Aussie Aussie Aussie: Dick Smith surrounded by children of Trunkey Creek Public School along with teacher Melody Bland and principal Sharyn Cogdell at Trunkey Creek’s 30th Annual Wool and Horse Festival. He was there to talk about the importance of supporting Aussie farmers and to open the festival. Photo: Phill Murray

‘… global human talent should be effectively utilised to provide viable long-term solutions, help improve our environment and to build an economy that is sustainable and vibrant*

There are people in our society who do not stand on the sidelines of history, but instead get up and make it. Once such Australian is 1986 Australian of the Year, aviator, businessman and entrepreneur Richard Harold ‘Dick Smith’ (1944-), the hero of everyman. An activist on every level and for all of his life so far, Smith has used his own enormous business success in the world of technology to help save and generate countless jobs for others by investing back into the society that has supported him. Dick Smith is a member of the so-called ‘Silent Generation’, who with the Aussie Baby Boomers are busy ‘shouting’ out loud wanting to be heard on a whole range of important issues. They are acting as mentors, offering their knowledge and experience for people everywhere to share. In the last year he has been particularly focused on assisting the growth of the Australian food industry and as an integral and important part of that generation still thinking outside the box is contributing brilliantly to Australia’s future growth, our country and its sustainability.

Dick Smith calls openly for an honest media and deplores that ‘open debate’ on facts surrounding the issues affecting the future of this country are constantly suppressed. So what is the future going to be if we keep avoiding talking about the issues surrounding sustainability. Will it also be about creating a multi-layered support system of people so that any area, be it rural or coastal, can sustain itself as cost effectively as possible? 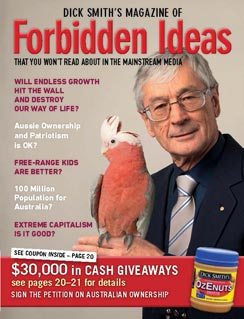 Dick Smith is certainly helping to lead the way. His ‘Forbidden Ideas Magazine is full of stories you won’t read in the mainstream media and he fosters discussion on a whole range of issues that are sensitive. He knows that in order to flourish we need freedom, energy, output + wisdom if we want to = intelligent eco smart, sustainable savvy cities in the future. Changing things from the bottom up will be the new way forward and that means involving and empowering everyone through knowledge.

Recently I watched the ‘Current Affairs ‘ program that documented his personal crusade to save the ‘Australian Grown’ food industry and it was very revealing, an indictment on those who continually put profits before people. Dick it seems was on the verge of giving up the food industry himself and he is certainly at the age where most people of his age have retired. But then that sight prompted and persuaded him to have one last shot at making it work. In his trusty helicopter he began flying all over our vast country helping battling farmers and small manufacturers who were fast going out of business. He helped by mentoring them to make the big changes needed so they could continue to flourish and supply city people with magnificent products that are Aussie through and through.

He is in fact getting us all ‘out of a jam’ by helping Australian farmers re-invent themselves for the new age of food production. Over the past year he has also provided an outlet so that they can sell their new products as well. His fabulous Online Dick Smith’s Magnificent Australian Grown Foods website has a shop with a splendid range of Australian produce to choose from, including countless gourmet options. Dick Smith is busy boosting our economy in both a patriotic and practical down to earth way one that has endeared him to many. He and his team deserve all our support as they help country people come to terms with the new age of production, branding, marketing and on-selling their wares. The stories he tells about the unique Aussie independent grocers and small businesses he has encountered during his odyssey are indeed heart wrenching.

He reports that virtually every successful company in our food industry has been taken over by foreign multinationals and all the profits are constantly leaving our country. It’s not something that can go on. We all need to pull our weight globally by ensuring that individually we also remain viable. He’s helping Aussie farmers find ways to accept reduced prices so that they can compete on a global market as well as here locally. More and more original Australian “digger” brands like Vegemite and Arnott?s are now foreign owned. Dick Smith wants Australians to support him to fight back and see a more even balance between Australian products and foreign products in our shopping trolleys.

He’s urging us all to buy Australian where and when we can.

Dick’s new OZE range includes OzEnuts, OzEmite, OzEjams and OzEsauce. The sauce is made from magnificent Australian-grown tomatoes (not imported paste) and produced in Cobram, Victoria, employing Aussie workers. Dick says “Surely it’s worth 30 cents more to have the best tasting sauce, support our farmers and know that the profits are staying in Australia!”

The Dick Smith company policy on foreign investment is in itself statistically revealing. The driving force behind the establishment of Dick Smith Foods was the realisation of the fact that in Australia 85% of the products in the average Australian grocery trolley are either imported or made by foreign owned companies. This results in $100 million a day going outside Australia. By comparison, in Japan, 98% of goods in supermarkets are owned by Japanese organisations.

Dick Smith argues that there are two key reasons to support Australian owned companies – profits stay in Australia and jobs are created for Australians. Quoting the source from AusBuy, he suggests that if every Australian redirected $10 per week from foreign owned companies and foreign made items to Australian products, Australia would save $4 billion per year and create 100,000 new jobs. It is available online or physically at Belrose in Sydney. 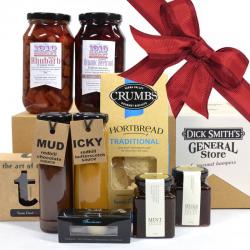 Give the gift that matters to your fellow country-based Aussies this Christmas, give Australian brands and join Dick Smith in giving beyond self. Watch the “Dick Smith” Current Affair story that made the difference.

* Sein-Way Tan, Chairman and Group CEO of Green World City based in Sydney, Australia says “We believe cities should have air and water that is clean, power that comes from renewable sources, transport that does not pollute, effective digital connection and efficient management of resources. Global human talent should be effectively utilised to provide viable long-term solutions, help improve our environment and to build an economy that is sustainable and vibrant” . GWC is supported by many ‘Green’ organisations, including the United Nations.