Ordered by Hitler near the end of World War II to reduce the city of Paris to rubble, if General Choltitz had succeeded millions of people would have died and the aesthetically beautiful City of Lights extinguished forever.

Chosen to confront and converse with the General the Swedish Consul understands he has the fate of the French people and the glorious city of Paris on his shoulders, which is basically hinging on his choice of words and his skill at the art of persuasion.

He has only a few hours to save Paris from annihilation. Directed brilliantly by Voker Schlöndorff, this tension-filled psychological game of cat and mouse, which reveals the art attached to political negotiating is a tour de force delivered by this highly capable dramatic duo.

They give the performances of their lives in a story that will stay with you long after you have left the theatre.

There are not many intelligent, absorbing and dramatic scripts around for actors of a certain age, however this masterful screenplay by Cyril Gely and German filmmaker Volker Schlöndorff based on Diplomatie, a play by Cyril Gely is gripping in the extreme.

Arestrup and Dussolier both have had outstanding careers in the theatre and film and first appeared together in this work when it was a stage play. It grabs hold of you in the first few scenes and holds you captive throughout. 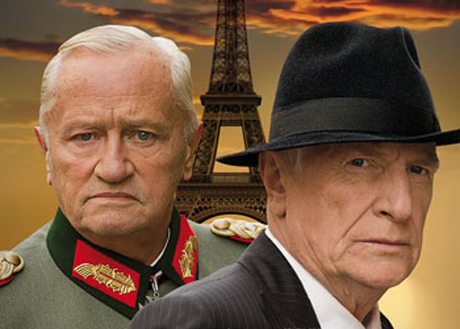 It is the final hours of World War II (1939-1945) and Germany’s leader Adolf Hitler (1889-1945) has charged General Choltitz with the total destruction of all the monuments of Paris, which is in disarray as the German troops all over the city leave

Paris at this time is a layering of art, architecture and civilisation that has evolved over centuries, including a wonderful array of ancient buildings left untouched by Georges-Eugéne Baron Haussmann’s modernisation program for the city, which took place during the 1860’s under the direction of the President of the Second French Republic Napoleon III (1808-1873).

Members of the Resistance are also appearing all over the city doing their best to kill as many Germans as they can before the force of allies liberate the city. In the two weeks since the General has arrived at Paris to carry out his dastardly orders he has been aided by a small force of men loyal only to him in a race against time and unfolding events.

Choltitz’s men have captured a Parisian engineer, the very frightened Mr Lanvin, who has no doubt been forced on the pain of death of those close to him, to assist planting mines on all of this beloved of all cities most important landmarks. Key historic building have been loaded up with explosives and the ignition leads all link back to a basement location in one building that only the General and a few of his soldiers know about, where they are awaiting his instructions to press the button.

Communications are proving hard to maintain and the timing and difficulties in bringing the men a radio through the streets littered with the Resistence so that they can hear the General’s go ahead have been compromised. The buildings targeted and destined to be blown to smithereens, include Notre Dame de Paris, Le Louvre, the Place de la Concorde, le Tour Eiffel, the Paris Opera and all of the cities bridges, except the Pont Neuf.

Those parts of the city not destroyed will be swept away as the River Seine floods.

We first meet the General in his glorious office, a room in the Hotel Meurisse with eighteenth century painted timber-lined boiserie, gilded columns and lighting and a mixture of glorious ‘ancien regime’ and Empire style furniture.

He’s a blunt, hard stern man, issuing orders rapidly as he gets dressed helped by his batman.

Suddenly he doubles up in pain unable to move of act until given him pills, which take a few minutes to work, but enable him to continue.

This also allows us to know he is vulnerable. He finishes dressing and is getting into his day barking orders left and right when quietly and suddenly a very dapper elegant man in a dark suit, tie and hat appears standing quietly in the middle of his office.

Nordling has ascertained that the timing is right for him to insinuate himself into the room so that he can begin sensitive diplomatic negotiations with the German general to have him change his mind and abandon Hitler’s plan.

He has arrived mysteriously as we learn, by coming through a secret jib door in a corner panel that hides a staircase leading to a back street.

The secret entrance has only been known to a few ‘top people’ who know the elite stories about the  buildings in the city and, most especially, about the intimate details of the love life of the aforementioned former leader of 19th century France Napoleon III. He reputedly had a regular assignation with one of his many mistresses who lived in the very room where the General finds himself ensconced.

As the conversation proceeds we also discover it has a two-way mirror and so Nordling already knows what Choltitz has planned.

Nordling and one of the waiters in the hotel loyal to the Resistance have used the staircase niche and mirror to inform them of the German High Command’s movements ever since they have been in Paris and have occupied the hotel.

They are not worried about sharing the secret now they know the end of the war is only hours away. However they are still unsure of where the demolition room is sited and so need that information.

Nordling needs to have General Choltitz question whether or not he should obey his orders at all costs, or if he should allow his own conscience to rationalise the decisions of a clearly now demented Hitler, who is not behaving rationally or reasonably as he ‘loses control’. This movie is a wonderful lesson in how Diplomacy works and why the art of conversation is such an important and integral aspect of government life around the world. The French honed the art of conversation in the eighteenth and nineteenth centuries and it is no coincidence that for centuries it was the language spoken at all Royal courts.

Choltitz is a hard man, who isn’t seemingly dismayed or worried about the horrendous loss of life as Nordling endeavours to convince him otherwise.

Then quite suddenly he has another of his ‘attacks’ requiring his pills, which he has to appeal to Nordling to fetch for him from his desk drawer.

Nordling hesitates only momentarily and being a true humanitarian then acts and fetches the pills. After the General recovers he questions his act and this cleverly provides that moment of vulnerability

Nordling has sought and Choltitz tells him that Hitler has threatened to kill all of his family if he fails in his task.

In the end the fate of millions all comes down to the strengths or weaknesses of just these two individuals.

Nordling has both the people in place and the ability to save the General’s family but will Choltitz confess and choose to save Paris?

We all know the answer now but that doesn’t for a moment let us off the hook of wanting to follow what happens all the way through to the final moments of the incident and arrival of the allies in the city centre. By choosing Paris Choltitz receives only a light sentence for his war crimes serving only two years before going home to his family. Nordling we learn has passed over to him the medal he receives from the French government, personally recognizing the former German general as the real hero.

I really responded to this movie on many levels and so for me it was a 4.5 out of 5. BBC1 live chat show host Graham Norton is engaging on every level, making it impossible for his celebrity guests on the red couch not to tell all their secrets