Disney On Ice was founded in 1980 and in 1981 Feld Entertainment produced its first Disney-themed show.

For over thirty five years audiences have been enchanted by the range of popular Disney characters merged with the magic of family-oriented ice spectaculars.

In the production recently touring Australia and New Zealand, audiences were invited into a musical showcase where they encounter Ariel (The Little Mermaid), Belle (Beauty and the Beast), Rapunzel (Tangled), Anna and Elsa (Frozen). These cherished characters and their stories come to life on the ice. The hosts for the performances are Mickey and Minnie Mouse, Donald Duck and Goofy. As they skated onto the stage the audience cheered with excitement and anticipation.

Many children in the audience wore dress up costumes or outfits with Disney logos. The colours fabrics and glitter set a mood of playfulness and expectation. The children’s excitement, sense of wonder and the joy on their faces was a gift in itself.

When darkness descended the sparkling lights from the special torches the children waved reflected the twinkling stars in the night sky. The musical splash began deep beneath the waves as Ariel burst out of an underwater cave skating and singing Under the Sea. A 1980’s medley erupted and an explosion of pop moves and rocking waves got the ice party started.

Sebastian the crab, the court composer in The Little Mermaid scuttled across the stage on his skates. He was encrusted in a thick orange shell and armed with a pair of claws.

The mermaids “strike a pose” and hit the ice floor moving and grooving their bodies to Madonna’s Vogue and having the time of their lives bopping and twirling to Cyndi Lauper’s Girls Just Want To Have Fun.

The jelly fish, stingray, seahorses, starfish and eels synchronised movements revealed the fabulous fluidity of the under- water world.

Strikingly contrasting was the aura crafted by the costume of the wicked sea witch Ursula, with her dress of black ugly tentacles and a mask of hideous evil. Ariel’s solo rope dance exhibited her talents for balance and grace high in the air above the audience. This breathtaking performance soared with strength and the beauty of elegant and nimble movement.

The logical and organised progression of dance phrases lead intuitively to the next set of moves. Transitions from one sequence to the next were inventively designed to contribute to the unity of the dance and the connection to the story telling. In Tangled, the skating of the horse was mesmerising as it glided with charisma across the ice frolicking, jovial and defiant.

The classic floating lanterns were a fine tribute to Walt Spangler the Production Designer. They subtly glimmered and glowed in honour of the lost princess on her birthday. This was a captivating moment as a soft velvety light lingered in the darkness.

There was a massive finale as all the dancers assembled to herald and welcome home the princess. Shades of noble purple twirled in the flags, swivelled in the curtains and illuminated the festivity. The stage was awash with joy and celebration as the ice skaters concluded the first half of the ice extravaganza.

After interval the boastful, flirtatious, vain and handsome Gaston surged onto the stage with vigour and sinister intentions.

Belle in contrast wove her sweet innocence and idealistic aspirations into her serene dance sequences and splendidly executed spins.

In her wanderings, she discovers a strange and sombre castle where Mrs Potts a teapot, Chip a cup and saucer, Lumiere a candlestick and Cogsworth a clock befriend her. They are all hopeful Belle may be the liberator breaking the curse on the beast and his household. They moved across the ice with ease and nurtured a sense of wonder and imbued an essence of contagious humour. This was further enhanced when Belle was invited to dinner and the knives and forks also came to life cavorting and skating with spectacular speed and unison. Music is an integral part of the Magical Ice Festival and the Beauty and the Beast single won a Globe Award, Academy Award and Grammy Award for Best Original Song. This emotional and inspiring song ushered a hushed awe in the audience.

In Frozen the kingdom of Arendelle is trapped in an eternal winter. This majestic kingdom was skilfully recreated on stage and the fog, falling snow and pyrotechnics were spectacular. The luminous effects, lyrical music, astonishing costumes and expressive choreography built a magical climax in this beloved contemporary fairy tale.

Anna set off with her new friends Kristoff, his reindeer Sven and the living snowman Olaf to find Elsa and thaw her kingdom. Meanwhile Elsa retreated to the top of a mountain and built an impressive shinning ice palace. She removed her cloak to reveal a blue iridescent costume textured with light and shimmer and her haunting voice sings.

“Let it go, let it go
Can’t hold it back anymore.”

These familiar lyrics resonated with the audience as snowflakes silhouetted on the curtain and the gigantic silver snowflake covering the ceiling glistened.

A staircase of ice slid effortlessly across the stage building the entry to the ice palace.

Like all fairy tale endings love conquers all and Elsa’s icy spell is broken and Arendelle is saved. 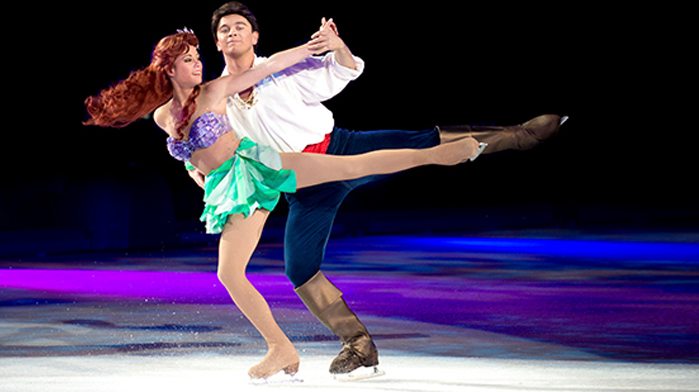 The figure skating jumps, turns, lifts and spins throughout the performance left the audience spell bound.

Every element of the Magical Ice Festival was conceived and executed with finesse and an astute understanding of the value of wholesome entertainment.

Exciting plots, hummable songs, endearing characters and astounding ice skating are the essentials that enchant audiences across the globe.