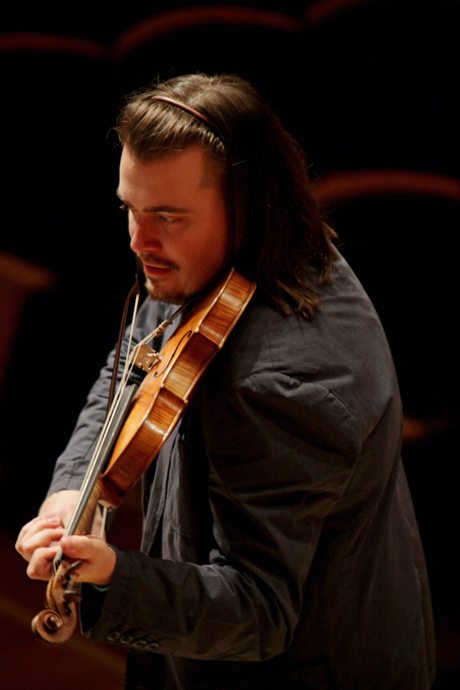 Oh my goodness, Francesco Ruggieri (1630-1698) must be in seventh heaven where he would have surely been weeping for the sheer joy of knowing the glorious instrument he so lovingly handcrafted over three hundred and more years ago was back in the hands of a true master of art.

Throughout his opening night concert with the Australian Brandenburg Orchestra (ABO) in marvellous Melbourne, the Russian born multi-talented superstar and demi-god Dmitry Sinkovsky exalted art with breathtaking energy and brilliance of technique.

Together, and with his ponytail swinging deliciously in tune, he and his colleagues infused the acoustically wonderful Hall in the Melbourne Recital Centre on Saturday evening August 2nd, 2014, with truly awesome feelings of excitement, exultation, elation and jubilation. They celebrated the beauty of early music and bounteous gifts our freedoms in Australia allow us to enjoy.

They all contributed to enhancing our understanding about the mystery of our own often irrational feelings as we richly explored that interior universe to which we are all drawn, attracted by its complexities and contradictions; implying something more than simple emotion.

Sinkovsky completely re-defined creative genius. He let us know what is at the essence of great art; its ability to affect not only our perceptions, but also our emotions. He was completely captivating with his ever-soaring vitality. Dmitry Sinkovsky, on stage with members of the Australian Brandenburg Orchestra photo by Steven Godbee

Dmitry Sinkovsky is uniquely blessed; his ability to sing with a voice of such purity that both resonated and soared with ‘crystal-clear intonation’ was outstanding enough; his virtuoso violin playing went way beyond magic!

We were spellbound as his extraordinary ability seemed effortless. How Sinkovsky sings sweetly one minute and plays sensationally the next, is a feat rarely accomplished to his high degree of mastery. It was overwhelming in many ways for the audience.

He treated us with such care, endearing himself to us all with the rarity of his talent. He provided a performance far beyond what our imagination beforehand could have possibly conceived. Dimitry Sinkovsky also brilliantly revealed what perfection in artistry is about with almost religious fervour, one both adventurous and exciting in its intensity.

In some respects it was impossible to bear, nor would it allow us to sit still. My devoted Brandenburg buddy paid him what many would see as an ultimate compliment; likening him to the ‘Neil Perry’ of classical music, mastering an art of cuisine that made us salivate for more.

His passion together with the intrinsic strength of traditions surrounding Russian Folk dancing were evident in his spirited dance-like movements as Sinkovsky performed difficult works with great ease, playing them straight from the heart.

Noticeably, and with exceptional ability, Sinkovsky exerted incredible influence on an experienced ensemble of professional musicians, more usually known for their own outstanding combination of both style and vigour.

Playing that amazing Ruggieri violin he soared magnificently above the expanded force of the Australian Brandenburg Orchestra string players, along with chamber organ, theorbo, guitar and harpsichord. He performed both with ‘noble simplicity and quiet greatness’ adding his own level of mesmerizing brilliance. When required the orchestra responded, making musical magic.

The enriching notable and sensational sounds ensured it was hard enough to cope. Then when Sinkovsky, ever so lightly during his solos descended into a realm of unknown breathtaking beauty, you could easily hear a pin drop as time stood still.

His playing was just like a soft sweet whisper of breath shining out brightly in the luminosity of the icy landscape of a freezing cold Melbourne winter night – one of indescribable beauty.

Dmitry Sinkovsky began the concert with his back to the audience, electrifying the colleagues that following their rehearsal time and sensational Sydney concerts together, he now so clearly admired.

He galvanized them into more than action. He both destabilized and motivated them to go beyond self right along with him and they responded magnificently.

The immediate result was that before our very eyes they rose physically in stature as one to the glory of the occasion. They all exceeded what we normally understand as their usual high and excellent standard of musicality, as they moved onto a yet higher plane, one perhaps that was in some of its exquisite moments, even beyond sublime. 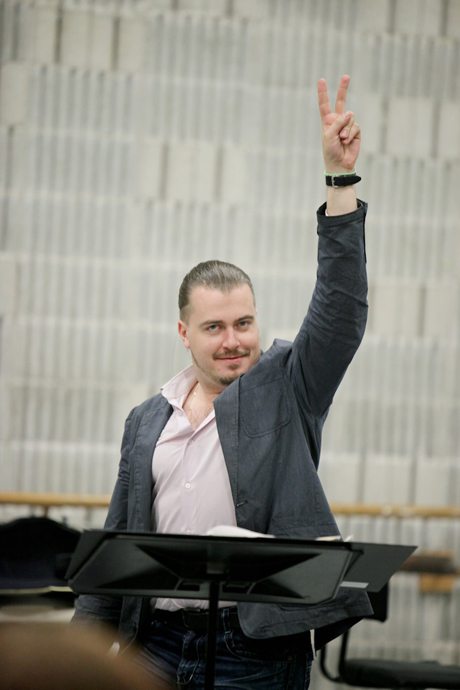 Dmitry Sinkovsky, in rehearsal with the ABO, photo by Steven Godbee

Director of the Australian Brandenburg Orchestra Paul Dyer AO was guided, as were his colleagues in awe by this outstanding performer throughout this truly amazing recital.

They responded on every level to his lead, producing an event that will live and resonate for a long time in the art of memory and as truly special event during their 25th anniversary year.

Amazingly this concert turned out to be all about redefining genius a concept that had engaged me in spirited conversation about what defines art with one of the National Gallery of Victoria’s talented guides when we met up in the foyer prior to the concert. It was like an amazing prelude or preface of what was to come.

All the works on the program were indeed astonishingly difficult and some rarely heard, offering Sinkovsky’s perspective as well as demonstrating so aptly his love of display and florid ornamentation as an aspect of music’s stylistic development.

The program for this glorious event featured mostly concerto by brilliant Italian composer Antonio Vivaldi (1678-1741) with changes and additions on the evening.

The first Vivaldi was the Concerto in C major RV 177.

The allegro moa poco was indeed very lively, the largo deeply affecting while the final allegro was charged with both drama and delight. Dmitry Sinkovsky, in rehearsal with the ABO, photo by Steven Godbee

He then played the truly wonderful Concerto Grosso Opus 6 No 11 in B flat major by Arcangelo Corelli (1653-1713) often called the ‘World’s First Great Violinist’.

The craftsmanship of his superb Russian ‘period’ violin (1675) made in Cremona by Ruggieri, helped him to elevate his performance way above the commonplace, making our hearts sing out gladly with grace and joy.

Poetically rendering the wondrous concerto form with a deeply affectionate rendition, Sinkovsky was joined by Brandenburg violinist Ben Dollman and cellist Jamie Hey, as he adoringly showcased Corelli’s mastery over repetition of form.

They superbly revealed how brilliantly the composer contrasted meaning with intrinsic beauty of style, as they echoed select passages, answering the call of the maestro with the violin.

It was delicate and delightfully decorative, demonstrating how and why Corelli was considered the ‘embodiment of classical Italian violin music’.

Vivaldi’s Concerto in d minor RV 246 was a learned lesson in Sinkovsky virtuosity. He provided the rhythmic drive, infusing this work with joy and drama, while expressing the character of its composition with energy, passion and lyricism.

He coaxed, guided and annotated its musical text so deftly and delicately as he cycled through its different tonal structures with great energy and enthusiasm.

It was like being on a roller coaster ride to heaven. After interval if you can believe it possible, the level rose even higher as Sinkovsky broke down barriers that exist between nations and men as he passionately sang from both the heart and mind.

He dedicated his very moving and achingly lovely rendition of the aria from Rinaldo by George Friderich Handel, Cara Sposa Amante Cara in memory of those who perished recently over Ukraine in flight MH17 as a direct result of the extreme tragedy of war – dearest heart, Where art thou? Woe! Return to him who weeps! O guilty spirits from thy Erebus beneath the furrows*, my face one of complete contempt, I defy thee…

His beautiful countertenor voice expressed so poignantly something more than just simple emotion as he moved restlessly, hair flowing and marking time with the music.

Sinkovsky took us all into that realm beyond greatness, one both extraordinary to watch and ennobling to experience…

…it was for me as if Handel was there expressively emoting; let me weep about my cruel fate, and that I should have and perhaps come to know such freedom. His soul-searching rendition of Vivaldi’s lovely aria lamenting lost love, Cessate, omai cessate, Cantata RV 684 for alto, strings and continuo was enthralling. He would play one verse and sing others, offering an assured voice for both, his fiery stage presence contrasting with the voice of an angel.

He then left the stage for his only respite of the evening as the Brandenburg’s chief cellist Jamie Hey gave an assured solo performance leading his colleagues who happily supported him in playing Vivaldi’s Cello Concerto in a minor RV421 with great dexterity and skill.

The 2nd movement saw Jamie Hey on cello with the gifted craftsman Tommie Anderson on Theorbo, an impressive highlight of this lovely work.

The magic continued with Vivaldi’s Concerto in d minor RV 242 Op8 No 7 ‘Per Pisendel’- Johann Georg PIsendel 1687-1755, being the leading German violinist of his day. It was wonderful Vivaldi, the  second movement was sublime.

By the end of concert program Dyer was at a complete loss for words when endeavouring to express how he and his colleagues felt after performing with Dimitry Sinkovsky in his Australian debut. And then to top it all off we were treated to a musician’s jamb session like no other.

Coaxing his violin to give yet more on his behalf, we all felt deeply the simple joys that accompany the arrival of spring, the heat and vibrant warmth of a summer day and the soulful intensity of a freezing cold Siberian winter as Dmitry Sinkovsky re-imagined the red-haired Italian priest Antonio Vivaldi’s glorious Four Seasons. Soon to become his next CD, the warm and welcoming ambiance integral to this extraordinarily generous encore followed continual rapturous applause and a well deserved standing ovation.

Then after four exciting encores, he presented his fifth and final work by Tomaso Albinoni (1671-1751) that let us all come down from the high by delighting with its melodic charm.

There is no doubt that Australian Brandenburg Orchestra fans and followers will be begging Paul Dyer to bring Dmitry Sinkovsky back for yet more. I am adding my voice to theirs, urging him on – so please Paul make it happen.

Today the measure of great art is not just about looking, but also seeing and feeling. It demands that we accept and explore the whole range of human emotions we have available to us.

After it was over all I could think of was how, in the future all my senses will be actively engaged with my own art of memory about the rich rapturous, joyous sounds of early music played with joy and love by Dmitry Sinkovsky and the Australian Brandenburg Orchestra

I could not wait to be  back at my computer, rapturously writing my review. What a year you, and the ABO are having Paul Dyer! You must be beyond elated!

Louis XIV (1838 – 1715) was known for being dignified, gracious, exquisitely polite and never blamed his generals for a defeat. His reign 1661 – 1715 was of incomparable brilliance. French art and literature flourished and artisans, included the celebrated playwright Jean Baptiste Poquelin Moliére (1622-1673), dramatists Pierre Corneille (1606-84)…