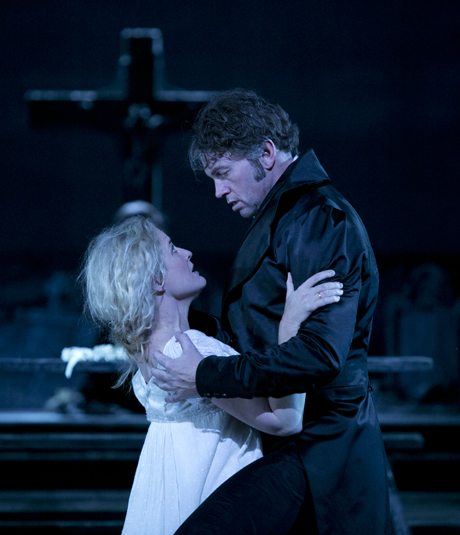 Is he a dandy or a dog? Squire or sex addict? Romeo or rapist?

These are the questions that I found myself asking after experiencing Sir David McVicar’ version of Wolfgang Amadeus Mozart’s 1787 Opera Don Giovanni recently.

Friday the 25th of July was opening night for the winter season of one of the most well known operas in the world.

It was a full house swarming into the iconic Sydney Opera House for the performance and the “House” was buzzing with excitement as to what lay ahead for this the grand premiere.

Would it be a taste of what is to come in the future from the collaboration between Opera Australia and McVicar?

Over the next three years it is planned that we will see Don Giovanni, The Marriage of Figaro in 2015 and Cosi fan tutte in 2016 all overseen by this world-class director.

Born in Scotland and knighted in 2012 in the Diamond Jubilee Honours List, Sir David has a myriad of wonderful productions in his highly skilled repertoire. It is a great coupe to have him join Opera Australia for this tenure. 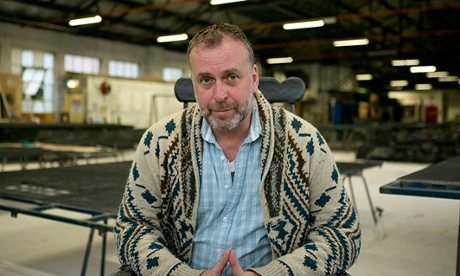 With a stellar cast including the tremendous Teddy Tahu Rhodes as the “licentious young nobleman” we are led into the dark, menacing underworld that Don Giovanni inhabits, a product of his lecherous ways.

With amazing acoustics, this would be a stunning venue for any special night all on its own.

The set by Robert Jones was truly triumphant, with the piece de resistance being a fabulous staircase being lowered as the orchestra baits the audience with its sublime sounds.

A wonderful use of chiaroscuro flawlessly draws the audience into the shadows. Jones is an associate designer of the Royal Shakespeare Company 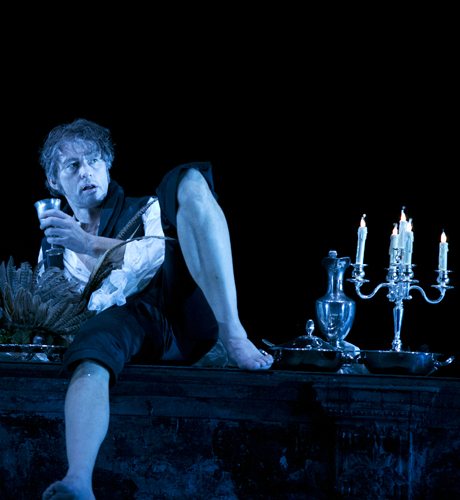 The dark, moody lighting designed by David Finn who has worked with director David McVicar before, superbly sets the scene of a pre-romantic era, a dim world where class distinctions are paramount.

Enter Leporello, manservant to Don Giovanni, waiting tensely outside for his master. Out for another notch in his well-worn belt, Don Giovanni has crept inside the home of Donna Anna, with hopes of seducing the Commendatore’s daughter.

Sprung by her father who immediately challenges the lothario, a sword fight ensues to which Don Giovanni slays the protagonist.

Don Giovanni and Leporello then escape and Donna Anna vows revenge for her darling fathers meaningless death. So starts the murky ride to the demise of Don Giovanni.

The costumes are stunning and I was excited to see the finished product on stage as a few weeks before I had been privy to some of these on my wonderful tour of the costume department. Lyn Heal and her team certainly deliver, and the wigs are fabulous too. I was so lucky to have seen these garments up close. Must say I love going to Sydney’s most iconic building and always feel it is worth the respect to both the performers and other patrons to dress up, making it a special night out.

Drinks in the Utzon room at interval were a very special treat.

This room is the only remaining wholly Utzon designed space in the building decorated as it is with the vibrant 14 metre wide tapestry designed by the architect himself, Jorn Utzon.

That said, personally I found this production of Don Giovanni to be very confronting.

I had always thought of the character as more of a Don Juan, a sexy seducer and those women were more than happy to succumb to his irresistible charms, not so.

It was more lecherous bull that stalked the stage, hunting women as he pleased, giving no thought to consequence. And why should he?

As a nobleman he has every right to claim maidens of the land and does so with relish.

But, it is a poetic demise for our anti-hero, drawn to the depths of hell for refusing to repent his sins of the flesh.

Did I feel sympathy for him? No.

Did I see his lighter side? No. My emotions were charged and relentlessly guided by this very dark interpretation of perhaps Mozart’s most famous opera.

Don Giovanni balanced precariously on a knife’s edge, with only two allies, Leporello and a past conquest Donna Elvira.

Even then they both wavered in their capacity to believe in the good of the ‘hero’ that I could only view as a cad.

His ultimate demise into the depths of hell was inevitable, and I have to say, that I felt he would deserve all the punishment that would be meted out to him, such were my emotions engaged. The cast was incredible. 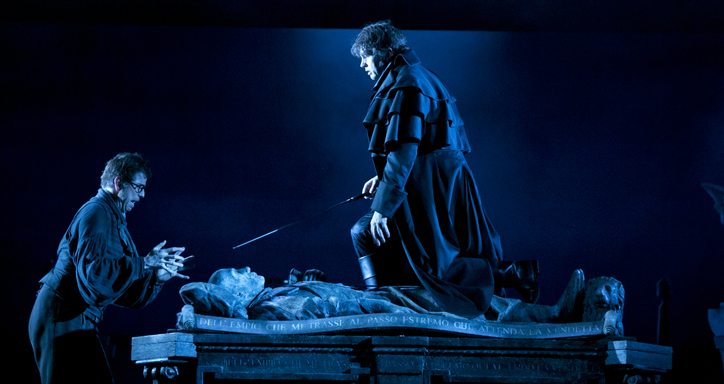 Must add that I really loved Shane Lowrencev playing Leporello and Taryn Fiebig as Zerlina, the young bride of Masetto… other than that, words fail …