Rhodes is the man who will ensure that OA’s serial seducer from Saville, the libertine ladies man, will serenade us all back from the very gates of hell itself and swell opera audiences.

Don Giovanni (The Libertine Punished) is one of Mozart’s most famous operas, based on a libretto by Lorenzo da Ponta.

Italian author and adventurer Giacomo Casanova (1725-1798), himself a famous womanizer of that era and friend of Mozart, was reported as being in the audience in Prague on its October opening night.

When it was performed in May 1788 in Vienna, Mozart had added a comic scene and a new aria, underscoring the action with his marvellous music full of drama and pathos,

It was a resounding success and has more or less remained in opera repertoire all over the world ever since. Not entirely understood during his own short lifetime, within a generation of his death Mozart’s Don Giovanni was considered perhaps the greatest of all operas.

The dashing English poet George, Lord Byron tried to re-invent the Don for his own romantic age, twisting the story to suit his own truth… helping form the dashing image of the ‘dark hero’, the one we favour today…

I WANT a hero: an uncommon want,
When every year and month sends forth a new one,
Till, after cloying the gazettes with cant,
The age discovers he is not the true one;

Of such as these I should not care to vaunt,
I’ll therefore take our ancient friend Don Juan–
We all have seen him, in the pantomime,
Sent to the Devil somewhat ere his time.

The tale of the legend tells how Don Juan (Don Giovanni) seduced a girl of noble family and then killed her father when he sought revenge.

Later the Don, seeing a ghost of her father flippantly invites it to dinner, never dreaming it will come.

He’s in for a big surprise! When it arrives for dinner it foreshadow the Don’s death. This is one of the highpoints of the opera by Mozart, which is all about people succumbing to the power of one personality.

Disguised by wearing a mask, but definitely a stand out in short leather shorts and thigh high boots while dashingly wearing a cape as well, it’s only when Don Giovanni tries to seduce the Commendatore’s daughter Donna Anna that his lecherous life begins to unravel at long last, causing other men to cheer.

Teddy Tahu Rhodes will be a fine Don Giovanni there is no doubt. His sensational voice will boom somewhere between bass and baritone as he gives the role many believe he was ‘born to sing’, new magnetism.

McVicar and Teddy Tahu Rhodes are really interested in the ‘dark side of Giovanni, not making him charming. Rhodes oozes the most attractive qualities of legend’s infamous Don Juan; a towering presence, sensational verve and vitality, good looks, arrogant courage and just a touch of good humour. He’s performed this role before for OA, but it was the previous version. This is the one I remember fondly when a dashing youthful baritone Jeffrey Black made the role his own and had enormous success with it all over the world for decades.

Rhodes in his previous incarnation opted for the leather short shorts, rather than Black’s famous leather Speedo!

Will be interesting to see what set and costume designer Robert Jones clads the Don in this time! After all he’s meant to be a dashing and very daring chap! Fashion Elixir’s Jo Bayley already has an idea, having spent a great deal of time in the past month or so visiting Opera Australia‘s sensational costume department and writing a story about it for the Circle.

She has certainly had a grand time discovering just how and why they are so good at fooling us all into believing that the stars on stage are the characters we have come to love in our favourite operas.

As Don Giovanni so definitely finds out, Donna Anna was definitely the wrong lady to pick. Her shrill cries and powerful protestations will ensure the only route open to him in life in his future will be the one that will assuredly take him down into the burning fires of hell for all eternity. Will you fall for my charms... Teddy Tahu Rhodes in Don Giovanni, courtesy Opera Australia David McVicar is hoping the audience will react in a way ‘that demonstrates that the underlying social conflict and sexuality that simmers beneath almost all of them’ is alive and well.

After all whether the audience are young or old, it is their perceptions about the Don and his winning ways, or so-called lecherous intentions that really count.

McVicar is considered by some opera’s bad boy, although reputedly a big softie at heart. It certainly takes his sort of genius to take on such a project in the first place. It’s a risky business.

Teddy Tahu Rhodes’ glorious unique voice will definitely resonate long after audiences have left this performance of Mozart’s master work, as one they will never forget.

The roles in South Pacific and in the King and I Rhodes has been playing all over Australia has brought him into the arena of popular audiences, ensuring the return of the grand musical is also a resounding success, while giving Opera Australia a new genre to explore.

It’s in the tradition of Mario Lanza at the movies, taking opera way beyond the hallowed halls of the world’s opera houses, which has to be a good thing if we all want this wonderful genre to remain relevant in the future.

It has very well done by Lyndon Terracini, artistic director of Opera Australia who believes, as so many do including me, that opera is for everyone, it’s how you encounter it that makes the difference.

Left in a tender moonlight situation,
Such as enables man to show his strength
Moral or physical On this occasion
Whether his virtue triumphed, or at length
His vice–for he was of a kindling nation–
Is more than I shall venture to describe,
Unless some beauty with a kiss should bribe Teddy Tahu Rhodes has performed in all the great opera houses of the world, in a career that has seen him singing a wide-ranging repertoire.

With his very own swaggering style of dark charm, Rhodes is guaranteed to set many a girl’s heart a racing, as they all pray for the Don to be saved.

In the meantime many people will remain on the earth, but with their eyes freshly opened up to what salvation, forgiveness and redemption are really all about.

Perfect she was, but as perfection is
Insipid in this naughty world of ours,
Where our first parents never learned to kiss
Till they were exiled from their earlier bowers,
Where all was peace, and innocence, and bliss,
(I wonder how they got through the twelve hours),

Like so many singers today she has developed an international career, one that sees her travelling far and wide as a principal guest artist.

She is reported as saying she loves coming to Australia, where she has been performing for Opera Australia in various roles over the last decade including the ‘seductive’ Violetta in La Traviata. 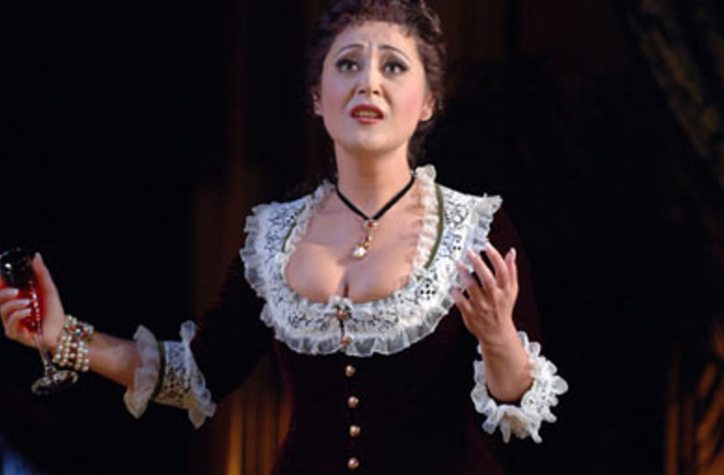 She performs regularly in Turkey to much acclaim, which amazingly has six opera houses and a wonderful appreciation of opera as a medium and aspect of their rich cultural tapestry.

Australia’s very own incredible soprano Nicole Car will play the role of Donna Elvira, alternating with Jacqueline Dark. Nicole is outstanding. Hers is a ‘full-bodied honeyed voice’, one guaranteed to lure any man to ‘do wrong’. I heard her recently singing the role of Tatyana in the opera Eugene Onegin at Melbourne. To say she was a triumph isn’t enough – her voice was pure, beautifully paced, never forced and really quite remarkable. It’s certainly one I really relate to.

Shane Lowrencev will be Leporello, Don Giovanni’s servant a role he should relish as he has a wonderfully assured voice and a great sense of comedic timing.

NZ born singer Jud Arthur will undoubtedly command the stage as the Commendatore. The opera contains some truly memorable Mozart moments with arias such as Madamina, il catalogo è questo, The Catalogue Aria sung by Leporello about the Don’s exploits.

Then there is Fin ch’ han dal vino, or The Champagne Aria, which is sung by Don Giovanni,himself.

His enemies gradually hounded him to destruction goading him to defy even the ghostly forces of the unknown but in the end he refuses to repent and is eternally damned.

Don José, like a lineal son of Eve,
Went plucking various fruit without her leave.
He was a mortal of the careless kind,
With no great love for learning, or the learned,
Who chose to go where’er he had a mind,
And never dreamed his lady was concerned;
The world, as usual, wickedly inclined…

The Wyeth family are a multi-layered set of personalities in the play Other Desert Cities, which is testimony to the skill of good writing and great acting