‘Compulsively watchable’ it is now 1925 and changing times are upon us. The first two episodes of his classy star-studded English soap opera on a grand scale with its amazing team of high profile British actors, reports our London correspondent is a delight to date.

Julian Fellowes doesn’t treat the past or his people differently or delicately as he moves at a rapid pace with constant surprises; shades of the first season when we all fell in love earnestly with the people from upstairs and downstairs.

The first two episodes were filled with action and outcomes. This includes the indomitable Maggie Smith as Dowager Duchess and the steady Hugh Bonneville as her son Lord Robert Crawley, doing his best to deal with the new age of change overtaking them all. It’s his job to ensure his estate survives into the future and that his faithful retainers are rewarded.

However can he offer them his loyalty and keep them all in employment when wages since the war have trebled, while income has remained the same or decreased?

Downton Abbey has over its six seasons given us a great deal, an insight into the world of our ancestors when time seemed to have been evolving slowly for centuries before the ‘halcyon days’ prior to World 1.

In the finale season that change is now becoming rapid, some seven years since it ended.

The system had formerly allowed each to be generous to each other, although each on their own terms. Upstairs people enjoyed the status quo that had allowed them to live the lives they wanted without having to worry about the people below stairs attempting to ‘rise above their station’…they were happy for them to know their place and keep it.

Downstairs people relied on Upstairs people to keep them in work all of their lives and care for them in old age… it was their entitlement they believed, especially after giving one family a life’s worth of service.

Bunking down with your Butler in a muddy wet trench in the ground while waiting to die however had changed everything.

It was far too big an experience for either to survive without highlighting how down the years they had both learned to rely on each other in a socially arranged hierarchy.

Season Six of Downton Abbey is all about the two extremes of historical continuum, from the ancient past to the distant future.

Highlighting the frailty of our humanity Fellowes keeps it all moving along at a good pace, shades of Season 1.

There is a freshness about it, and viewers are completely engaged as they come to terms with change.

Perhaps we are hoping our friends at Downton Abbey will help us to make the right decisions in life, so we don’t have to always learn from our mistakes. Please, don’t read any more if you don’t want spoilers. World War 1 marked the great divide in the age of the moderns. By 1925 Modernism was in full flight as was the rage for simplicity a lack of complexity, without complication, with no embellishment or difficulty.

The upheaval of war brought everyone face to face with an alternative; either a clean sweep or hope of a reformed society, or alternatively the retention of a privileged art in the service of an elite and moneyed class.

The first two episodes highlight the fact Julian Fellows has a skill of making his now familiar Members of the Poshocracy and their faithful Retainers part of our extended family. It all starts on the day of the hunt, which is now on its way to becoming an anachronism; completely out of touch with the changing modern world.

All the signs are there if we but look; Lady Mary (Michelle Dockery) is wearing trousers not a skirt and riding astride, not side saddle, which her father Lord Robert Crawley (Hugh Bonneville) is totally out of sorts with.

As they leave Mary notices a woman standing on the drive and it intrigues her. She points her out but her father does not recognise her either. Who can she be? Will she be a problem, one they have to solve together? Only time will tell.

We shouldn’t feel any sympathy for him, he’s ‘dodging’ confrontation as the village hospital board meets to discuss the future of the local hospital he’s both trustee and patron for… he really should be there, not carrying on with an ancient ritual. The meeting is a fiery affair with both the Dowager Lady Violet (Maggie Smith) and Isobel Crawley (Penelope Wilton) going head to head – does it ever get cold on the moral high ground the Dowager asks?

She is wanting to keep control of the hospital and champion its independence. Isobel wants to merge it into a larger hospital group to improve conditions and outcomes for patients, by gaining access to new equipment and it becomes a matter of vexation for all.

Lord Robert learns his neighbours are laying-off staff, confiding in his mother they will likely have to do the same. He advises the family ‘we mustn’t crow’ we may be next as he also discovers they are selling up all their possessions, including family portraits.

The family goes to attend the auction where Lord Robert is advised to ‘live for the moment’, because no one knows what the future will bring as the family’s treasures are all put up for sale.

Face it, he’s also told, there won’t be a house like this standing in 20 more years. A very uncomfortable moment happens when Daisy turns up to the auction with Mr Mason who has become like a father to her.

He’s in fear of being turned out of his tenancy by the new owners who are outraged when she takes them on first hand.

The family is all horrified about her embarrassing them in public but in the main they are worried for him as he’s elderly and they know the reality is that it will be hard for him to find a new place to be.

Lady Grantham’s maid Denker totally oversteps the mark, spreading the news about laying off staff to the ‘Abbey’ after being sworn to secrecy. When the Dowager ticks her off in front of Isobel who questions her for doing so, she retorts with a wry smile, “… sometimes its good to rule by fear”.

Down in the kitchen the Downton Abbey children George (Lady Mary’s son) and Marigold (Edith Crawley’s secret child) are being urged on by Mrs Patmore to lick the bowl.

She is the kindly, bark is worse than her bite Cook, that we would all like to prepare our daily meals. Daisy, Anna and Bates, Thomas, Molesley and Andy are all there still, although Thomas believes if anyone has to go it will be him and it causes great angst.

Mrs Patmore is very concerned for her friend the Housekeeper Mrs Hughes who’s clearly deferring setting the date to marry the man she’s been in love with for years, the Butler Charles Carson who proposed at the end of series five.

Not content with Mrs’ Hughes excuses for not making a decision, Mrs Patmore meddles so she can help them both come to terms with the difficulty. Talking about expected ‘wifely’ duties is still a taboo subject, even between two people who are engaged.

For Mrs Patmore (a maiden lady despite her moniker) it’s very hard, but in great style she meets the problem head on by talking to Carson.

Help she does and thankfully having resolved the matter they move on to the next stage arranging the wedding, but that’s not going to be easy either. Lord Grantham offers to give them a reception below stairs causing Mrs Hughes to get her back up. She wants ‘her day’ to be about her and not about being a servant. Lady Mary is horrified when she finds out and offers Carson any of the grand rooms upstairs, which he would like to accept because she is like a daughter to him. Oh dear. It will be interesting to see who wins.

Lady Mary is taking charge of running the estate now Tom has left for Boston, where a letter tells us all is going well.

These first two episodes highlight the success Suffragette’s have had in raising the profile of women, urging them to expect an equal moral standard and for men to live by the same standards they demanded of women.

The sad and lonely Edith is taking on the editor of the magazine she’s inherited when the love of her life… died and left it to her.

She’s thinking of moving to the flat he left her in his will. It’s in a fashionable part of London, and so she has to decide if she wants to ‘get a life’ of her own, although she knows it will be easier said than done.

The most important thing is she doesn’t want to leave her child Marigold behind at Downton Abbey , so how will she choose.

The problem is that only her parents know that Marigold is hers, Edith being entirely unhappy about sharing her secret with her sister.

Lady Mary with her stylish short cropped hairstyle is growing in confidence, determined to help lead the way by offering a fine example of a woman in business. Brains before muscles, both Mary and Edith realise this is not going to be an easy road to hoe either.

By now everyone is hoping they could really go back to the Edwardian age when everything ran like a well oiled machine upstairs and downstairs and life was lovely.

Mary now a ‘farmer’ seeks to show the estate’s pigs, which were raised by Farmer Drew the tenant on their estate. His wife is still traumatised from Edith removing the baby Marigold from her early care. 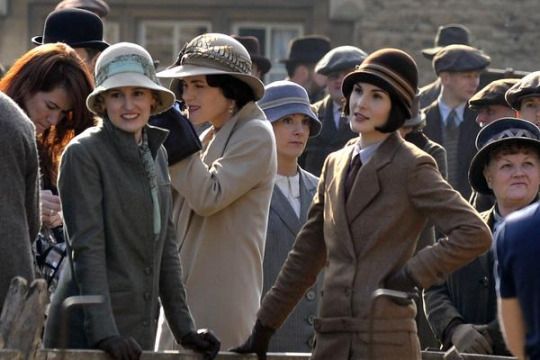 Mary wants to support the local shows as well as the larger ones in London and the unsuspecting Mary (not in on the secret) takes both George and Marigold to the village’s great day out with the rest of the family, when Edith’s in town.

But Marigold disappears suddenly and throws them all into disarray until she’s found and we know that the event will be sure to have consequences.

Dear Anna and her wonderful Bates are also dealing with further disappointment, the loss of a much longed for baby.

This causes Lady Mary to meddle so she can help her faithful ladies maid, taking her to London to meet her specialist on Harley Street.

Anna and Bates both still have the charges laid against them. But there is some good news after all, they are cleared at last… bring on the gramophone for some dancing music! All of Upstairs descend Downstairs to enjoy Veuve Cliquot, celebrating by toasting British Justice, the envy of the world.

King Charles II made promenading in the park fashionable and within a decade English parks were places for perfect parleys, parades and promenades – Rus in urbe