No family is ever what it seems from the outside* 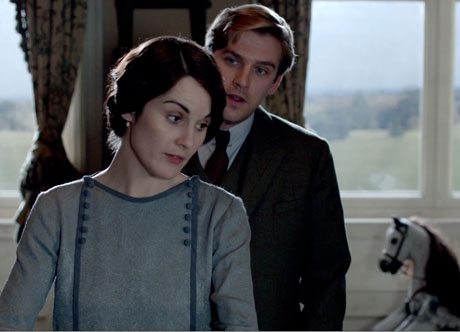 Downton Abbey Season 3 Episode 4, reports our British correspondent was much more sobering this week, so please don’t read any more if you like to get into the prevailing mood of your favourite weekly dose of drama as it progresses. On a whole there is a great deal of doom and gloom about as everyone seems to be facing up to the consequences of their actions in life.

Matthew is busy ‘pulling his weight’ as he attempts to catch up with all the management duties he needs to understand when running a large estate like Downton. He does try to assert his idea that things are different than they were before the war when Carson says he wants to bring the staff back up to speed however to no avail as Lord Grantham agrees with Carson.

Matthew and Mary do seem to be on happier terms now the money has been sorted and she has retained her position in life. She is busy spending it again, turning one of the old nurseries into a sitting room for them both and he’s disappointed when he broaches the idea of putting a nursery to good use and she puts the idea of their starting a family off until further down the track. Meanwhile Matthews mother Lady Crawley is working hard to assist her group of ‘fallen’ women. Doing good works was an important aspect of women with means way of life. 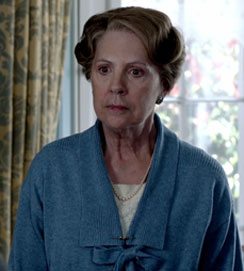 When Ethel the former housemaid from Downton Abbey comes to see her she’s snubbed by Lady Crawley’s housemaid, who doesn’t see that it is part of her duties to ‘wait on the likes of ‘er’. No compassion there. Goodness, those downstairs were always so much harder on those of their own ‘station’ in life. Ethel is also harshly ‘judged’ by her dead husband’s father when he and his wife come to see her at Mrs Crawley’s house. 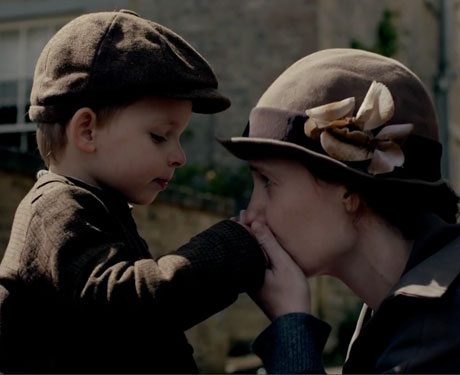 After weighing up all the pros and cons she finally decides to give up her little son who leaves with his grandparents to hopefully live a better life far away from the world of prostitution his mother has turned to in order to just survive.

Mrs Hughes and Mrs Crawley have joined together to try to help her back from ‘the road to ruin’ but they are both at a loss what they can do to help her regain her respectability. They are also feeling dreadful that she is so distraught after witnessing her waving her dear little son goodbye. 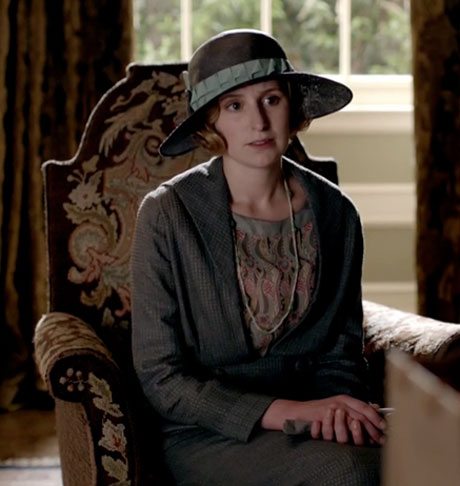 After her major disappointment at the altar last week poor Edith is trying to face up to the consequences of her choices and understand why she deserved to be treated in such an awful way by a man she loved and who professed to love her. 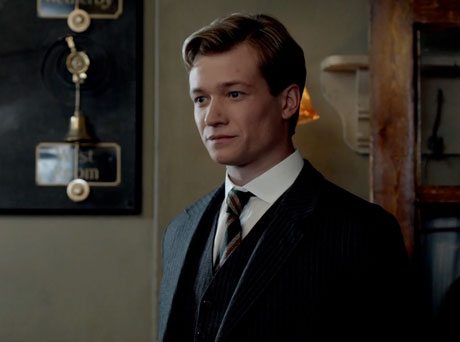 She’s feeling entirely lost with nothing to do during the day, so seeks advice from her grandmother the Dowager Duchess Violet. She’s not in a kind mood either and reminds her she is an intelligent woman and tells her to ‘stop whining and find something to do’.

A search for new staff begins and a very handsome footman turns up for an interview sending all the maids into a flat spin and its not hard to know why. 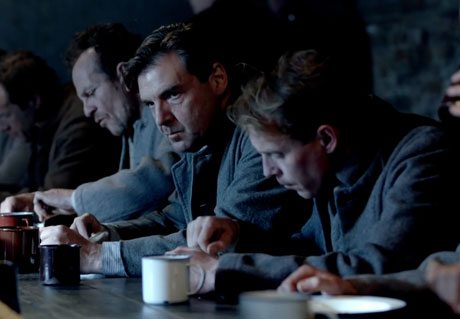 Anna is desperately missing her Bates, who is also facing up to the consequences from the things that have happened in his life so far. It’s sure tough in prison trying to stay one step ahead of the game. He hasn’t heard from his Anna either, no letters have been delivered in or out.

He finds out eventually they are being withheld, although he’s not sure why but at least he knows. Anna on the other hand is left entirely in the dark, feeling lost and abandoned. 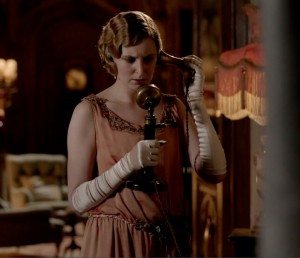 What is the meaning of the mysterious phone call Edith takes from Sybil just before she goes into the grand dinner they are holding at Downton for the Archbishop of York?

She expresses her concern to her mother and Mary, who are all puzzled as well. And, who is that in the dark running along the street in the rain trying to avoid a policeman passing by on a bicycyle? 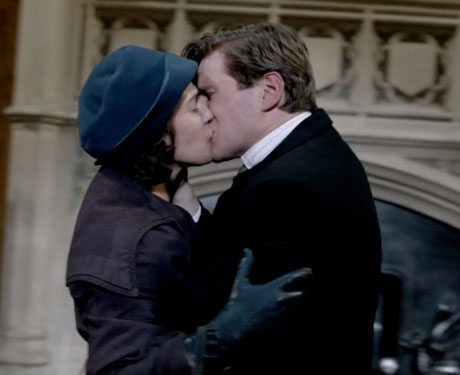 Goodness, it turns out to be Tom Branson, Lady Sybil’s other half. He seems has got himself into a very bad ‘situation’ back in Ireland. Attacks against the Anglo-Irish are happening and the house of an aristocratic family well known to the Granthams has been set on fire. Instead of feeling pleased as he always imagined he wood Tom finds himself distraught at seeing the family all turned out of their home. Things have changed now he has the support of a good one himself.

He’s on the run, protesting that he took no part it, but he left Sybil behind to fend for herself while he fled and Lord Grantham is very angry, especially when he finds that Tom attended the meetings that led up to the horrific event.

Despite his being furious, he’s reminded that Tom is after all family so the Earl heads off to London to visit his friends in the government to see what he can do.

Tormented, ashamed and alone the handsome Tom is facing up to what happens when people act on their ‘beliefs’ in a harsh and unjustified manner.

It’s a ‘harsh’ world, one he used to know only too well, and the one he knows all the Grantham’s remain detached and protected from by a cocoon of wealth and privilege. When the lovely Sybil finally arrives at Downton safe and sound we are left in no doubt how much she and Tom love each other. She also affirms his position with her family at a meting they all hold and that they had carefully made arrangements for her to travel safely, just in case anything happened to him. As an Earl’s daughter she is intelligent and used to instructing others what to do so her journey has been without incident. The Earl arrives back from London to let Tom know that he is exiled from his home country and that while ever he remains in England he will be safe from prosecution, but if he puts one foot back in Ireland it will mean gaol.

If Bates were about he would let Tom know first hand there are no perks or priviliges of rank in prison.  Sybil in the meantime is simply seeking a place of peace and safety  to have her baby and Downton can offer them both. Meanwhile, Carson has been forced to choose between two candidates for the position of footman. One was steady and not much else, the other is the one all the maids have voted for.

Mary encourages Carson to give the handsome one a chance and ‘cheer them all up a bit’. Nothing like a bit of eye candy to brighten everyone’s day.

Downstairs the new footman is kept busy finding his way with the staff . Upstairs in the dining room Edith reveals that she has written a letter to a newspaper, much to the Dowager Duchess’s dismay, ‘no lady writes to a newspaper’.

When Lady Cora agrees with the Dowager Duchess and says to Edith ‘I think your grandmother is right’, she wittingly asks ‘will someone write that down’?

The Earl doesn’t believe it will be published anyway, so Edith is howled down by a vote of no confidence. And there she was thinking someone might be on her side. The new footman however does create a stir, the Dowager noting he’s so handsome that he ‘looks like a footman in a musical revue’. Carson notes that ‘hard work and diligence weigh more than beauty in the real world’.

Bates is glad to find a little beauty coming back into his life as he goes from being out of favour into being in favour again and his letters from Anna are delivered.

He’s as overjoyed, as she is to receive hers from him the next day.

Carson finds smoke coming from Mrs Hughes room and rushes to her aid with the fire bucket. But lo and behold there she is making ‘toast’ on her new fangled machine the toaster, and has burned some while trying to get the hang of it, so a little bit of mirth on the horizon.

At breakfast a new day is dawning and the sun is coming out for Edith as her letter appears in the paper. Her father reads it out and is mortified that it has been published. It’s in condemnation of the government wanting to take woman back to the days of pre-war England, rather than give them the vote and move forward into the new age.

Matthew and Tom both come down on Edith’s side, allowing her for once to feel good about herself.  Who knows, she may be invited to write her own newspaper column next. Matthew is looking all at sea as he goes to talk to the Dowager Duchess about his fears that the Downton Abbey estate is being mismanaged. She is clearly horrified at such a thought.

He wants to know what he can do without putting people’s noses out of joint. Oh dear, she says, she fears a great many noses will be out of joint if he acts, which he must do as his conscience dictates.

Looks like many more fires to put out ahead and a lot more consequences to deal with.

During the 18th century in London actor David Garrick was the man everyone wanted to see, as audiences flocked to see Garrick’s Hamlet at the theatre