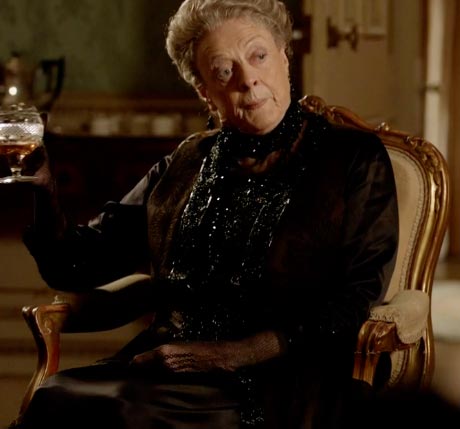 ‘Well….that is an easy caveat to accept’ says Dowager Countess Violet (aka the simply marvellous Maggie Smith) staunchly in a conversation with her son Robert, Lord Grantham and his wife Lady Cora in the Drawing Room of Downton Abbey, ‘Because I am Never Wrong’.

And therein lies the crux of the tale told in Season 3 of Downton Abbey. Episode 7 of Julian Fellowes grand soap opera, which our British Correspondent is keeping us abreast of as all the drama unfolds. It is all about finding solutions to contemporary challenges and so if you don’t want your impressions spoiled then please don’t read on.

Maggie Smith is simply revelling in her role as the Dowager Countess, a geriatric lady of great consequence, whose mind is still as sharp as her wonderful wit, which she employs constantly to our amusement and the chagrin of those surrounding her. What a part to play, not only is she still a fashion plate for her age, but also in this episode she’s become a champion for Tom Branson the Irish Catholic ex-chauffer who married her grandaughter Lady Sybil and produced her first grandchild.

Finally Lord and Lady Cora have to face up to what will happen to their grandaughter when Tom announces that because of his circumstances he will have to go and live with his not too savoury brother above a ‘garage’ where he is the mechanic. It’s the Dowager Countess who comes up with the ingenious solution, one that they have all been too blind to see. 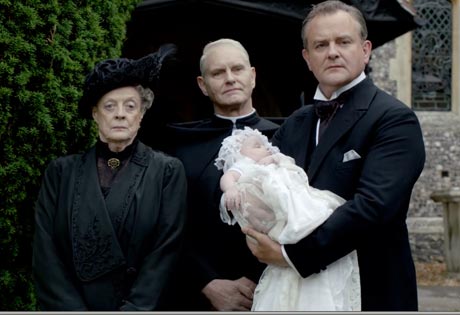 Matthew Crawley has proved his passion and commitment to the changes that must take place at Downton Abbey if the estate is to survive into the future. In this what he has to say results in the dramatic resignation and exit of Jarvis, the previous estate manager, who has been slighted by all the ‘accusations’ about his skills, or lack thereof and management prowess, despite 40 years at the helm.

As the Dowager points out, Tom could easily replace Jarvis, after all his father was a sheep farmer ! Lord Grantham as we have come to expect now, rather than encouraging or mentoring the next generation, responds in his usual negative manner to which the Dowager retorts,’ which means he has more practical experience than Jarvis ever had … Robert, you cannot possibly want your grandaughter to grow up in a garage with that drunken gorilla’ referring to Tom Branson’s beastly brother. He has created quite a stir since his arrival upsetting all the servants downstairs before going upstairs to create further havoc there. There is no retort to this remark and the Lord is suitably silenced.

In this episode baby Sybil Branson is also finally christened into the Roman Catholic faith, with both Dowager Countess Violet and her son Lord Robert Grantham having to bear up to it all and have their photograph taken with the Catholic Priest who does the deed. What is the Downton Abbey world coming to? 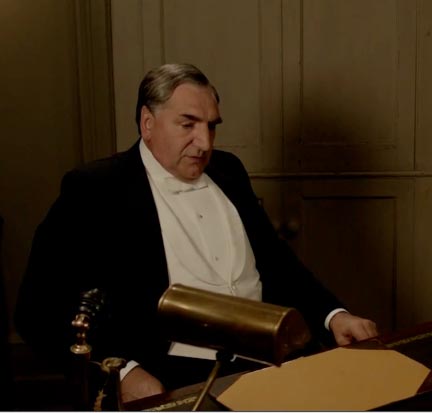 Downstairs things are certainly hotting up where Carson is in a deep and serious conversation with Thomas, who has been caught out by Alfred the Footman in the bedroom of the handsome footman James, bending down and kissing him while he is asleep. James awakened erupts in horror.

The tension in the house the day after the night before is palatable as the three protagonists involved Alfred, James and Thomas all struggle to be civil with one another.

The sequence of events that led up to this ‘happening of the homosexual kind’ has been building up under the aegis of Mrs O’Brien. She has had it in for Thomas Barrow for a long time now. She’s been feeding him tales about how James secretly admires him.

Will she get her revenge at last, and see Thomas not only charged with a ‘criminal act’ but dismissed without a reference? At this time all of these prospects were on the cards if a man didn’t square up and act like every other man. 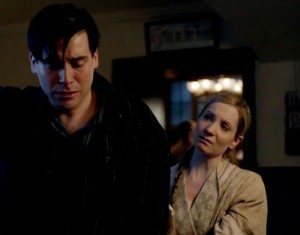 They were very hard times for human sexual behaviour, after all the literary hero of the previous age (Oscar Fingal O’Flahertie Wills Wilde (1854-1900) had ended up in Reading Gaol for daring to be who he was and for embracing his own humanity.

The complexity of human behaviour is certainly a puzzle for Mr Carson.

He struggles daily both with his natural compassion and caring for those who work under his charge and the general moral and social outrage that is levied at any man seeking to be ‘different’. 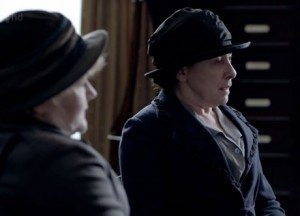 He’s a fair man who is also struggling with the thought that two men should love each other at all, despite his own continual unimpeachable adoration for Lord Grantham, his Lord and Master.

He and Mrs Hughes throughout this series have formed a great bond. She often gives off an air that she knows more about Carson than he thinks, or may have admitted to himself.

Her wonderful line in this is delivered after arriving in his pantry when Thomas has left.

Carson becomes all philosophical about human nature with her and she responds ‘Why didn’t the poets come to you Mr Carson, they would have saved themselves a lot of time and trouble’ and he’s completely puzzled by her comment and meaning. The days since the war are ticking by and the changes that this new generation are inflicting are starting to dig deep.

The ageing Lord Grantham’s children are now taking charge of their own destiny and many of the older people are suddenly being thrown into a position of feeling entirely out of their depth with so called ‘modern thinking’.

The episode opens with Anna suspending reality by arriving in the family Rolls Royce to pick up Bates from prison, as you do.

He steps out the gate looking a picture of sartorial elegance in this suit, coat and bowler hat to finally spend time with the wife who has fought for so long and so hard to have him released.

He’s given a hero’s welcome by all his downstairs colleagues, except perhaps for Thomas who is now likely to lose his position of valet to the Lord.

The job was one that he had coveted for so long and obtained when Bates was sent down for a crime he did not carry out.

The Lord is delighted to see Bates and tells him to rest up for a while, giving him time to sort out what is to be done about Thomas and to arrange a cottage on the estate for Bates and Anna so that they can finally live together as ‘husband and wife’. Upstairs in the Breakfast Room Edith is talking about another letter she has received from London from an Editor about writing for his paper.

Lord Robert is once again furious and makes the fatal mistake parents often make, forbidding her to go.

So she announces her intention to go up to London and meet with the Editor as soon as possible.

She is wanting to embrace her new life and is ready and eager to do so. Matthew backs her stand making Lord Robert bristle with indignation. 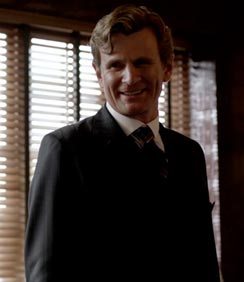 The trip to London to meet and talk to the Editor turns out to be very different than what she imagined, and they have an immediate connection.

He invites her to lunch and she finds herself, despite all the warnings, agreeing to become a journalist, which would have been a scandalous occupation for woman of that day let alone one from her background to consider and also happily accept.

He’s very pleased she is not married he announces at lunch the next day, where they both indulge in animated conversation. You gain the distinct impression there is much more to the Editor than immediately meets the eye. 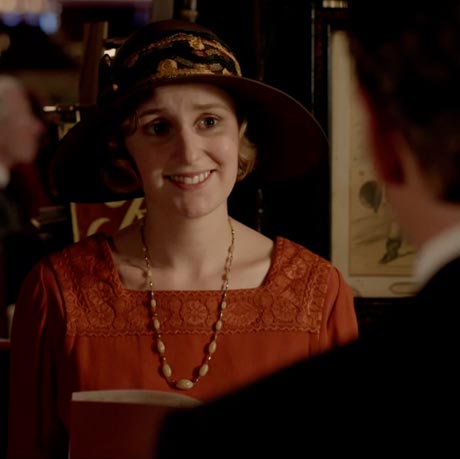 It seems it may turn out to be a blessing in disguise that Edith was ‘abandoned at the altar’ after all, which she straight up tells him all about over lunch.

Edith’s frankness and willingness to ‘say it how it is’, not putting a spin on it or embellishing the truth in any way is an aspect of her growing character endearing to all.

She wears a great ‘red outfit’ to meet him for lunch pointing to the fact that she’s going to probably be one power lady to be reckoned with in the very near future.

Edith’s story too now has the potential to open up the Downton Abbey sheltered world to many more influences from outside and we are all left probably feeling about as excited as she is by the prospect.

All in all, Episode 7 is probably a landmark episode one in which Fellowes can sow the seeds that will see the next three episodes build a terrific climax towards the seasons end.

Lord and Lady Grantham have finally reconciled after all the trauma of their daughter Sybil’s death and she is gently trying to lead him into accepting that his role will mean that he should start taking a back seat and let Matthew and Tom drive the estate forward.

It remains to be seen if there will be another landmark Christmas Special this year, but it would be great if there was, sort of establishing a ‘Downton Abbey’ tradition.

In this episode Lady Crawley has also been busy helping Ethel, but there is now a plot afoot supported by Lady Cora and the Dowager Countess to find Ethel another position and let her move out of the district to find her destiny and happiness somewhere else.

They accuse Lady Crawley of keeping Ethel in Downton village as a symbol of her own identity and her need to be seen as someone who supports the underdog.

She doesn’t appear to be very happy with them at the funeral, where she chooses smart French Blue to wear. The family ladies have emerged from their ‘black’ into different shades of lilac, the next colour phase of the grieving process and the Dowager is in black, as she would be forever mourning the loss of both her husband and grandaughter, which was also completely appropriate for a lady in her position at the time.

It’s hard not to wish that the weeks would roll by faster.