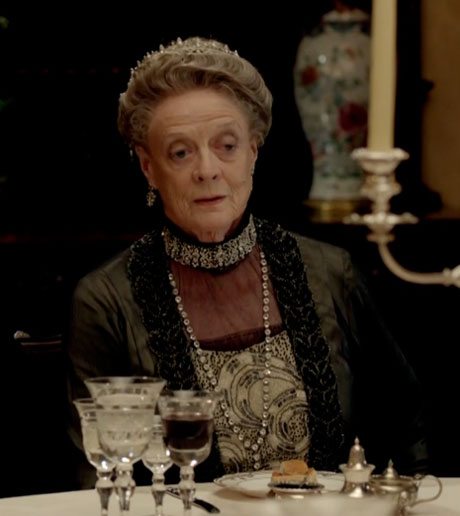 ‘No family is ever what it seems from the outside’ observes the Dowager Duchess Violet.

Well, there we were all getting excited at the prospect of another wedding at Downton Abbey and then the sun that we thought had come out went in behind the clouds again and plunged us into darkness and sorrow. It will teach us all that we must ration our excitement, much like the Dowager Duchess Violet,  because too much can be fatal. Our British correspondent was blubbering so loudly following Episode 3 of Downton Abbey Series 3, it took a while to calm down and tell us the whole story, so please don’t read any more if you like surprises from your favourite weekly dose of drama.

For those in the know didn’t our Edith look wonderful on what she had hoped was her wedding day? So different to Mary, a simpler wedding – no Archbishop. Just the village Rector Mr Travis, who had christened all the girls as babies, such a lovely thought. And the local photographer recording the event of the three sisters together and happy again as they once were, even if only momentarily for posterity. Lady Grantham looked delicious in that new and fashionable outfit, despite these being such austere times. Then there were all those flowers that Anna always arranges so brilliantly. Ravishing is not enough to say to do them justice. And the wedding cake, a triumph of both baking and style. There they all are at the start, the downstairs servants getting the big house ready once again for a bride and a wedding, such excitement as they roll up the great William Morris carpet, which is just too divine. And the food, the sumptuous feast that is to follow, Lobster, duck, oysters, asparagus and champagne, Mrs Patmore has done them all proud.

Edith can hardly contain her excitement as she observes all that is happening. At last an event just for her and best of all, her sisters and mother have gathered to support her on such a happy day. 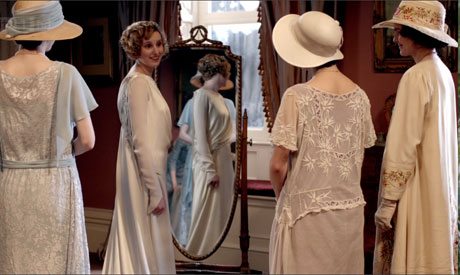 There is Lord Grantham looking just as handsome as ever, leading his last daughter down the aisle to marry the man that even the day before, he had admonished yet again for his ungentlemanly behaviour and marrying his daughter, a girl young enough to be his daughter. Father’s protecting their daughters, always such a conundrum if they don’t find a chap they approve of.

So how could poor Sir Anthony with his gammy arm, gentle and sensitive manner cope with the pressure and stress of it all. Not to mention Edith’s eager face and all that happiness abounding and the idea that he might just be able to kick start his life again. Heaven forbid. How could he expect to know such happiness too?

Finally, as Edith arrives to stand by his side it just all becomes far too much for the poor chap to bear. So what does he do? Well, he lives up to what will be his new reputation as a jerk and he jilts her unceremoniously at the altar, good manners abandoned.

It was simply horrid, a shock for all, especially poor Edith who now faces the most awful fate of all. Being a ‘spinster’. 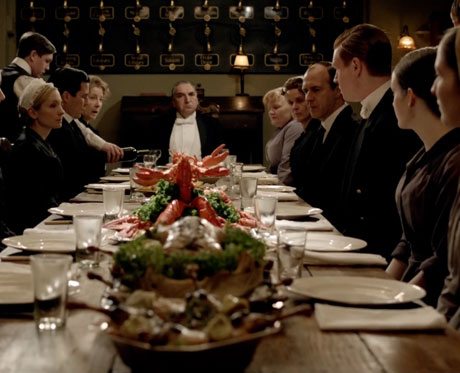 Downton Abbey Series 3 has quickly settled in, is full of intrigue and setting a cracking pace. The giddying pace of events upstairs and downstairs means that we all have to keep our wits about us if we want to keep up with all that’s happening.

Thomas is up to his old tricks again, this time setting up poor old Moseley who now works up at the big house having left Lady Crawley in the lurch. He just looks confused most of the time, because he’s such a simple soul, one who is used to people always being ‘nice’ and he doesn’t really understand about malicious, devious, dastardly and not so nice behaviour, especially from those he regards as his colleagues.

Intrigue and undercurrents are rife downstairs as the servants all sit down to their after the wedding feast, the rest of the food being sent to feed the village poor.

Lady Crawley is busy being active doing ‘good works’ helping girls that she hopes will be grateful, many of whom are only snearing behind her back. How can she help the former maid who has fallen on hard times? She has to find her first, with the help of Mrs Hughes. 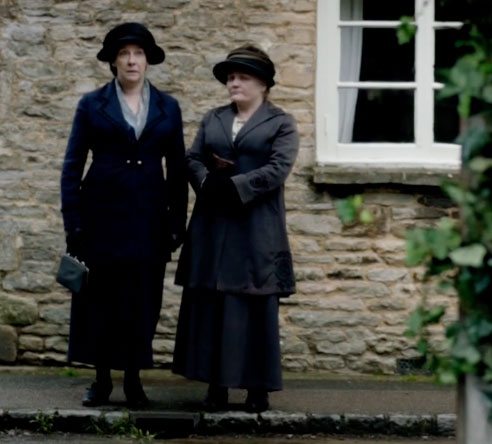 Mary is causing Matthew many more moments of heartache, as she disappoints him by not rising to the occasion and looking forward to leaving Downton Abbey behind. She comes out fighting for both her home and her heritage.

She wants to be in ‘possession of all the facts’ and turns detective so that she can find out the ‘real’ truth about why Lavinia’s uncle would want to leave Matthew money, especially after he knew he had been a cad to his favourite niece.

Will she do it, will she find out who delivered the letter the dying Lavinia wrote setting poor Matthew free.

Then there is a really lovely vignette of Mrs Hughes and Mrs Patmore, standing side by side affectionately on the curb together as Mrs H faces head on the news about what her fate is to be, death or life. 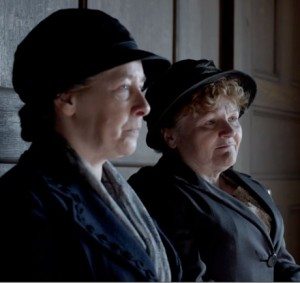 They make an unlikely pair, the cook and the housekeeper, but prove to us all that when the chips are down and things are not going well that often those we have felt animosity for in the past can end up being like an old cardigan or shoe and a comfortable fit.

Through all that they have been together they are now familiar and very dear friends, united as their advancing years dawn. Mrs H learns just how much the family highly regard her and all she’s done in her life with them, when in spite of her illness, they tell  her she that while ever they are there at Downton she will always have a place to be. 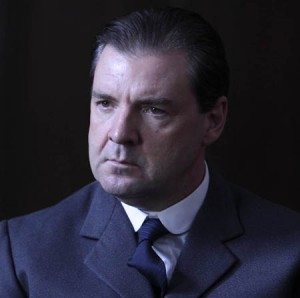 How gratifying, how special because it is one of the greatest fears for those who despite working hard and earning a wage, are never able to ‘save’ and to put away enough money for their old age. Where will they go, who will look after them when they cannot look after themselves?

Carson is on the trail too, having overhead a conversation he should not have been listening too. He’s overwhelmed by the thought he might lose Mrs H, whom he so relies on and so he quietly begins to do everything he can to lighten her load.

Wait just a minute, have they all forgotten ‘Bates’, the man who became the hero of the first two series, the one we all thought was the most romantic man on the planet? He’s now facing hell itself in prison, as some of the inmates and guards set out to ‘get him’ and make sure he never gets out by setting him up. He’s just managing to keep one step ahead of the game so far.

His dutiful wife Anna meanwhile however, is endeavouring to get to the truth by talking to those who surrounded his ex wife on the day she died. Will it turn out alright for her in the end? Is he who she thinks he is – really? 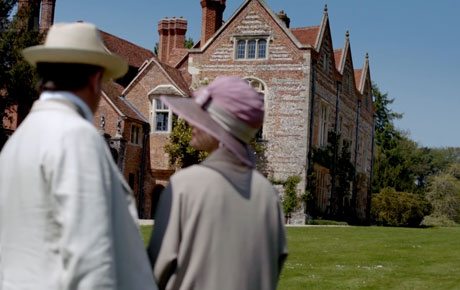 It’s a puzzlement, as Julian Fellowes the writer and creator of our favourite weekly dose of suspending reality keeps us all in suspense.

The family is collectively facing moving to ‘Downton Place’ a house Lord Grantham owns and is tenanted not too far away.

So they all go on a picnic the day before Edith’s wedding all dressed up and in their nines traveling in a motorcade where, in its lovely grounds, they sit down and have lunch with crystal and china while they look, observe it and talk about how they will cope with downsizing to only having eight servants and hardly any space, which Mary declares ‘will be torture for all of us’.

We are all left bewildered, looking at a house many of us would die to own, built of brick but only dressed with stone, which is significant, real aristocrats always ‘built with stone’. It said a lot about solidity and character.

This house has great character, with its deep sloping gabled roof, a house that has evolved historically like the family judging by those great Tudor style chimneystacks on some parts of the roof and what about those lovely large windows. Glazing is expensive.

We all want to move in now! 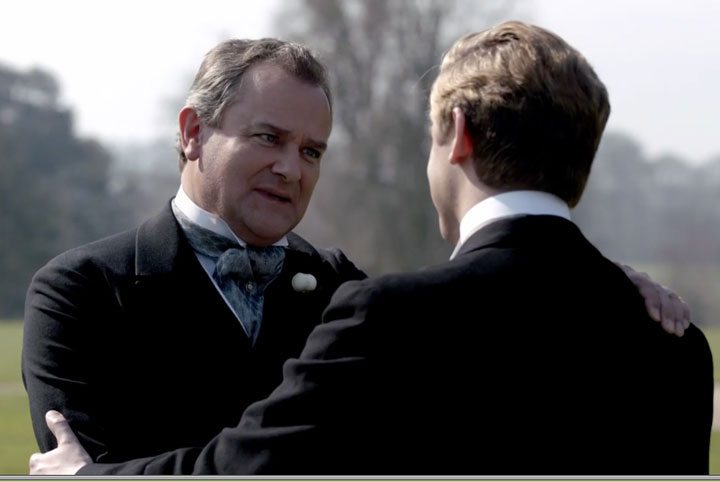 Towards the end our Mary also wins out, and proves to Matthew that he won’t be, or be seen to be noble if he gives all that money he is inheriting away.

So instead he accepts it and ‘invests’ it with his favourite father-in-law in the estate, which they will now run together. Boys bonding together is always such a happy sight.

For now it seems the family is saved and Matthew has to admit that he, along with everyone else did not really want to leave Downton Abbey. 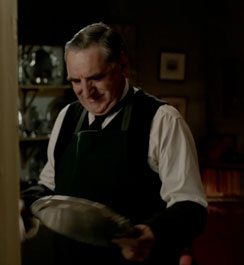 At the end Carson is displaying his good manners by not letting Mrs Hughes know that he knows she is alright. He doesn’t know that she and Mrs Patmore colluded so he would find out accidently. There he is downstairs comfortingly polishing the silver, turning everything that is tarnished into being bright again. The good news about Mrs Hughes means that the change he has so feared has been allayed. Well so we all hope, because next week it looks like it will be Sybil’s turn to stave off disaster.

It just goes to show that whenever we believe that something is coming right in the end that we must always remain just a little sceptical and, instead of being too optimistic, ration our excitement.

English painter Thomas Gainsborough (1727–1788) endowed history with lyric faces, knowing precisely the style of elegance his sitters required. His technique was vivid, spontaneous and his use of colour passionate. He always talked of colour in musical terms; harmonies, rhythms and so forth. His beautiful likeness of the Hon Mrs…