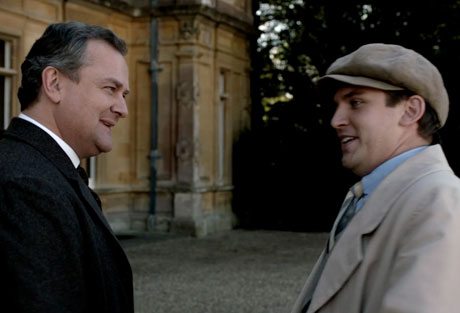 How wonderful the labrador is back, wagging its tail happily as it walks beside its master Robert, Lord Grantham as they approach Downton Abbey, that marvellous old Victorian pile set in the English countryside. Episode 2 of Series 3 reveals that Matthew’s eyes have been opened in more ways than one following his marriage to Mary in Downton village last week. Well that’s what our British correspondent reports, after finally recovering from the wedding event, which dominated episode one of everyone’s favourite historical grand soap opera of the modern kind. So please, don’t read any further if you want to salivate yourself over the joys of Season Three as it progresses.

Its talented writer Julian Fellowes, seems once again to have re-established the pace and momentum he so successfully employed in Series One. Episode 2 starts with Matthew and Mary arriving home in a flash new sports car with the top down, very racy. Being married has many advantages, because at last they can share and wake up in the same bed, rather than for the sake of the servants, Matthew creeping away in the early hours to be found in the morning in his ‘dressing room’. When they come downstairs it is to find that Cora’s mother from America, ‘she who would prefer not to be obeyed’ Martha Levinson is still in residence. Lord Grantham and his mother Violet spend much of the episode trying to work out how to tactfully ask her, or suggest to her that she should go home. Her presence must be causing at least some of their new money strains, although the Downton women certainly aren’t much help when it comes to minding the budget. ‘Nothing succeeds like excess’ says Dowager Violet to Mary quoting a contemporary of her time Irish writer and poet ‘Oscar Wilde’, as she views the fabulous table Mary has had set up for the all White Tie dinner party she is giving. She is endeavouring to ‘save Downton’ from being sold by appealing to her American Grandmother Martha, whom we all know based on her clothes and jewels is loaded, to save it. ‘Perhaps it would be a better choice to adapt Robert, rather than to face extinction’ observes Martha to Robert, Lord Grantham, as she tells him privately that while she is aware of his plight she is very sorry that she cannot rescue him from the financial wilderness he now finds himself in. Adapting seems something they all have to do whether upstairs or down, as the kitchen oven gives out as the guests are arriving for Mary’s very posh white tie entertainment. But its Martha to the rescue. She rescues them all from an immediate disaster by taking charge of the servants. She asks them to gather up all their ‘cold cuts’ and arranges an impromptu picnic indoors for their guests, Downton style. The guests are not shocked at all, but excited by such a prospect, anything to spare them from the predictability of the formal dinner parties of their day.  It turns out to be a great success, despite Lord Grantham and Matthew his heir turning up in ‘black’ not ‘white’ tie after both suffer wardrobe malfunctions at the hands of their valets.

What will happen to all those we have grown so fond of upstairs and down as the loss of Downton Abbey and the reality that moving to a new establishment is definitely on the cards. What a prospect. And what about us viewers, how will we all cope if they move out of that fabulous pile and ‘downsize’. ‘I need a drink’ says the Dowager Duchess, thinking that her son Lord Robert is a waiter in his ‘black tie’. However she soon has more to contend with as Martha bursts into song, singing the 1910 number that later the first world war made popular. “Let Me Call you Sweetheart”,  as she kick starts a singalong.

This is a first for Downton Abbey and its inhabitants upstairs and down based on all the shocked looks on their faces. Just wonderful, although the look on Dowager Duchess Violet’s face perhaps best says it all.

There is so much going on at Downton, much unrest below stairs and huge changes upstairs as well. Our favourite plotting Valet Thomas faces possible extinction when all Lord Grantham’s dinner shirts are ‘lost’. But are they?

He’s been so nasty to Sarah O’Brien’s nephew, the dishy Thomas who has joined the staff, perhaps Sarah has had a hand in it?

Daisy doesn’t look too pleased either to see Thomas kissing Martha’s maid. Those ‘fast’ American girls are a bit of a puzzle for her, while he looks nothing but pleased. 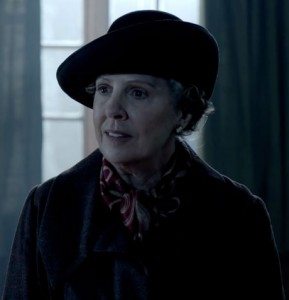 Anna is visiting Bates in prison again, but things are not looking so rosy there either. His new cell mate poses a threat or does he?

Has Bates got his measure and will Anna’s faith in him be shaken soon?

But wait, who is that girl that Lady Mary Crawley recognizes at the Young Women’s Shelter where she is investing her time to help girls and women in distress to have a better life. Could she be Lord Granthan’s former mistress? And what is the secret she seems to be hiding? What, if any impact will that have at Downton? 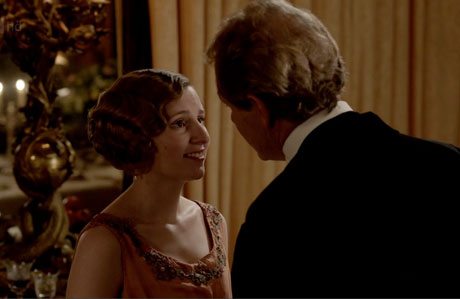 And how about Mrs Hughes, she was very quiet last week you will remember I noted her lack of input, well it appears that she just may have a terminal illness. She and Mrs Patmore share some special moments together here proving that camaraderie does exist downstairs.

Throughout all that’s happening Dame Violet and Lord Grantham are busy plotting together in order to secure Edith’s happiness by asking the lovely Sir Anthony Strallan, whose just as fond of Edith as she is of him, to give up his daughter. Instead they cause her a great deal of misery and she turns to Martha for help, who while empathizing also understands Lord Grantham’s hesitancy for his daughter to marry someone 25 years older than she is, despite the fact that they have so much in common and seem so eminently suited.

‘Every young man I grew up with is dead’… says Edith woefully, the war has certainly taken its toll on everyone. So Martha questions his motifs. Age is merely a number, you feel like shouting out. But good old Edith, she is determined to live her life under her own terms and finally secures her own happiness. In Episode 3 it seems we will have yet another village wedding to attend. Hoorah !

‘Three daughters married’, Lord Grantham should be feeling very pleased with himself.

I for one hope that Martha lingers longer, she’s such a wonderful addition to the cast of this marvellous series. 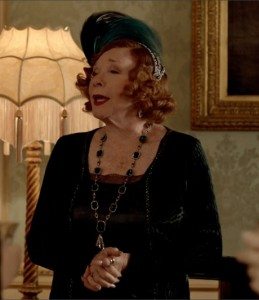 She’s very avante garde, and a perfect foil for all that English stuffiness that was a hallmark of the Edwardian age. But this is 1920 and times are moving fast and a’changing as she warns them all. Adapting to change is the name of the game if it is to be the survival of the fittest.

Mrs Hughes and Carson both reminisce following the successful end to Mary’s evening, despite all the dramas that have occurred downstairs. He’s worried that they are staring into the ‘chaos of Gommorrah’.

Perhaps everyone is tired of ‘style and show’ she observes and Carson re-iterates the words of that distinguished man of letters in English history, Samuel Johnson. He is perhaps best remembered for compiling the first definitive English dictionary, that no doubt Fellowes borrows some of the fabulous words he uses in this from. He observes that…

War Horse is a new movie from DreamWorks Studios, a great journey, a timeless story of loyalty, courage, love and hope whose impact will be felt for a long time