“There can be too much truth in any relationship”, says the Dowager Duchess Violet with a twinkle in her eye, as she addresses the issues to hand that will ultimately affect all the protagonists who live so comfortably in Downton Abbey, both upstairs and downstairs.

The year is 1922 and actor Maggie Smith is having the time of her life playing the Dowager Duchess, who is one fabulous character.

With great zeal the Dowager is trying to help her beloved granddaughter Mary reinvent her and carve out a new life now she has lost her beloved husband.

The start of Season 4 as we would expect, based on what happened at the end of the final episode of Season 3, is indeed sobering.

The dreadful car crash that came as a big shock to devoted viewers and brought to a tragic end everyone’s favourite son Matthew Crawley, who was played so ably by Britain’s new heartthrob Dan Stevens is now six months past. He exited this much loved and in demand series on such a very sad note and some would say, far too soon. 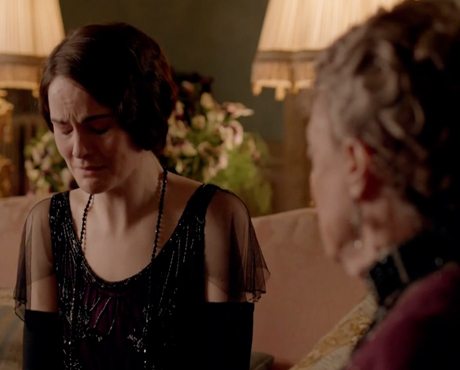 You should not read any further if you don’t want to know what happens afterwards.

Time is now passing and Lady Mary is still struggling to cope with losing Matthew after them having such a little time together.

She had just delivered their first child and son tiny George, and they had both been so happy when he left the hospital.

As the series opens little George, now wearing a smile and a cute suit just maybe being looked after by the nanny from hell.

Who is this woman in charge of both babies in the nursery, including Mary’s brother in law Tom’s beautiful daughter.

This little lady with all the curls had been born to Mary’s sister Sybil, who also died in tragic circumstances earlier in the series so these two little orphans need double loving but are they getting it?

Goodness. How much more can happen to this family or their assorted faithful retainers? Well it is our curiosity that has us all tuning in to find out. 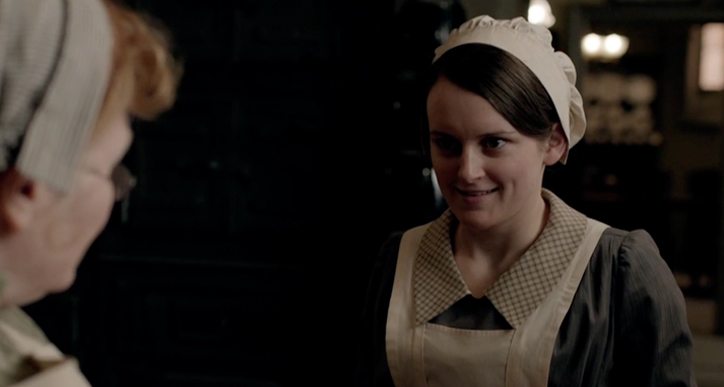 Gossip is rife below stairs and Downton’s family has now become like an extension of our own.

It’s the family so many are striving to emulate; successful, living in a wonderful house wearing fabulous clothes and having a great view of a very picturesque countryside and being looked after by a coterie of devoted people who wait on your every wish.

However it is after World War II and everywhere are the signs that times are-a-changing.

What is that new fangled machine Mrs Patmore’s right hand Daisy is endeavouring to master? Is it true? Can it really whip the white of eggs in only a minute instead of Daisy having to stand for 20 – 30 minus beating them by hand in a copper bowl? Be careful warns Mrs Patmore, if you master this contraption you may just put yourself and others here out of their jobs. And she is right to be cautious.

It is after all not so long since that dreadful first war in Europe when valets and their lords found themselves in the trenches together with bullets aimed at both their hearts. Indeed Daisy needs to be careful, just as everyone else in the household will need to be.

Mary is finally awakening from her lethargy and extended period of mourning, to take on the role Matthew it seems has bequeathed to her, guiding Downton into the 20th century without sacrificing the house or the land.

But what does that mean for the people who live there?

Mary’s father the Earl is sure that selling off land is the only way for them all to cope and keep paying the bills, as well as the fearful and immoral death taxes, which crippled many estates at this time and brought them crashing down in the first 50 years of the 20th century putting thousands of people out of work and destroying a whole way of life. 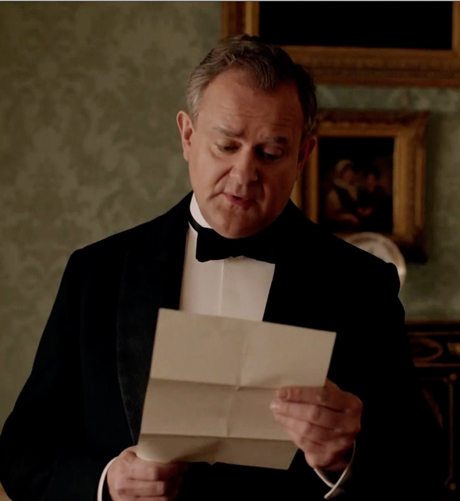 Mary’s grandmother, the Dowager Violet is not very pleased with her son the Earl and his endeavouring to keep Matthew’s wishes to himself.

It seems Matthew left a testimonial he recorded and witnessed, which is suddenly found tucked away in a book in his office that has been delivered addressed to Mary in a box. Imagine how we would feel at Mary’s age as her father intercepts the parcel and goes through it for himself.

The Dowager his mother is absolutely furious. Duchess Violet has become a women’s liberation convert and is she is very keen to see her granddaughter Mary take her rightful place in the world.

She wants her to have her own say in what is to happen as the legitimate ½ owner of the estate.

She insists on the Earl sharing the news and letting Mary decide for herself what it is she would want to do. But is it legal?

Now the letter with Matthew’s wishes has come to light what does it meet for all those above and below stairs? Her brother in law Tom however is very pleased.

He knows Lady Mary championed he and Matthew’s ideas about how to modernize the estate and he wants her involved.

Mary likes having an ally in the house in Tom.

When she finds out she is a shareholder she finally begins to awaken from her mourning lethargy and starts to get back her old fighting spirit, the one that has endeared her character to millions worldwide.

Meanwhile those who live below stairs are having their fair share of problems as a whole new set of challenges present themselves, especially with the re-entry of the former housemaid, who had been sacked after being found in a compromising position with the former chauffeur Tom, who was now moving in upstairs circles.

She’s returned as a ladies maid to assist the Duchess, with O’Brien leaving in the dead of night to seek a new life with Rose’s mother, who has stolen her away from Downton Abbey. Lady Rose is the cousin who came to live with those up above the stairs at the end of last season.

In Season 4 is she is proving herself to be a bridge between the two parties, or is she going to be the meddler? Will she be the one who will break down the social and cultural barriers that existed between those who live up or down stairs at this time and bring to an end Downton Abbey as we know it?

What will happen to the handsome young man she met in the village hall dance, where she pretended to be a maid from Downton.

Especially when he comes there to the back door trying to find her?

What is Rose doing playing with so many other people’s lives?

Moseley is in a bad place too, having been fired from Downton Abbey’s staff by Carson and having to move back home to live with his father, mortifying for a man of his age.

Why has the new ladies maid leveled all her malice towards Anna, the kindest and gentlest much-loved lady in the house? She and Bates are so happy why would anyone want to give them grief after all they have been through?

Edith meanwhile is having many trips up and down to London to meet with her newspaper magnate. She is dressing in daring avant garde style, acting in a very daring way – kissing him in public and wanting to stay the night. For the moment her good sense is prevailing, but how long can she hold out.?

Down in the Village Matthew Crawley’s mother is also endeavouring to cope. She is helping the very wise Mrs Hughes rescue an old friend and former partner of Mr Carson whose fallen on hard times

She has such a good heart, so why is the Nanny at Downton keeping her from seeing baby George when she visits? It’s all happening again at Downton Abbey, and everyone will once again become hooked on Julian Fellowes masterful series of life lived stylishly in an English Country House gets underway.

The family and their faithful retainers are all fast moving into the modernity of the ‘Deco’ age, which is far different from the laid back elegance of the Edwardian age where we started this journey. There is no doubt hearts will be broken, fortunes won and lost and true love and family ties will be sorely tested to all their limits.