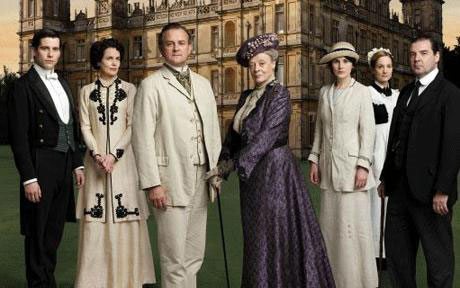 Our London correspondent gave us extensive news in January 2011 about the exciting television series Downton Abbey, which captivated the hearts of English viewers for seven Sunday evenings from September to November in the UK during 2010. It was the most expensive British TV show ever produced attaining some 10 million viewers. It is a great upstairs and downstairs story about life in an English Country House prior to World War I. It is also about the dawn of a new age. Downton Abbey came second to the popular Doctor Who in the television drama category in 2010. Unheard of for a period drama. Channel 7 aired it in Australia in 2011 to huge audiences and much acclaim. It was also transmitted on PBS in the US beginning January 2011. 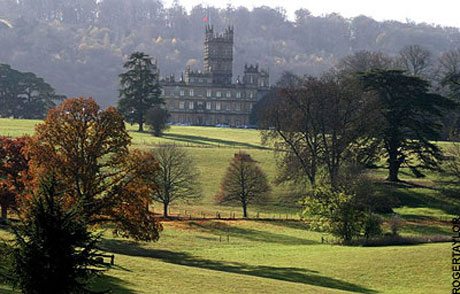 The first seven episodes were written and produced by renowned English actor, novelist, film director and award winning screen writer Julian Fellowes (Gosford Park) who knows a thing or two about the class structure of England both yesterday and today as a member of the House of Lords from 2011. Along with the evolution of the country house style of living in England comes the story of the people who built them; of those connected through marriage or financial interests or employment. Farmers, game keepers, gardeners, grooms, coachmen, upstairs and downstairs maids, housekeepers, cooks and so on, they were all part of the great country house community all of whom were meant to care for and support each other.

The series was filmed on location in the lavish interiors of Highclere Castle, a monumental Victorian house built in 1842 from a design by Sir Charles Barry, the architect responsible for the Houses of Parliament at London. There are still 850 ‘great country houses’ remaining throughout England, Wales, Scotland and Northern Ireland some of whom throw open their doors for the summer in a time honoured tradition of hospitality.

Today their owners are guardians if you like, of a legacy not only in the architectural sense, but in that of the contents all of which reflect societies attitudes and changing ideals and tastes, forming an important aspect of its cultural heritage. This point is made very clear by the Earl of Grantham (Hugh Bonneville) as he explains his views about the responsibilities attached to being the custodian of such an estate means to his youthful heir. Highclere Castle is set in an extensive and quite beautiful park with lavish interiors and so the series is certainly ravishingly beautiful to look at. 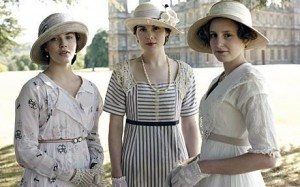 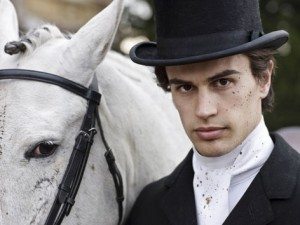 The gowns worn by the lovely ladies will  inspire fashionista’s as the series spreads its influence worldwide. And what the boys wear isn’t half so bad either. There is something about a handsome man in a top hat and tails mounted on a white horse that rings a few bells, even if his journey is short lived.

The first set of fascinating stories are set during the so-called halcyon days, when life in the English countryside was idealized as being untroubled, calm, peaceful, quiet, still, tranquil and heavenly, well so it goes. However the protagonists living upstairs and downstairs in Downton Abbey reveal it was anything but. This is a series whose beautiful script demands attention. 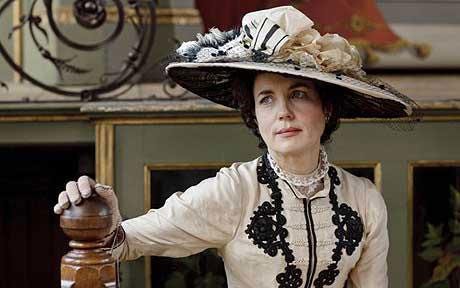 The dynamics of the people who live and work in Downton Abbey draw everyone into their emotional turmoil, one that is mostly internalized by its protagonists against their wellbeing. They are responding to the strict social and moral mores of their day which are under threat by massive societal change, much like we are today.

One of its many celebrity stars the very talented Elizabeth McGovern appeared on the Graham Morton Show over the New Year to share some of the anecdotes from the period of its filming.

The casting is impeccable, with a distinguished list of actors playing the roles of the aristocratic family and its downstairs retainers.

They include that wonderful grand Dame herself, Maggie Smith as the Dowager Countess of Grantham of whom the UK Guardian correspondent said ‘Smith…has a lovely way of delivering words, always spaced to perfection’. It’s good not to reveal too much of the story, my source tells me, but urges everyone to watch. Sadly it will be on commercial television with ‘ads’, so it will be one to buy when it is released on dvd if you want to watch it unencumbered. It seems in England the network was swamped with protests about the ads spoiling the show and its suspense. 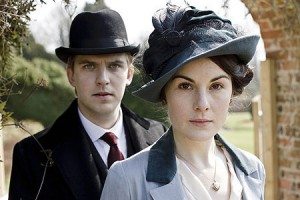 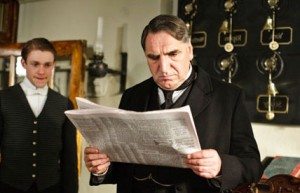 Our considerable heritage has been shaped by constant change, political, moral and social concerns as well as man’s significant technological and scientific achievements. The origin of much of the way of life in Australia is a part of the ongoing English tradition, one that has made a unique contribution to the development of western culture and the life we enjoy and aspire to today.

Americans too will also find a real connection with this series. The wife of the Earl is an American (McGovern). Sadly however she did not produce an heir and spare, only three girls. So the family and the servants are all thrown into a dilemma when the two preferred male cousins, who are the heirs to the estate (woman at this time could not inherit) perish in the Titanic. Massive change appears in the guise of a third cousin, who will inherit the estate. He is only a middle class lawyer whose father was only a doctor and whose mother trained as a nurse.  Good heavens, will he do! Will he be obliged to marry the eldest daughter? Pride and prejudice rise to the fore as this question is asked by both the upstairs family and the downstairs retainers whose lives and livelihoods will be ever changed by this momentous event. Downton Abbey as a series highlights the inescapable fact, that whoever we are,  wherever we come from, and wherever we go, our instincts and existence are still rooted in the land and in our homes. These monuments to all our own dreams remind us all that our survival as a civilized culture depends on the values we embrace and share together.

Downton Abbey - A drama set in pre-WWI England and centered on the dramas of the Crawley family and their servants.

Watch two of the Trailers