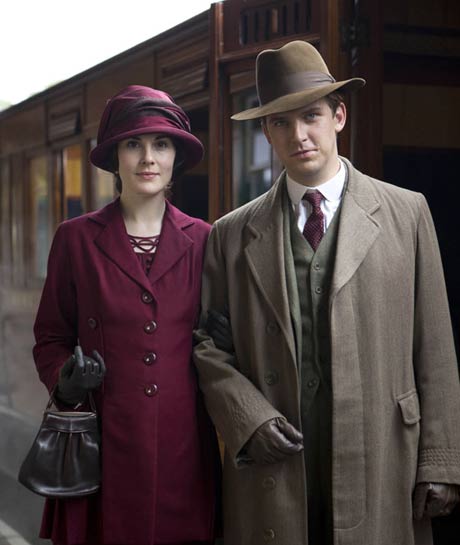 Within a few short years the British television series Downton Abbey has become a part of many people’s experience of life in England, and most especially at Xmas. After spending Xmas Day consuming copious amounts of culinary delights on Boxing Day it seems everyone in England settles in to enjoy the Downton Abbey Xmas Special, which last year gave them the engagement of the dashing Matthew Crawley and the beautiful Lady Mary Grantham, surely one of television, and iTV1’s most attractive couples.

Writer Julian Fellowes chose to set his Downton Abbey Xmas Special for 2012 in the picturesque countryside of the Scottish Highlands, where the glorious French influenced romantic style Duneagle Castle (aka Inverary Castle in Argyll) sits elegantly against a backdrop of spectacular scenery, which has been both man made and forged by nature. Despite all the beauty of the surroundings nothing however could have prepared us for the dramatic and dastardly ending of this year’s addendum to this our favourite television series.

Be warned if you read on as we don’t want to spoil it for you. You will definitely need to have copious handkerchiefs at the ready to shed tears for surely the brightest of all its stars, Matthew Crawley aka Dan Stevens. Our British correspondent is still reeling from the shock of it all. Offering Matthew death in what was the ‘highlands of his life’ was not something anyone had foreseen, although we would all acknowledge I am sure that Dan Stevens is one British actor destined for Hollywood greatness, if he is offered the right scripts. He also created a character who captured our hearts. It is September in our story and the men who are gathered in the highlands look very stylish indeed wearing plus fours, large leather boots and lots of tweed, including dashing ‘deer stalker’ hats. They are there to get involved in shooting magnificent stags while the ladies get set to spend more endless days embroidering, flower arranging, picnicking and talking, just changing one venue for another.

There is one lady in the house though, destined to stir things up. She is the infamous Lady Rose MacClare, whom we met in Series 3 when she created a stir by being very ‘racy’ indeed, causing Lady Edith and Matthew Crawley to come to her aid. She was banished north again, despite Dowager Duchess Violet’s fondness for her. Duneagle Castle is the home of her parents Hugh (Shrimpie) MacClare, Marquess of Flintshire and his wife Susan, the Marchioness and various other family members. In keeping with the modernisation of a period drama writer Julian Fellowes chose to kill off our hero in a thoroughly modern way, at the wheel of his flash new sporting motor car, which in those days did not have seat belts, a roll bar or air bags to protect his considerable person. He was racing home from the hospital in Downton Village, where Mary had arrived home just in time to give birth to her baby locally, aided by the favoured Doctor Clarkson. Matthew was excited to tell everyone their grand news, so that they would all come and visit her.

After surviving the horrors of the first World War Matthew finally succumbs to that very modern curse, the automobile accident, just after seeing his first born son and heir and telling his wife how much he loves her. He has certainly left Mary holding the baby in more ways than one. Just like a Christmas cracker this episode is packed full of special moments. The story starts on such a positive note. All the family packing to go on an excursion to the Highlands and a vacation style visit with their relatives. This was despite Lady Mary being so heavily pregnant, with her first child. It seemed that their experience of Lady Sybil’s demise at birth was not informing the decision for her to go at all. She was determined, and when Mary is determined everyone just capitulates because they known that to oppose her strength of will and purpose is fruitless.

Lady Edith is there, along with her handsome Magazine Editor, who dutifully arrives in black tie and tails to dance a jig and woo her, despite being irrevocably married. He is given short shift by some.

The strange decision to leave the handsome Tom Branson at home alone with his fast growing daughter was equally odd, as the Scottish relatives all seemed so affable when we meet that that we can’t help thinking they would have been sure to welcome him in a house, that was at least as large as Downton. Lack of bedrooms could hardly have been an issue, so it must have been about his perceived lack of ‘class’. Back home the household is busy helping to sort out and establish without any doubt the morals and the fortitude of this handsome man, who will undoubtedly become the next hero of the Downton Abbey saga; Tom, the chauffeur who ran off with Lady Sybil, who also died giving them a beautiful little girl.

Tom is now Downton Abbey’s estate manager, and he and Matthew Crawley have shared ideas about the future of the estate and were before this episode at least, finally setting out to implement them together.

Tom Branson will be sure to set many hearts a’ fluttering in Series 4, including the infamous Lady Rose whose parents have given permission for her to go and stay at Downton Abbey for a while, even though she is such a handful.

In this Xmas Special Branson is sorely tested by a ‘pretty young maid’, who is very keen to invite him into her bed in her eager attempts at climbing the social ladder.

Being mentored by Mrs Hughes, a wise old woman if ever there was one, definitely helps Branson to sort out who he is and who he wants to be and that’s definitely not back in the garage. He now has a child to nurture and protect and a worthwhile position in life, one that will be respected by all those on the Downton Abbey estate, who traditionally look up to the Lord, his family and retainers for guidance, as well as their livelihood. So he makes a wise decision and decides against having an affair that could ruin his life and break everyone else’s hearts. 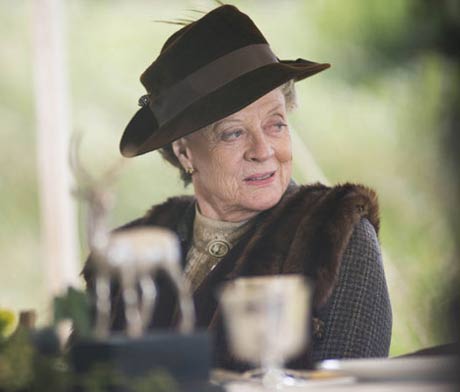 Branson already has the backing of the Dowager Duchess Violet, who despite many protestations has found herself increasingly fond of the character of the families former chauffeur and can no doubt see why her grandaughter Lady Sybil loved him and ran away with him. Now he just has to raise his star and status in the eyes of Lord Grantham.

Back at Downton Abbey while the family is in the highlands, levity is endeavouring to prevail downstairs where the servants all look forward to having a few lighter moments.

Carson however is no mood for them to slack off and sets them to work polishing mountains of silver and turning out all the rooms in the house and cleaning them thoroughly while the family is away. Mrs Hughes and Mrs Patmore are there to lighten his load and to persuade him to adopt a ‘softer’ touch with the staff, which he finally gives into. Except for Carson the ‘downstairs staff’ all head off to a local village fair together, where the family retainers stir up resentment by winning a tug of war match against locals who all seemingly have a big grudge to bear.

Thomas is set upon by this bunch of hooligans, when shadowing protectively the young and handsome Jimmy Kent who runs for help. He arrives with back up only to find Thomas has indeed taken a hammering and their relationship is strengthened. Bates and Anna are also busily enjoying his freedom, and their married life together. They provide yet another backdrop of interest in this special, as does Mrs Patmore who finds herself having a fling with a local who really only wants her for her prowess with food.

Talk about a let down for the old darling. Good thing Mrs Hughes is around looking out for her interest too. She is such a great character too. 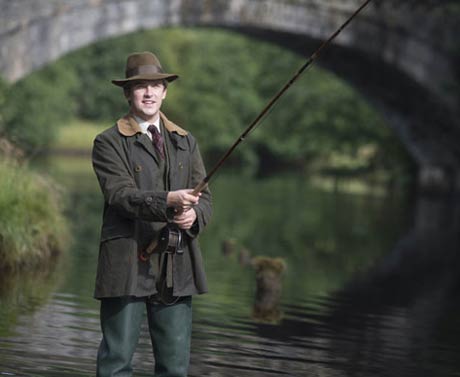 After their sojourn in the highlands the family finally return home following Mary, who had raced ahead to give birth and we don’t find out how they all react, we will have to wait for Series 4.

In the new season ahead the people of Downton Abbey will surely have to provide our Mary with a great deal of support, both upstairs and downstairs, now that her marvellous Matthew is gone.

What we all liked about Matthew was that he was a ‘good man’ through and through, intelligent, smart, resourceful and fair. He was the very essence of what we would all want a ‘noble man’ to be.

He loved his wife and adored their newborn son. He was witty, warm, wonderful and wise and all about the ‘future’. He embraced change patiently, urging all those around him to follow suit.

He was a thoroughly modern man, who was busy inventing the future and we will all very much miss the wonderful warmth of his smile.

By the firsst century AD in Europe jewels overflowed with symbolism and the pearl a miracle delivered by nature, helped showcase your status and rank in society