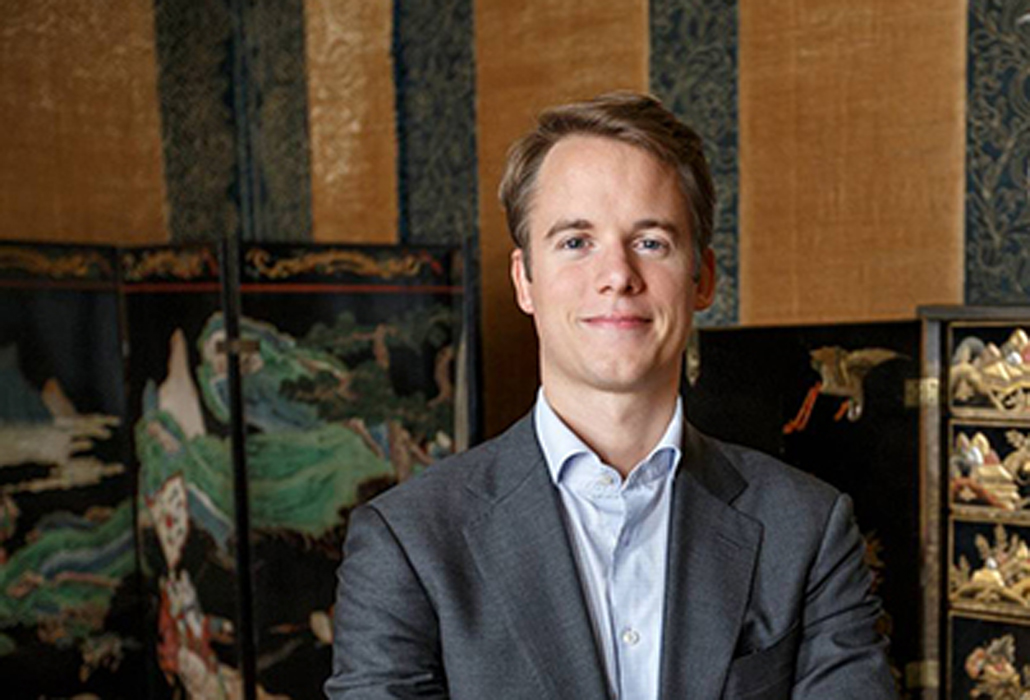 Dr Wolf Burchard is the Furniture Research Curator at the National Trust of England, Wales and Northern Ireland overseeing the research and cataloguing of the Trust’s vast furniture collection

Art and design in architecture historian Dr Wolf Burchard is the Furniture Research Curator at the National Trust, London where supported by The Royal Oak Foundation he is to ‘uncover evidence of an important history, one told through the most spectacular objects’. Today he has an impressive list of credentials, including many outstanding presentations and publications preceding his visit to Australia in Autumn 2017.

Wolf Burchard studied the history of art and architecture at the Universitat Tübingen, Vienna and The Courtauld Institute of Art at London, from which he holds his MA and PhD. He both publishes and lectures internationally on the art and architectural patronage at the British, French and German courts. It showcased the contribution the first two Hanoverian Kings, George I and George 11 and documented how they played an important role in the transformation of political, intellectual and cultural life, assisting Britain’s emergence as the world’s most liberal, commercial and cosmopolitan society, embracing freedom of expression and the unfettered exchange of ideas. Wolf Burchard recently published his book sure to become a landmark reference work The Sovereign Artist: Charles Le Brun and the Image of Louis XIV. It is all about how the King’s favourite designer Charles Le Brun, together with his already famous colleagues architect Louis le Vau as well as landscape specialist Andre le Notre would ensure the chateau would become one of the greatest historical buildings in the world with its famous Hall of Mirrors added 1678-1684 after Le Vau’s death by Jules Hardouin-Mansart. Dr. Wolf Burchard (right) with Prince Ernst-August of Hanover at The Queen’s Gallery, London, during The First Georgians exhibition.

Wolf Burchard is a committee member of The Society for Court Studies in London and past presentations include ‘Where is Hanover? The artistic and dynastic roots of George I and George II’, which was held at the Enlightened Monarchs: Art at Court in the Eighteenth-Century symposium in May 2014 organized by Royal Collection Trust, Wallace Collection and Society for Court Studies.

‘The King’s Brand: Charles Le Brun and the Making of the Style Louis Quatorze’ was presented at a conference organized by the Victoria & Albert Museum, London, entitled ‘Lambrequins and Luxury: Ornament in the Time of Louis XIV and Beyond’ on 5 December 2015 While he is here in Australia Wolf Burchard will be giving talks in a number of institutions. At the National Gallery of Australia (NGA) in Canberra he will speak at their symposium Enchanted isles, fatal shores: Living Versailles to be held March 17 and 18, supporting an expansion of knowledge through their outstanding exhibition Treasures from Versailles, now in its final weeks of viewing.

The subject of his talk is ‘At the centre of the world: Charles Le Brun’s Ambassadors Staircase at Versailles’ where he will reveal the King’s favourite designer Charles Le Brun as a man achieving in royal circles glamorously by translating the Sun King’s visions into reality. Le Brun was indeed the equal of artists such as sculptor Gian Lorenzo Bernini and painter Peter Paul Rubens in their day, which has often been overlooked in the world of fine art.

On March 19 still at the NGA Burchard’s presentation is entitled A European Royal stage: Louis XIV’s Savonnerie Carpets will be sure to include urging everyone to view the spectacular number on view in the second gallery of the exhibition.

This stunning example of wondrous weaving commissioned by the King to adorn the floor of the Grande Gallerie du Louvre (a Royal palace at that time), was made between 1670-1685). Visiting Melbourne on March 20, Wolf Burchard will give the annual Robert Wilson Decorative Arts Lecture at the National Gallery of Victoria entitled The Throne Chair; A Symbol of Status from Antiquity to the Present. Chairs historically from thrones to stools, from stuffed to overstuffed, from Rome to Renaissance, Baroque to Bauhaus are about much more than seating.

On March 21, he will lecture for the Johnston Collection on Unlocking International Treasures | Furniture in the National Trust of England Houses.

In Adelaide on March 23 and 24 he will be involved in two talks, the first about Waddesdon Manor – The Rothschild Treasure Trove, which is already sold out. The second will see Sue Crafter, Honorary Consul of France join into the French-themed seated dinner held in the new wing of The David Roche Foundation House Museum and Gallery where the presentation is ‘The Art of Absolutism – Louis XIV and Versailles’.

He will visit Sydney for the Furniture History Society where he will give a presentation ‘Charles Le Brun and the image of Louis XIV‘ in the Annie Wyatt Room in the National Trust Centre, Observatory Hill on Monday March 27.

As we say here at The Culture Concept Circle, art, design, music, fashion and style all reflect the very essence of our culture, its attitudes and philosophies, its fashions and passions. Join into one of these very special events, and you are sure to open a window onto a whole new world.