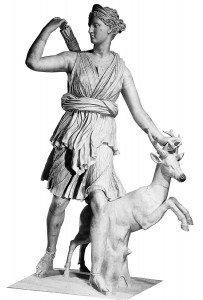 Costume encompasses all we wear, including jewellery, hats, gloves, shoes, accessories and the previously unmentionable undergarments.  Fashion is imposed on costume, dictating and reflecting the changes and concerns of a society in any one place at any one time. Costume projects our beliefs both religious and spiritual, while aesthetically conveying an image purely for purposes of personal status or, to accommodate a desire to be distinguished from others in a culture and its society. Costume in ancient times fulfilled a function far beyond just utility. Ornamenting the body with animal skins identified the wearer as having strength, as in the case of Hercules, or with the head of a magical beast, as in the case of the Goddess Athena, who protected Athens. Costume inspired fear or imposed authority. The Greek Goddess Artemis was well equipped in her short tunic for running fast in pursuit of game, her bow an attribute aided her conquests.