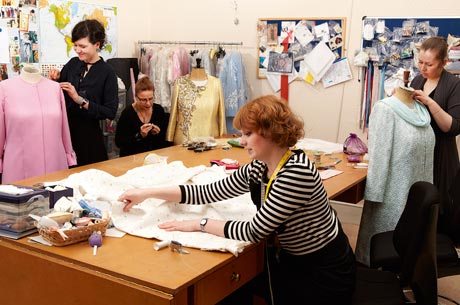 The Royal Collection Trust has just released a new publication Dressing The Queen: The Jubilee Wardrobe is definitely one for the books. It explores how Her Majesty The Queen has stood out from the crowd on her many engagements during 2012 her Jubilee year always maintaining her unfailing sense of style.

The author tells the stories behind the outfits worn by Her Majesty for the many highlights of 2012, such as the Thames Diamond Jubilee Pageant, the Diamond Jubilee Concert and the London 2012 Olympic Games Opening Ceremony.

Written by Angela Kelly, the Personal Assistant, Adviser and Curator to Queen Elizabeth II, this royal publication provides a first-hand account of the work of the team of dressmakers and milliners directly responsible for The Queen’s wardrobe. Do you think Mr Bond will like it - Angela Kelly making 'the dress' for the Bond moment during the Opening of the Olympic Games - 2012 - courtesy Royal Collection Trust (c) 2012, Her Majesty Queen Elizabeth II

The logistics are certainly impressive and the system for production well thought out and highly efficient; from the choice of designs to the fabric swatches; then the technical drawings; the drafting of a pattern is completed; a prototype of the outfit is made so getting the details right is achieved before the fitting.

Making four or five outfits at a time, complete with hats, the prototype fittings can last for at least half a day. Once all that has been completed then the actual garment is made from the fabric chosen and the hats to complement each outfit produced by the milliner.

The Queen’s concern to be seen by as many people as possible on public engagements and consideration for her hosts influence the design of what she wears. The day before Her Majesty is to wear any outfit she tries it on and the choice of jewellery and other accessories are made from her wide selection of handbags, gloves and shoes. Then the outfit is ready.

Once it has all been finalised and achieved The Dresser’s Diary records every single event and the outfit worn. The whole process is an archival and curator’s wonder There are many ‘frock fable’s to tell, especially how they needed to create two identical dresses for the ‘James Bond’ part of the 2012 Olympic Games Opening Ceremony.

The author also tells the story of her team’s involvement in the behind-the-scenes planning of the whole James Bond sequence.

The team of dressers spent almost two years planning for the Central Weekend of the Diamond Jubilee celebrations. The white outfit worn by Her Majesty for the Thames River Pageant on 3 June was inspired by the jewelled, white costumes favoured by Elizabeth 1.

The whole idea was that it was designed to stand out against the deep reds of the Royal Barge, Spirit of Chartwell.

For the Jubilee Concert on 4 June, The Queen’s shimmering golden dress echoed the colour of the Victoria Memorial in front of Buckingham Palace, around which the concert took place.

Angela Kelly explains that the fabric itself made reference to The Queen’s long reign, because it was purchased overseas in 1961.

This book is certainly a must for any history of costume lover’s library and for those interested in the evolution of society and style.

Art from the Hearth is a unique exhibition of decorative arts; a stunning array of ceramics, rare objects and art from Adelaide collector David Roche’s kitchen