And did those feet in ancient time, Walk upon England’s mountains green, And was the holy Lamb of God, On England’s pleasant pastures seen!…

Duchess Kate (Catherine) of Cambridge is an overnight sensation, a style icon and a woman for the future, one who displays a respect for all people and the past. On just one day with one event she boosted Britain’s morale, its arts, its industry, its manufacturing and its commerce. Every new generation needs its own societal leaders. In the Duke and Duchess the present one has two very fine role models. She and her Duke will change the face of the monarchy through their intelligent use of digital media, as already apparent by the clever use of its immediacy and tradition and in a spectacular wedding service held in the very ancient abbey at Westminster.

The 2011 Royal Wedding celebration was a splendid scene of pageantry, respecting all  people, faith and tradition, while presenting a new style for a new age, one that cares openly and deeply for community. It saluted a refinement of taste by embracing the principle of less is more, for the whole of this very stylish royal wedding event. Kate and her Wills have placed the royal family back at the forefront of leadership by example proving that when two people love each other, as much as she and her Prince, well anything is possible even in a big society. 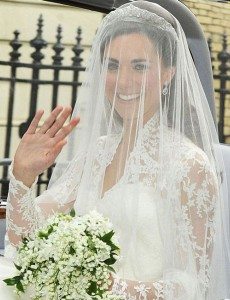 The fashion industry all around the world must be turning cartwheels of delight as the all new very savvy Duchess Kate gives a boost to its billion dollar bride economy, which is booming, despite difficult times globally. As if the designer Sarah Burton of Alexander McQueen had not surpassed herself with the stunning bridal gown, with its glorious satin and Brussels lace combination, the addition of a superb reception dress to the bridal wardrobe is just pure genius, and it is sure to become the rage.

Continuing the lovely lines of the bridal gown with the shape of its bodice, she added a gentle fuller skirt whose folded soft lines were highlighted by the diamante glamour belt to end all glamour belts, adorning and detailing the waist. Then to provide the warmth required on a cool London Spring day, a small bolero of warm, fluffy angora. It was all so very 50’s inspired, very elegant, very fresh, very clean and very clever. Going off to your wedding feast to greet your guests feeling refreshed and looking very glamorous must have made Kate feel fabulous.

Following World War II it was the launch at Paris of Christian Dior’s Couture New Look collection in 1947 that gave the city a boost and re-established it as the world’s fashion capital for the coming generation.

With Kate as its leader, her team of creative people have done the same thing here. The style of the dresses for the royal wedding paid tribute to an innovative dynamic Dior, while acknowledging Paris as today’s world’s creative fashion centre of inspiration. At its heart was the fairytale bride, looking so beautiful in her graceful gown. The delightful lace top covering her arms and bare shoulders, brought back a sense of mystery, while showing an understanding and a deep respect of what melding love and life together in a religious Abbey is all about. A Duchess, not a princess, Kate nee Middleton helped by her strong supporting cast, which included her elegant, streetwise parents and siblings surely masterminded the most chic celebration for a wedding, royal or otherwise, yet seen.

Certainly it was one of the most attractive royal weddings ever, albeit it in an understated way. It was a combination of charm and good looks capturing the magic, enchantment and excitement of this couple’s very special day.

Inside the entrance to the Abbey six splendid maples and two hornbeam trees paid homage to its architectural history and were an important up front statement. Lent by Prince Charles, they were grown at Highgrove his home in the country and will return there to be planted in the ground as a celebration of this happy family event.

As Prince Charles is all about conserving nature, the heritage of Britain, its architecture and its culture it was also very apt. Bringing nature and art together in harmony with trees whose symbolism stands for resilience and humility was a nice touch.  Maple is used in Britain for making harps, a truly heavenly instrument as well as loving cups. The train was brought back to a level that could be managed, less fabric, less cost. It only needed one bridesmaid, instead of six to carry it, her sister Phillipa Middleton, whose gown was another triumph for Ms Burton.

It also meant that Kate could involve children in the event. The Hon. Margarita Armstrong-Jones, 8, Tom Pettifer, 8, Lady Louise Windsor, 7, Master William Lowther-Pinkerton, 10, as well as Grace van Cutsem, 3, and Eliza Lopes, 3  whose presence proved the importance of both family and friends at such a happy time and occasion.

The little girls just wanting to have fun all wore custom Nicki Macfarlane gowns. They had been handmade of the same fabric as the bride’s dress and embroidered with their names and the date of the wedding.

The boys having fun were in striking red uniforms, reminiscent of a Foot Guards officer during the Regency era of England’s history. The insignia they wore was drawn from the Irish Guards, whose Colonel is Prince William.

The wedding veil was sheer and short, but breathtaking in its lace edged simplicity.  The tiara, lent by the Queen was an elegant one by the French jewellery house Cartier that she was given as a young woman, just right.

The flowers around and above the altar were elegant, as was the wedding bouquet, which contained Hyacinth, lily of the valley, myrtle and sweet William, flowers that grow so well in the English countryside. They were all about quality and romantically linked to the meaning of flowers. Hyacinth is for constancy and loveliness, which Kate was and is. Lily of the valley is for humility, sweetness and means making my life complete, so a message for both the Duke and Duchess. Myrtle is for love, remembrance and an ancient Hebrew emblem for marriage, so a delightful homage to both tradition and faith.

Sweet William, well it’s all about gallantry and so hopelessly appropriate for the dashing Prince that she married.  Sending them back to lay on the tomb of the unknown warrior at Westminster honoured a tradition started by the Prince’s great grandmother and showed respect for all those men who so valiantly gave of themselves so that others may benefit. 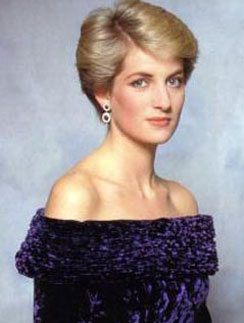 Everyone wants a fairytale, as this royal wedding has highlighted.

Duchess Kate has begun her new role by instantly becoming a royal style icon, stepping out from the footprints left by her husband’s famous mother, Princess Diana. Congratulations Kate, well done. Trust a ‘commoner’ to get it right. You were very appropriate. Politically correct, perfectly poised in your new role of leading your own generation and the one that comes after forward by example.

That’s what Style icons do and you have succeeded on day one.

Your husband had a superb role model example in his mother, Princess Diana. While her private relationship was in turmoil, she remained constant in preparing her two sons for their future life in the public gaze. She continued to show the way forward by offering them an example of truth, of the importance of giving of self and the importance of connecting with the community that was second to none.

It is what a royal family is meant to be all about, helping the rest of us to be the best that we can be by example. 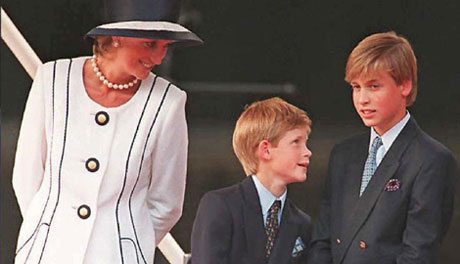 Her compassion, care, giving generous spirit and goodness was integral to who she was as a person, at the very essence of her being. This she imparted to her sons throughout their lives with her, that despite losing her in their teens has become second nature for them and at the heart of who they are as well.

Your husband Kate, the Duke’s mother was instinctively affectionate with a sense of fun but she tempered it with the willingness to accept the reality of taking happiness where and when you find it, rather than being in a euphoric state all of the time suspending reality. This is the most important part of her legacy. And, Kate if you follow her lead at least in that regard, you will enjoy a happy and fruitful life.

You have earned and deserve our respect.

William & Catherine, Wed at Last – From Romance to Reality

It’s all over. William and Catherine, the Duke and Duchess of Cambridge, are wonderfully wed in the sensational setting of an ancient Abbey at Westminster. Congratulations we have certainly enjoyed toasting your good health with a few bubbles and celebrating the joie de vivre with you.