We started the year in Australia in crisis and chaos with flooding like never before in both Queensland and Victoria.

There has been many lives lost and destruction, on such a scale, that for many it must seem hard to fathom. It is certainly heartbreaking.

Scenes of my hometown of Brisbane from 1999 – 2009 were particularly distressing. I have talked about Brisbane in the aftermath of nature’s fury and hope to have a visit there in the coming weeks to be in touch with family and friends as they reclaim and rebuild their lives.

For residents in rural Victoria on top of years of drought the devastation has indeed been soul destroying.

In The Culture Concept Circle – Muse~News January 2011 this month we have a link to the announcement of a concert to be held in Brisbane early in February to benefit its flood victims.

This will be a great night out and for those who were perhaps not affected as much as others an opportunity to help their neighbours.

There will be many other fund raising efforts to benefit flood victims I am sure. The Aussie spirit remains strong and the continuing tradition of mateship has certainly been confirmed.

There is much to look forward to at home on television this year. Must admit I enjoy the variety of shows to choose from. There is surely something for everyone. 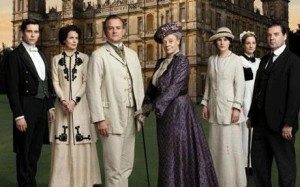 Downton Abbey would be at the top of my list as a must see.

This terrific tale of people living both upstairs and downstairs on a country estate in England during the days prior to World War One has much to commend it for. Especially in the script writing, the tremendous acting from a wonderful group of players and, the costume, well the costume is divine.  Maggie Smith is quite delicious as the Dowager Countess.

The South Pacific is the subject of another splendid nature series, which is currently half way through on ABC 1. It can be also caught up on IView. It is narrated by Benedict Cumberbatch of Sherlock fame.

You can also catch up with Alexander in the East – from great to God – glossing over, or getting to the facts. He seems to be the flavour of the month with some historians at the moment.

We have started the year talking about gardens including Flora, First Fleet to Federation. Then there is First Impressions and Lasting Impressions with the art of gardens in France. And, in Japan we talk about the bountiful beauties of old gardens that are really breathtaking.

Log onto the Home Page of our blog where there are many new articles and conversations to hand for your consideration.

Our On Line Video of the month is Culture in the Colonies just in time for Australia Day.

We look forward to positive times ahead, and some special news for Subscribers to be detailed in February’s issue.

Watch the Trailer of South Pacific