The agricultural depression of the late nineteenth century removed land as the chief source of wealth in England. By 1901 money to pay for a country house had to be made in urban centers of trade or, in the countries that made up the British Empire.

Stylistically they looked back to the English vernacular tradition, which had been modified in response to the differing requirements of affluent clients. In his design for the garden front of The Salutation at Sandwich in Kent, Lutyens spoke its language better than any of the late Victorian architects whom later laid claim to it.

The house has a large hipped roof, gigantic chimney stacks, was built in brick and detailed on its corners with stone quoins.

At the time Inn stood on the site where this contemporary solution was built between 1911-1912 for William, Gaspard and Henry Farrer.

This new establishment was a weekend retreat, enabling them to enjoy the combination of the countryside and coastal air.

Its design and style pays homage to the so-called Queen Anne style, built originally in the late seventeenth century. It had nothing to do with Queen Anne herself but was alluding back to, a style of architecture first introduced into Britain by William of Orange who came over from The Netherlands to become King William III (1650-1702).

She was picturesque, homely, full of grace and dignity, totally English, domestic and very unpretentious.

It was a dutch gabled style all sweetness and light flourished,  satisfying the needs of the English middle classes, at a time when they were in the height of their prosperity and power. The house represented their new found wealth,  growing sophistication and an image to suit the newly acquired style of its owners.

It was an architectural cocktail, with a dash of Dutch, a little Flemish, a squeeze of Adam, a generous dash of Wren and even a touch of French. The garden overflowed with select shrubbery and herbaceous planting whose brick paths were softened by billowing herbaceous borders.

They were full of lilies, lupins, delphiniums, and lavender in direct contrast to the very formal bedding schemes favoured in Victorian times..

This new natural style was to define the layout of the English garden until contemporary times. 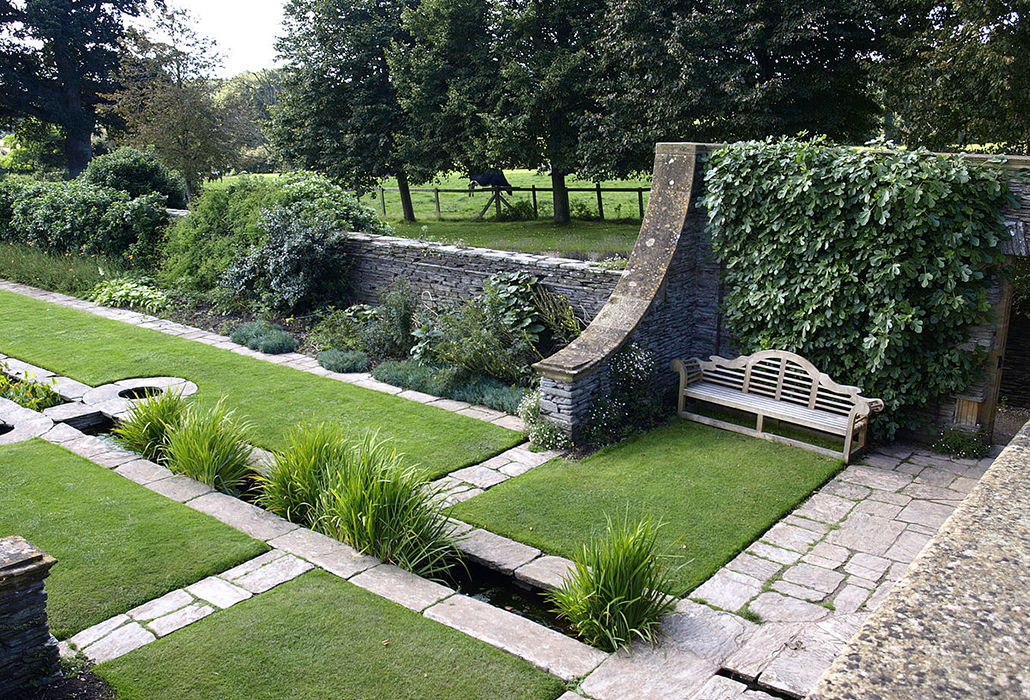 Each house and its garden designed by Lutyens and Jekyll was a complex, and sometimes eclectic enterprise, built of materials found locally.

The garden bench that he designed for contemplation would soon become an icon.

They were partners, without hide, and they designed for living….

It’s fearfully Maison – Jardin at number 7B.
We’ve rediscovered the chandelier:
Très, très very contemporary.
We’re terribly house and garden though at last we’ve got the chance.
The garden’s full of furniture and the house is full of plants.
It doesn’t make for comfort but it simply has to be
Cos we’re ever so terrible up-to-date, contempo-rar-ary.* 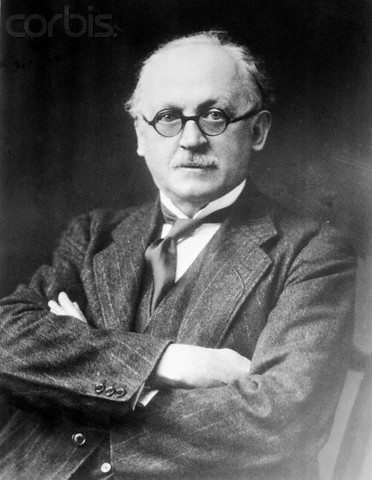 Original Caption of this portrait taken 27 Feb 1925 Sir Edwin Landseer Lutyens, distinguished British Architect, who is to receive the gold medal of the American Institute of architects, the highest award the Institute can make at the architectural and Allied Arts Exposition in New York, next April. He is the architect for the famous Queen’s Doll House coating several million dollars, and has designed many notable buildings in London and was just recently commissioned to design the British Government buildings at Delhi, India

Edwin Landseer Lutyens (1869-1944) was named for his father’s hero, the great Victorian artist, much loved by Queen Victoria and Prince Albert. He was dedicated to regenerating the notion of house and garden being complimentary to each other. He had no formal education but studied buildings around his home at Thursley in Surrey along with Gertrude Jekyll, who would help him project the complete image of an English home.

Lutyens houses are a synthesis of ideas shared by contemporaries such as Frank Lloyd Wright in America. New technology was accepted but disguised. radiators veiled behind lattice work, electric light bulbs hidden in eighteenth century style lanterns or disguised as candles. In the bedrooms at Lutyen’s folly farm, cupboards of massive joinery opened to reveal wash basins of the latest design, the only rooms where technology was let loose the kitchens and bathrooms.

The motor car was placed in a garage disguised as a barn as the ethos of country romanticism did not have an earlier solution he could call on to deal with this problem. Delights of the Garden by Gertrude Jekyll at The Salutation

Kitchens were out of view and bathrooms secret places set apart and in bathrooms country house architects tended to let themselves go, indulging in untraditional and often expensive fantasies in glass, marble or mosaic.

Edwin Lutyens commissions were varied in nature from private houses to his contribution to India’s new imperial capital New Delhi, where he worked as chief architect with Herbert Baker and others.

Gertrude Jekyll (1843-1932) designed and consulted on more than 300 gardens for Edwin Lutyens. 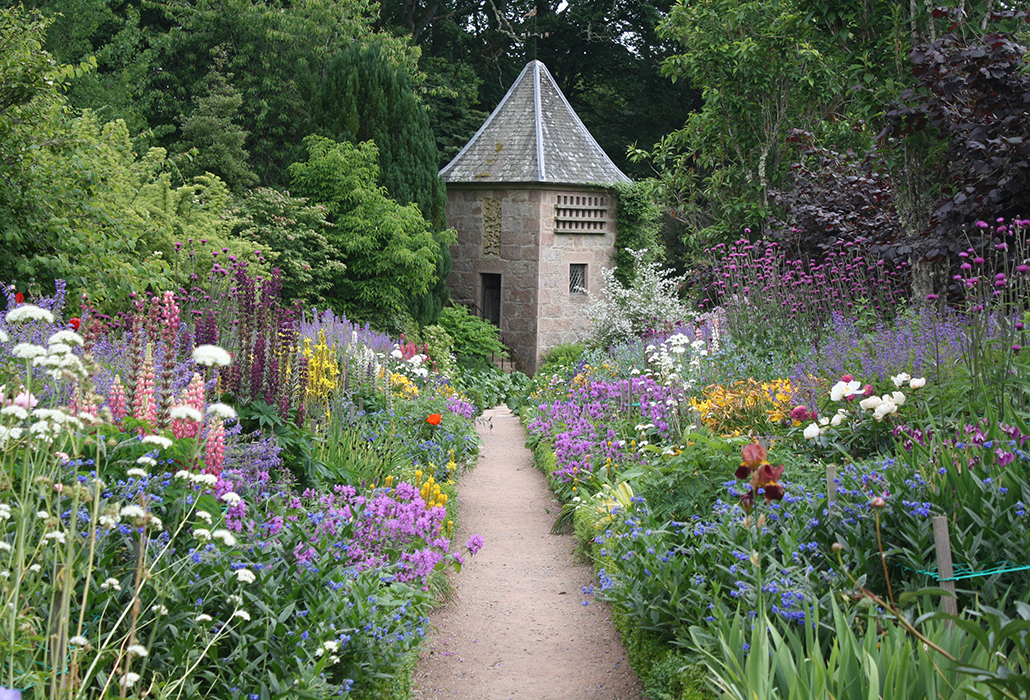 Glorious border of gardens at Hestercombe Park by Gertrude Jekyll

She had a great influence on promoting color design in garden planning. She grouped and interlaced flowering perennials and shrubs in broad herbaceous borders producing a show of color throughout the season.

She used pergolas and trellising near the house with woodlands, under planted with shrubs, ferns and flower and variegated with pools and walks beyond.

Gertrude was a women of independent means who did not need to work all the time for her living. As such was able to devote much of it to the care of what she called ‘my little wood of ten acres’.

Art school trained, she had practical experience in embroidery, metal work, woodcarving and interior decoration until her eyesight deteriorated when she settled into her second life as a gardener in the 1880’s. 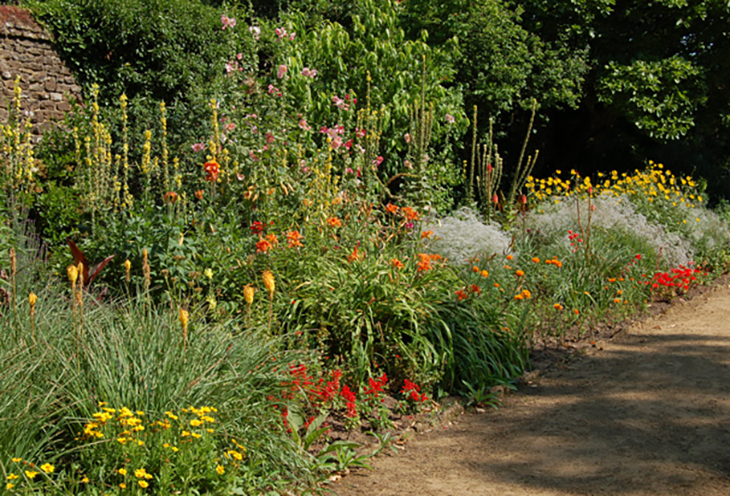 Colourful borders were a feature of Gertrude Jekyll gardens

She enjoyed colour in the flower garden and said ‘to plant and maintain a flower border, with a good scheme for colour, is by no means the easy thing that is commonly supposed. I am strongly of the opinion that the possession of a quantity of plants, however good the plants may be themselves and however ample their number, does not make a garden; it only makes a collection. Having got the plants, the great thing is to use them, or having them planted un-assorted in garden spaces, is only like having a box of paints from the best colourman, or, to go one step further, it is like having portions of the paints set out upon a palette. A contemporary of the Impressionist painters Gertrude Jekyll placed each plant as the French Post-Impressionist painter Georges-Pierre Seurat might have placed a spot of colour in his paintings, not isolated, but playing an important contribution to the whole effect.

She naturalized plants. Her wood was planted to project ‘a series of soul-satisfying pictures’ each group leading to another like pictures in a gallery. She also became Country Life’s authority on the ‘order and beauty of the woodland and garden’. In her Gardens for Small Country Houses

‘It is upon the right relation of the garden to the house that its value and the enjoyment that is to be derived from it will largely depend. The connection must be intimate, and the access not only convenient, but inviting. The House in the great number of cases…should be raised above the ground level. 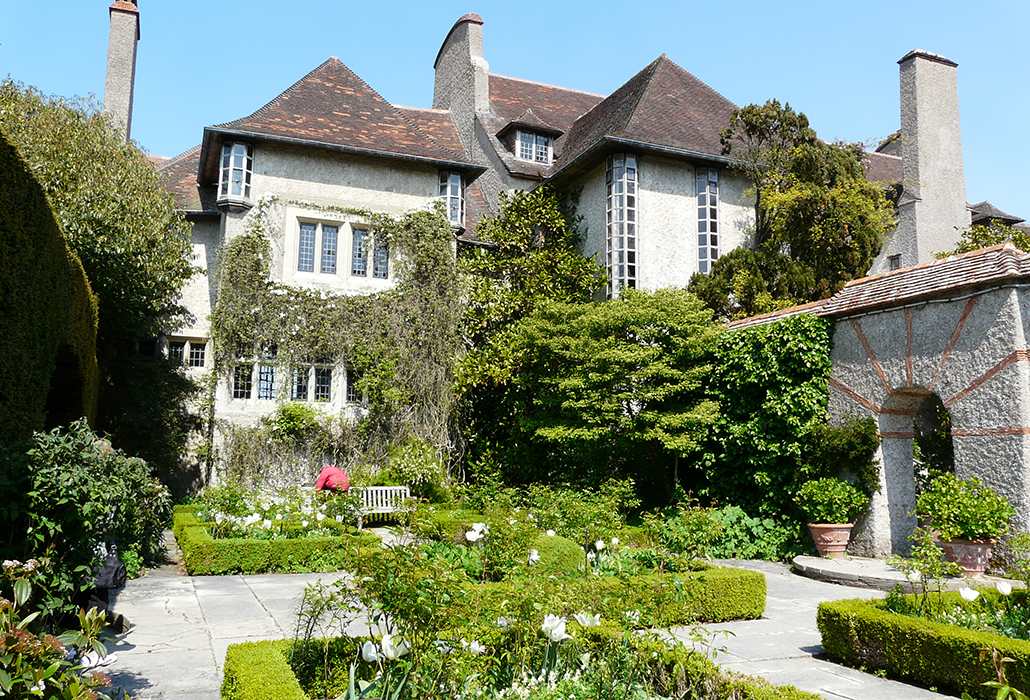 This was not only to accommodate foundations and cellars, but also to allow for a terrace on the sunny side of the house, where one could gather with friends for luncheon or tea as well as drinks before dinner or to gaze at the moonlight after dinner in the summer.

Her borders were long rectangles and she planted them both for colour and seasonal effect. There were grey borders, September borders and grey September borders. In the grey border there were pink hollyhocks, echnops blue, Achillea Pearl (pale cream) gypsophila (tiny white flowers) and heliotrope(a strong purple) against a background of grey foliage.

She used yellow only rarely as it was a colour a painter of water colours would know as dangerous. And strong colours such as reds and hot blues etc., she hardly used at all. 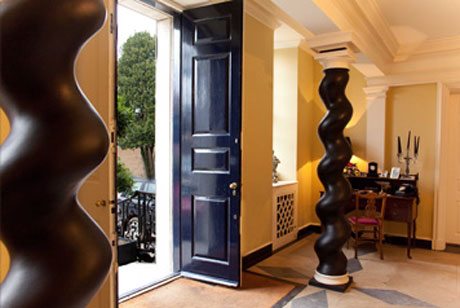 Interior Entrance The Salutation at Sandwich in Kent

The nineteenth century was all about revival architecture and a fashion for Tudor or Jacobethan houses encouraged a return to the architectural garden, at least around the house. For mock houses and surviving authentic ones it was considered appropriate to recreate gardens of their original period.