Setting the scene. It is May 28th, 1919 and two men are being helped to climb a steep hill at Principe in West Africa with a great deal of equipment, including a huge box from the British Royal Astronomical Society. They are there to photograph the solar eclipse on May 29th, 1919 and endeavour to prove a theory. It is the slighter of the two who says 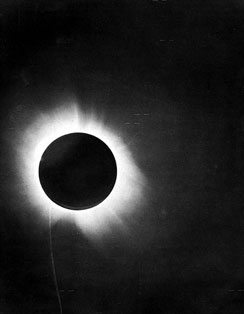 “if the cloud breaks at a quarter to two tomorrow and we look up into the heavens and take photos of the eclipse we will be scientists at our work and we’ll be looking at the poetry of existence, and if Einstein’s right the universe will never look the same again”…#

There are many memorable quotes, phrases and delightful practical demonstrations making academic concepts accessible to the lay person in a made for TV movie Einstein and Eddington.

Written by British Playwright Peter Moffat (Criminal Justice, Cambridge Spies, Silk) Einstein and Eddington is set in the first two decades of the 20th century, when German born scientist (later an American citizen) Albert Einstein (1879 – 1955) is being challenged to produce his theory of general relativity. 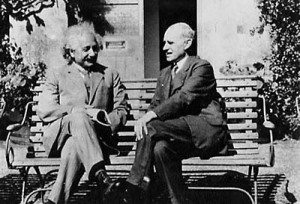 The real Einstein and Eddington

Eddington and his academic colleagues are all avowed Newtonians. They believe the three laws of motion as put forward by Sir Isaac Albert Newton (1642-1727) one of the most influential people ever in the world are correct, although they say they try to always keep an ‘open mind’.

This does not always work especially when Einstein challenges Newton’s theories because he believes that Newton may have got it wrong.

Einstein and Eddington was made in 2008 for BBC 2. It seems to be one of those marvelous gems of British film making that these days often seem to fall through the cracks and not reach us for a long time in Australia.

Imagine the tablecloth is the universe...

‘Everything should be simple, not simpler’**

Arthur Eddington was the first to understand Albert Einstein’s ideas and worked hard to prove them correct and this became a turning point in the advent of modern day physics.

A committed Quaker Eddington believed avidly that nationality should not be a barrier to sharing scientific knowledge with the world. He had no form of prejudice associated with Einstein being German born and for this he suffered greatly in a world climate of war.

Eddington is played by popular actor David Tennant (Dr Who). Arthur Eddington was a well know British astrophysicist of the early 20th century who was able to make difficult subjects accessible by explaining them in a format most could understand.

Now the bread represents the sun..

A great demonstration of the theory practically comes when Eddington is trying to relay the concept of general relativity in lay terms and in a clear and entertaining way to his sister and his friend and colleague Frank Dyson. 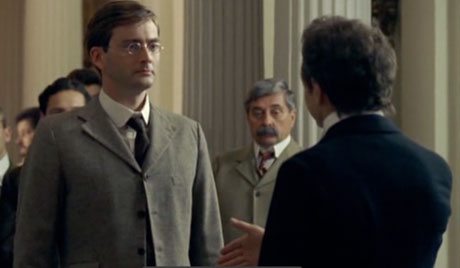 Arthur Eddington says see ‘It *wants* to travel in a straight line, but it can’t. Why not?’
Winnie Eddington observes ‘Because the bread is making a shape’
Frank Dyson cuts in excited…’The apple follows the curves made in space’.
Arthur Eddington says Yes. Yes, space is shaped. And ‘that’ is how gravity works.

Space tells objects how to move.

Objects tell space what shape to be.

And there’s a way to prove it.”

Eddington by proving Einstein’s theories instantly transformed the previously unknown scientist into one of the world’s most recognisable people and a household name. Einstein’s Theory of General Relativity and its extraordinary predictions – The Big Bang, Black Holes in Space etc have inspired each new generation of scientists including Wonders of the Universe advocates like Britain’s Brian Cox ever since.

Einstein became famous during his lifetime and his name became synonymous with the term ‘genius’, which always seem to be accompanied by a sensual passionate nature. In Einstein and Eddington both scientists exhibit this trait. Eddington’s true feelings sadly remain repressed owing to his religious beliefs and the reality of British social mores of the time. Einstein on the other hand allows that side of his nature to be completely free. 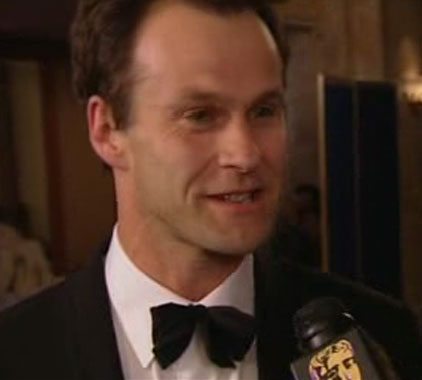 ‘When you are courting a nice girl an hour seems like a second. When you sit on a red-hot cinder a second seems like an hour. That’s relativity’. **

Arthur Eddington’s work after this important moment was mainly forgotten until this part of his journey was re-told by Peter Moffat.

Thomas Paine, the English-born revolutionary who became one of the founding fathers of the USA, like many today had an entirely different response to the observation that ‘great minds think alike’.

He expressed his opinion in the 1792 political pamphlet The Rights of Man, edition 2 : ‘I do not believe that any two men, on what are called doctrinal points, think alike who think at all. It is only those who have not thought that appear to agree’.

What: Einstein and Eddington
Written by: Peter Moffat, one of British TV’s most successful screenwriters
Who: David Tennant (Doctor Who, Blackpool, Recovery) and Andy Serkis (Longford, King Kong, Lord Of The Rings) with Jim Broadbent (Longford, Lucy Cohu (The Queen’s Sister), Rebecca Hall (Starter For Ten) and Jodhi May (Friends & Crocodiles). Written by Peter Moffat (Hawking, Cambridge Spies), the producer is Mark Pybus and the director is Philip Martin (Hawking, Prime Suspect).
Where: Buy it on DVD at Amazon

Precision and Splendor: Clocks and Watches currently on show at The Frick Collection New York illustrates their stylistic and technical developments 1500 – 1830