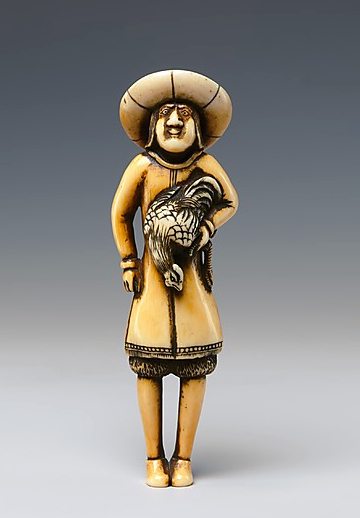 Decorative little toggles called netsuke – pronounced “netskeh”, literally meaning “root for fastening” made their debut in late seventeenth century Japan. Such objects, often of great artistic merit, have a long history reflecting important aspects of the evolution of Japanese life and society. Symbolism and elements of nature are frequently seen in Japanese art, including Netsuke such as this delightful foreigner carrying a ‘fighting’ cock.  These also include heraldic decorative devices.

The roots of Japanese symbolism are found in Heraldry (court & warrior society) and their religions (Shinto & Buddhism). Around the world since antiquity armies in the confusion of battle distinguished friend from foe with symbols painted on banners, shields and flags, As well as identifying allies and opponents, the practice performed the function of glorifying individuals by ensuring his personal achievements were easily recognised. 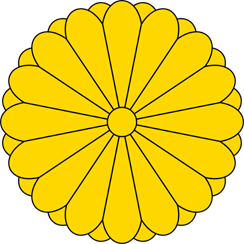 The best known features of Japanese heraldry are devices called mon, crests that are simple, yet elegant motifs. The origin of the mon dates as early as the seventh to eighth centuries, when Chinese emblems of great antiquity: the sun, moon, dragon, tiger, tortoise to name a few, were imported to Japan by means of the patterns on the courtly costumes of the Tang dynasty. Favourite designs produced came from foliage, grasses, butterflies, water, insects, fish, chrysanthemum plum and cherry blossoms.

The mon became a fashionable emblem of the highly refined elite Heian class, placed not only on clothing, but also on the carriages of the noble families as the gradual emergence of patterns and designs came to represent family identification. In Japanese heraldry, unlike in the west, colour is unimportant: the mon was not carried on a shield, but as a small circle – perhaps an inch in diameter – worn on the back of the neck. Other copies would be worn on various other parts of costume. 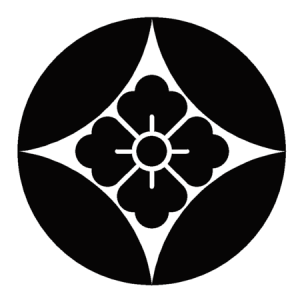 By the seventeenth century there was hardly a family among the upper classes in Japan who did not posses and regularly use several family crests.

London, today in summer abounds with all types of fairs, including Masterpiece, Art & Antiques at Olympia & the London Art Week Fair, on show July 1 – 8, 2016