Crusty bread and salted butter provided a delicious accompaniment to the start of the meal at Eleven Madison Park. Photograph by Belinda McDowall

On the evening of Wednesday, 5 April 2017, at Melbourne’s glorious Royal Exhibition Building, the San Pellegrino World’s 50 Best Restaurants for the year were announced. For the first time, two Australian restaurants made the cut – No. 32 for Attica, in Ripponlea, in the South Eastern suburbs of Melbourne and No. 44 for Brae, in Birregurra near the Great Ocean Road in Victoria. And crowned King, Number 1 Best Restaurant in the World for 2017 was Eleven Madison Park, in New York City.

Having experienced a few of the restaurants in the top 50, and being particularly fond of a degustation menu, I was fortunate enough to visit Eleven Madison Park last September, during a trip to the United States with my husband. Eleven Madison Park was the finale of our trip to New York City, the trip that change my mind about the Big Apple. Having first visited in my early twenties, at the tail end of the twentieth century, I was one of the few people who claimed to dislike New York. I was a different person then. Then, I had made the journey alone. I wandered the streets of the city at dusk, glancing into the windows of restaurants, catching glimpses of diners clutching their wine glasses, enjoying a night out, and I wondered what it would be like to visit with a companion. I had visited many other cities alone, and loved each one of them, but at that time New York left me cold. It seemed to be a city to be shared with another, with its bars and restaurants and nightlife. Despite my aversion to the place, I was to return to New York City almost twenty years later, in the early Autumn of 2016, with some life experience under my belt, and a husband by my side. During the intervening period, I had learned about architecture, developed an appreciation for art, and a taste for fine dining. And this time, I loved every second of New York City. I would now go back in a heartbeat.

We visited the Met and the Guggenheim, we went shopping down Fifth Avenue, we indulged in an enormous New York-style pizza in Brooklyn with some Australian-turned-local Brooklynite friends, we promenaded with the locals on a sunny Saturday afternoon in Central Park and, on our final night, we donned our finery and dined at Eleven Madison Park. The night began early – we had a 5.30pm booking – we found this was preferential in order to get through the many courses on offer.

The restaurant is housed in impressive Art Deco building, now known as Eleven Madison, but originally the Metropolitan Life North Building, overlooking Madison Square Park, a wonderfully green square in the centre of the Flatiron District. Since 2006, it has been owned and run by Chef Daniel Humm and restauranteur Will Guidara.

The restaurant is glamorously understated, with sky-high ceilings and luxuriously tall crystal vases filled with golden lilies and sunflowers.

We were seated at a white-clothed table that could easily accommodate six guests, and offered an aperitif. And so began one of the most amazing meals of I’ve ever experienced. One of the many amuse bouche on offer, cucumber, honeydew and mint. Photograph by Belinda McDowall

Each course was a masterpiece, and little piece of theatre, with fresh and delicious ingredients, and a dash of wit on the side.

The amuse bouche to start were displayed on beautifully carved hexagonal boxes, refreshing bites of cucumber with honeydew and mint, cantaloupe (rockmelon) with smoked watermelon.

Crusty bread and salted butter was also brought out, both so delicious I could’ve had an entire meal just of these items. The first course was a spectacular foie gras (always a personal favourite), seared with strawberries. The absolute creaminess of the foie gras was divine, and the choice of strawberries as partner in crime was inspired. The fun of a picnic! Caviar, ratatouille and pickled mackerel. Photograph by Belinda McDowall

This was swiftly followed by a picnic – so much fun! – of caviar with pickled mackerel and ratatouille. We were passed bottles of homemade lemonade and a picnic blanket, and were unable to wipe the broad smiles off our faces as we snacked on the roe of the sturgeon and sipped the lemonade. 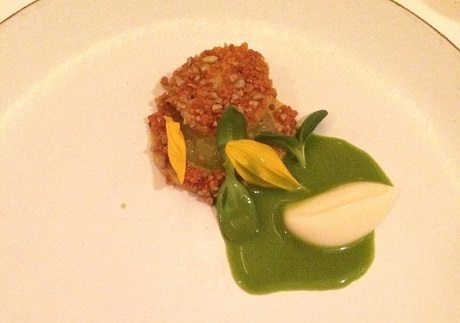 Crumbed and baked sunflower, an intriguing and inspired dish. Photograph by Belinda McDowall

Following this was one of the more unusual dishes of the night, a baked sunflower with green tomato and sunflower crumble. The heart of the sunflower had been crumbed and baked and was unlikely anything I had ever tasted before. It was slightly nut-flavoured, with a beautiful crunch. A spread of lobster, prawns and clams at Eleven Madison Park. Photograph by Belinda McDowall

A seafood spread was the next course and was, quite literally, spread over the table. Our chef appeared by our side and explained the range of fruits de mer on offer, including lobster, prawns, and clams. He then proceeded to throw the contents of the pot over the table – thankfully onto brown paper, which had been placed there beforehand.

I was momentarily concerned my Marc Jacobs dress would be splashed with remnants of crustacean, but not to worry, we were in expert hands. The chef’s aim was impeccable, much the same as his cooking skills. The seafood was seasoned, cooked to perfection. Turf followed surf, as a beautifully cooked dry-aged ribeye arrived, accompanied by delicate eggplant, and one by one a succession of vegetable side dishes, including a corn custard with garlic and lime, and a roasted and compression tomato.

This was followed by a Hudson Valley Camembert with plum and Basil. The first of the desserts (a truly great degustation menu always provides two desserts, at the very least) was a wonderful plum, grilled with ricotta ice cream and oats.

Baked or grilled stone fruits are always a favourite of mine – they taste divine, and manage to make one feel like one is eating healthily. And the final course was ‘Name That Milk’ Chocolate, a fun game involving four bars of chocolate, all from different animals.

Unfortunately, neither my husband nor I got the answers correct, so we decided then and there we would have to visit again to give it another go.

And rounding out the night we were given a nightcap of a deliciously strong St George Apple Brandy, made especially for Eleven Madison Park. To round out the evening, a nightcap of St George Apple Brandy, specially made for Eleven Madison Park. Photograph by Belinda McDowall

We left the restaurant at around 10.30pm, after a 5-hour meal – we would have stayed longer but we had an early flight to catch.

The service had been flawless, the food was heavenly, and the whole experience was out of this world.

It was a truly perfect finale for our stay in New York, and truly worthy of the crowning of Eleven Madison Park as Best Restaurant in the World for 2017.

The New York City Skyline, as captured from Brooklyn. Photograph by Belinda McDowall

At the beginning of the BBC One TV Series 4, Episode 3 of POLDARK, Ross Poldark (Aidan Turner) arrives in London town to take his place in the House of Commons