Actress Jennifer Jones as Elizabeth Barrett in the Barrett’s of Wimpole Street, 1957

The nineteenth century in England, Europe and America was a period of extraordinary change, one of the greatest productive epochs of imaginative literature ever; poetry, novels, essays, diaries, confessions, letters and memoirs poured profusely from printing presses.

In London people were seeking to break free at this time from the narrow-minded social conventions of their day. They wanted to explore a daringly different bohemian lifestyle.

What love is, and is not, and what beauty is all about became a central focus. At the forefront of change the aesthetes created a Cult of Beauty.

Oh, Italia, ‘thou hast the fatal gift of beauty…the orphans of the heart must turn to thee wrote their colleague, Lord Byron.

Many of the orphans of the heart went to Italy, including Elizabeth Barrett and Robert Browning.

The story of the famous meeting, courtship and subsequent marriage in 12th September 1846, between England’s prominent and much loved poet Elizabeth Barrett (1806-1861) and highly regarded poet Robert Browning (1812 – 1889), became one of the era’s most famous love stories. They were both in their own right, literary giants of 19th century Victorian England. Her Poems were published in two volumes in 1844 to great critical acclaim.

Prior to its publication Robert Browning’s ‘Dramatic Lyrics’ (1842) had gained Elizabeth Barrett’s attention and she had admired his book from afar.

In Poems her ‘Cry of the Children’ revealed a passionate concern for human rights. She also expressed her personal delight and the high esteem in which she held Browning’s work in ‘Lady Geraldine’s Courtship’.

There, obedient to her praying, did I read aloud the poems
Made to Tuscan flutes, or instruments more various of our own;
Read the pastoral parts of Spenser — or the subtle interflowing’s
Found in Petrarch’s sonnets — here’s the book — the leaf is folded down!

Or at times a modern volume, — Wordsworth’s solemn-thoughted idyll,
Howitt’s ballad-verse, or Tennyson’s enchanted reverie —
Or from Browning some ‘Pomegranate,’ which, if cut deep down the middle,
Shows a heart within blood-tinctured, of a veined humanity*

Critics reviewing Poems praised her intellectual power, originality, and boldness of thought. From being a promising young poet Elizabeth Barret became an international celebrity on both sides of the Atlantic and was acclaimed as one of England’s great living poets.

“I love your verses with all my heart, dear Miss Barrett …” is the start of the first love letter to 19th-century poet Elizabeth Barrett from her future husband, fellow poet Robert Browning. There are some 573 love letters that exist, which capture their courtship, their blossoming love and their forbidden marriage. They have long fascinated scholars and poetry fans and can only be seen only at Wellesley College, Mass in America, where the collection has been since 1930.

How do I love thee? Let me count the ways’ *… Elizabeth wrote in her now famous ‘Sonnets of the Portuguese’, 44 love sonnets published in 1850, four years after they were married and living in Florence. The Romantic poets of the 19th century cultivated individualism. They revealed their reverence for the natural world, championing the tenets of idealism, producing poems seething with physical and emotional passion, and showing their curious interest in both the mystic and supernatural.

They were first given impetus in their endeavours by Scottish author Sir Walter Scott (1771-1832). His stunning series The Waverly Novels had an extraordinary effect on a bourgeoning middle class society, both at home and abroad as they gradually burst upon an astonished world between 1814 -1832. Their effects would be ongoing and felt for well over a century. His rousing tales fuelled the huge revival of interest in the ancient past, which had been growing slowly since the middle of the eighteenth century in the cradle of the aristocracy.

They ensured young women would thrill to the thought of faithful lovers coming to rescue them and also spur young men on to producing romantic gestures and dashing deeds in both love and war.

Painters, sculptors, writers and poets took up the gauntlet. Instead of waging war in foreign lands their imaginary knights battled affairs of the heart on canvas or on the pages of books instead.

It was really all about arousing society, challenging it to examine its social conscience.

This was desperately needed in the wake of the industrial revolution, where the abject misery of poverty and shocking conditions, especially for children in work places, meant that all-new societal values needed to be established.

The beauty of Barrett and Browning’s love was an important aspect of their era as men and women looked romantically to the past, especially to the Middle Ages. This was when the Latin word Romanz was first used to describe captivating themes of love, ladies and passion.

Well-known critic John Wilson (“Christopher North”) declared there was ‘beauty in all the poems of Elizabeth Barrett and that some were “altogether beautiful and she contributed greatly to Victorian ideas about medievalism through her work.

‘Judge no more what ladies do’ she pleaded.

Romantic literature expanded its appeal to the burgeoning bourgeoisie. It was all about expressing personal feelings in relation to a love of beauty, chivalry and ideas of ‘courtly’ love, which were revisited avidly at this time.

Courtly love had been all about declarations of service, devotion, and passion and, an emerging sense of the self, ideas now integrated with others to become a defining aspect of Victorian culture.

Just as a courtly love song had been sung by a languishing lover to the sole mistress of his heart, so were Robert Browning’s thoughts and poems filled with his love for Elizabeth Barrett, especially after they finally met in the house she lived with her family at 50 Wimpole Street, London.

Buoyed by her love for him she had learned to walk again over the months since they had met and enjoyed each other’s company, mostly while her father was at his work. When he found out he disapproved heartily of her happiness and did everything to destroy it. Browning had to cleverly liberate her from the stifling atmosphere in which she lived, imprisoned and ruled over by her father with a rod of iron.

He had a twisted sense of duty and forbade any of his daughters and sons to love, to marry or to leave his household with the threat of cutting them off without a penny from his considerable fortune.

Those who did leave, like Elizabeth, were. Her leaving was engineered by Browning, who found the obsessive nature, cruelty and bullying nature of her father’s ministrations towards her nothing to do with love.

On Sept. 18, 1846, shortly before their marriage he wrote to her and said: “God bless and strengthen you, my ever dearest dearest … Write to me one word more – depend on me …”

Following an unsavoury encounter with her father the night before she and Browning were going to flee and marry secretly, she fled the house with her maid and dog Flush. Robert and Elizabeth were married and he whisked her away to Italy for the rest of their life together. Both her piety and love of music are frequently cited as important influences on Browning’s further development as a poet.

The re-occurring ill health Elizabeth Barret suffered following a fall from her horse aged fifteen years came to an end after only spending 11 year together.

But not their love, which her husband declared would last in his heart forever.

He imagined a scene for Elizabeth’s final resting place that was inspired by the classical world. It was one of order and plenty, designed to evoke a true sense of beauty, which was what the Barrett-Browning love story was really all about.

… ‘I love thee with the breath,? smiles, tears, of all my life!—and, if God choose,? I shall but love thee better after death’* 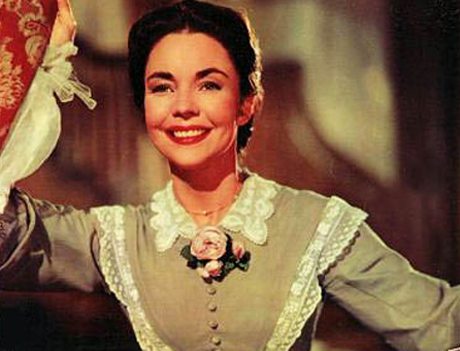 The story of their love was told publicly on stage in The Barretts of Wimpole Street, a play written in 1930 by Rudolf Besier. Starring Actress Katharine Cornell who made the role her own, it was first staged in Cleveland Ohio in 1931 and was such a success it went to Broadway.

It became a black and white film in 1934 with Frederick March, Norma Shearer and Charles Laughton. Then it was virtually-revived and shot almost scene for scene in colour, by the man who directed the first film as well, Sidney Franklin

A Television series of the Barretts of Wimpole Street made in the early 80’s seems to have been all but lost, so perhaps its time for a re-make.

So, in the like name of that love of ours,
Take back these thoughts which here unfolded too,
And which on warm and cold days I withdrew
From my heart’s ground.
Indeed, those beds and bowers
Be overgrown with bitter weeds and rue,
And wait thy weeding; yet here’s eglantine,
Here’s ivy!—take them, as I used to do
Thy flowers, and keep them where they shall not pine.
Instruct thine eyes to keep their colours true,
And tell thy soul, their roots are left in mine**.

Michael Keaton plays American businessman and philanthropist Ray Kroc who calls himself The Founder of McDonald’s. Is that the truth behind those golden arches?