Elizabeth Murray was in New York recently for the launch of the exhibition Monet’s Garden at The New York Botanical Garden where her photographs form part of the display and are on show in the Ross Gallery.

While she was there she also spoke at Eastman House about the time she spent at Monet’s Garden in France at Giverny, which she helped to restore and has extensively photographed over the 25 + years since, traveling overseas annually to visit its loveliness. 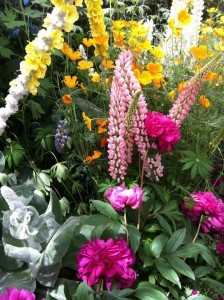 Claude Monet left a great legacy. He spent much of his life creating lasting impressions in his now famous garden at Giverny, which fell into disrepair during World War II and remained that way for many years. It was finally rescued and in 1985 the Conservator of the Museé Claude Monet, M. Gérald van der Kemp invited Elizabeth to live and work in the gardens to help with the restoration that was already underway. Daily for nine months she enriched her mind, heart and soul as she interacted with the garden, the gardeners, the villagers and the visitors.

Elizabeth spent hour after hour digging in Monet’s earth and walking in Monet’s footsteps while gaining an insight and understanding about the man, the artist, his life, his craft and his passion for gardening, something they both share. It has inspired her dedication to diverse projects around the world, from Monet’s Gardens in Giverny  to remote African villages, the Amazon rain forest and the gardens of Japan. Monet used a variety of sources and resources to inspire his own ideas for planting his garden.

It was at the World’s Fair in Paris held in 1889 when Monet discovered the recently hybradized water lilies brought to fruition by a prominent horticulturalist of his day Joseph Bory Latour-Marliac (1830 – 1911).

Latour-Marliac had in his turn been inspired to take on the task of hyradisation by an article written by Charles Antoine Lemaire, “Nymphaea Devoniensis”, which appeared in the Belgian publication Le Jardin Fleuriste in 1854. He worked on the Nymphaeas for some 40 years. In his paper Hardy Hybrid Water Lilies (The Garden 1899), Latour-Marliac himself described 34 “quite distinct varieties” with the promise of more to come.

Today we attribute more than 110 cultivars to his efforts.

Monet was particularly partial to the deep pink Nymphaea ‘James Brydon’ and the yellow Nymphaea ‘Mexicana’. Every winter he would remove them from the pond as a measure against severe northern winters and then replace them each spring.

His gardeners, when they were in situ, would row out onto the pond daily to dunk the lily pads and refresh them with pond water so that they would glisten in the sunshine. In this way his painterly eye would catch their magic on his canvas in the best possible light. At New York starting in July, Monet’s most famous subjects, water lilies, many of them the varieties he grew, will be featured in the Conservatory Courtyard Pools.

Until then Elizabeth Murray’s Photographs of them will serve the purpose of informing visitors.

Monet’s flower garden changed with the seasons, as it will in New York throughout the exhibition. The gardeners have all been working for months in the hot houses carefully tending the huge variety of colourful plants to go on display, timing their flowering periods to perfection.

Monet was 50 when he took on the task of transforming the well used vegetable patches and fruit trees in the garden of the house he had finally purchased at Giverny in 1890, having rented it for some years.

He also purchased land adjacent to it and converted that into his now famous water garden where the willows gracefully wave in the breezes and frame the loveliness of his water lilies when they are in bloom.

Elizabeth Murray is today still inspired by the ideas and insights from Monet’s amazing painter’s gardens and holds regular workshops in her own ‘Artists Studio’ sanctuary at Monterey in California.

You can purchase Elizabeth Murray’s book Monet’s Passion at www.bookoffers.com.au

Watch the Video of Elizabeth’s Talk at Eastman House

This stunning tribute to French Impressionist Claude Monet showcases a seasonally changing interpretation of the garden that inspired his art. In addition, two rarely seen paintings by the artist will be on view, and films, concerts, poetry readings, and hands-on art for kids will provide rich insight into the life and work of this renowned master.

Watch the Video of Setting Up Monet’s Garden

Take a peek behind the scenes with Karen Daubmann, Director of Exhibitions and Seasonal Displays, as the staff inside the Enid A. Haupt Conservatory put together Monet’s Garden. This exhibition explores the legacy of his idyllic garden at Giverny, France, transforming the Enid A. Haupt Conservatory into a floral masterpiece of diverse plants, bold colors, and dramatic design.