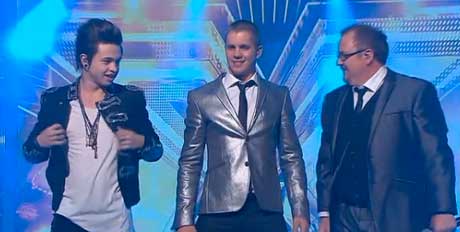 Let’s make a beautiful world
Take my hand, it’s alright
Cuz tonight, we can fly
So we keep living, cause the feel’s right
And it’s so nice, and I’d do it all again
This time, it’s forever
It gets better, and I – I like how it feels#

It always comes down to three. The unity of body, mind and spirit is found symbolically in history everywhere and sometimes in the most unlikely of places. It’s part of The Code programmed into our DNA, the sign of the trinity; the symbol of the past, present and future all embodied in the ring of eternity, which is bound symbolically in a circle of culture around the world. 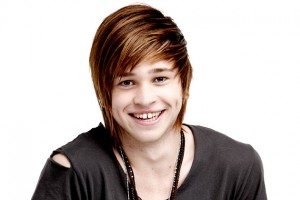 This time of year provides us all with some time to reflect, to reduce stress, to improve concentration and co-ordination and, to find a way forward to both good health and inner well-being by embracing the X factor, the message of the Christmas season revealed in the making of marvellous music. On the Australian X Factor Final in 2011 it all came down to three competitors singing ‘I like how it feels’ a song by Enrique Inglesias, full of passion performed brilliantly by: Reece Mastin, Johnny Ruffo and Andrew Wishart.

Modern culture, through its music is wanting to show the youth of today about making a beautiful world. Feeling the love has become an important aspect of musical talent programs everywhere. All the contestants, as the show progresses, have to learn how to respect each other and work together, despite being in competition for the grand prize.

It is a great metaphor for how cultures must connect to ensure that we can all feel the love and experience the message of Christmas first hand. These three learned well how to work together, how to support each other’s weaknesses as well as how to admire each other’s strengths.  As they did, we really all need to ‘like how it feels’ as well. Perhaps we should all take on board Astor Piazzolla’s The Song of the Angel this Christmas, recently recorded by the Australian Chamber Orchestra. Music we know feeds the spirit and the soul. Angels are not ordinary people, although they are an essential part of the religious and spiritual beliefs of many people from all cultures and backgrounds. Seen as pure spirits, they are believed by many to be intermediaries between God and man. Accordingly they have predicted, proclaimed and participated in world changing events. Their original image without wings is all about attending to duties on earth, but they have wings when they are to perform heavenly tasks.

Angels its seems have no free will, but can only do what God orders them to do. Some of their tasks include testing individuals by tempting them with gifts of gold and wealth, which is also about teaching them to give without wanting to receive – the important message of Christmas, the magical song that they all want to sing.

Nowadays we have the best of all worlds in music.  First there is ‘classic’, or music generally considered of the highest quality or lasting value, a benchmark standard if you like, simple, restrained and refined in style, always fashionable and conforming to generally accepted principles or methods. Second is ‘rock and roll’ (and its offshoot, rap music), popular music which had its roots in American blues, a genre known as Jazz, that exploded during the 1960’s into a world no longer a series of states, or political divide, but one on the way to becoming ‘global’. And, finally folk music, passed down through a community emerging out of traditional beliefs or the ideas of its culture and peoples.

*During the first century Roman Emperor Caesar Augustus issued a decree that a census, (an official count of all the people in the population) should be taken of the entire Roman world.  And everyone went to his own town to register. A man called Joseph went up from the town of Nazareth in Galilee to Judea, to Bethlehem …with Mary, the woman who was pledged to be married to him and, was expecting a child.  While they were there, the time came for the baby to be born, and she gave birth to her firstborn, a son. She gave him the name Jesus, which means the LORD saves, and it was said ‘he will save his people from their sins.’ She wrapped him in cloth and placed him in a manger, (the trough from which all the animals ate) because there was no room for them in the inn.  And there were shepherds living out in the fields nearby, keeping watch over their flocks at night. An angel of the Lord appeared to them, and the glory of the Lord shone around them, and they were terrified. Neapolitan angels, cherubs, and crèche pieces in the Metropoliltan Museum of New York's collection date from the eighteenth century when, under the rule of Charles III of Bourbon, Naples’s most gifted sculptors began creating magnificent devotional figures

But the angel said to them, “Do not be afraid. I bring you good news of great joy that will be for all the people. Today in the town of David a Saviour has been born to you; he is Christ (A Greek word meaning the Anointed One) the Lord. This will be a sign to you: you will find a baby wrapped in cloths and lying in a manger.”  Suddenly a great company of the heavenly host appeared with the angel, praising God and saying, “Glory to God in the highest and on earth peace to men on whom his favour rests.” When the angels had left them and gone into heaven, the shepherds said to one another, “Let’s go to Bethlehem and see this thing that has happened, which the Lord has told us about.”*

**They came from the east …and the star they had seen in the eastern sky went ahead of them until it stopped over the place where the child was. On coming to the house, they saw the child with his mother Mary, and bowed down and worshiped him. They opened their treasures and presented him with gifts of gold incense and of myrrh. These were the first Christmas gifts. They represent the three roles Jesus was to fill as Messiah: His kingly office – gold; his divinity, or priestly office – frankincense; his manhood – myrrh, a precious oil often worn around the neck in a small bag as a talisman and used to anoint bodies at death. The Three Wise Men are sometimes known as the Three Kings from the East. They did not arrive to see the child of God for themselves until thirteen days after the winter solstice in the northern hemisphere, the day when the earth is the furthest from the sun; the 6th January. This day of celebration is the feast of Epiphany, when all the angels and humans join together and reach out to all around them to sing** 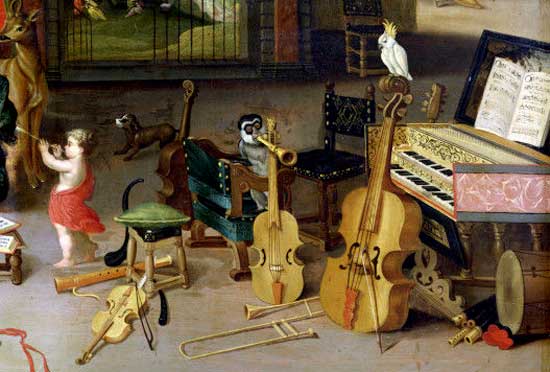 The relationship between music, the landscape and architecture in the ancient world was about achieving clarity, temperance and moderation, qualities and values admired at the time. However there is evidence to suggest music, in both ancient Greece and Rome also embraced opposing forces: setting a mood of serenity or sensuousness; heralding the distress of war; rejoicing in the elation that accompanied a triumph; the excesses surrounding the ecstatic state or, applauding elegance.

Angels only have one song to sing and as the plainchant of the early Middle Ages gave way to a rich inheritance of ballads and madrigals celebrating courtly love and poetic notions of goodness the song of angels also began to change. During the splendour and brilliance of the Renaissance court music grew, changed shape to define, enrich and ennoble social life. Different styles of music developed as instruments, and their sound improved by refining range, tone and pitch.

It was during the seventeenth century encouraged in part by the opening up world exploration, the birth of the sciences and the mood of absolutism at the court of the French King Louis XIV where the addition of drama and dance to musical experiences became part of the impetus for global change. From the archiepiscopal city of Salzburg to the imperial court at Vienna, from the northern reformers to the English eccentrics,  American and Australian colonists in the eighteenth and nineteenth centuries the western world went mad for music. During the 20th century the spirit of its people after violent global conflicts, gradually reinstated a love of life cherished by the ancients, one always expressed through the magic of its music making. Now in the first decade of the 21st century music remains an integral part of our global society and way of life. Hey Kid said Kylie Minogue to Reece Mastin, winner of the X Factor 2011 - do you like how it feels?

Let’s make a beautiful world
Take my hand, it’s alright
Cuz tonight, we can fly
So we keep living, cause the feel’s right
And it’s so nice, and I’d do it all again
This time, it’s forever
It gets better, and I I, I like how it feels#

The X factor has gone global, proving that the message of Christmas is all about caring for each other in community and about sharing the love around through the magic of music. Feel the love and, have a happy festive season.

The legendary King of Albion, the oldest name for Britain, is about to feature in the Warner Bros movie King Arthur: Legend of the Sword directed by Guy Ritchie