Emily McGregor utilises diverse media, and her exhibition Morphogenesis is harmoniously located at the Incinerator Art Space in Sydney until September 25, 2016.

Her artworks resonate within the structure, form and history of the iconic Burley-Griffin designed Willoughby Incinerator. The concept of preservation and change so evident in the transformation of the Incinerator to an Art Space is also echoed expressively and diversely in Emily’s artworks.

This profoundly varied exhibition provokes reflection, incites a measured calm and notates movement with an artist’s eye and a sculptor’s vision. In SDC PPY JM, 2016, Emily’s fascination with movement has been explored through the concentrated observation of dance and recording the patterns of movement.

Emily’s artistic practice for this work was in the place of origin, the dance rehearsal space, into which she carried her box of drawing materials.

She selected a dancer’s body part and followed that part through the dance sequence drawing different lines for different dancers and different sequences.

In this focused situation she gave absolute attention to the act of creation. She believes immersing herself totally in the attention of observational composition is an active form of meditation.

Emily has explored a distinctive method of expression through her artistic conception and structural composition.

The wisps of change and the swirls of conversion are underpinned by tangerine and yellow mists that add a metallic glow and rich depth to this artwork. The fluidity of the work is strengthened by an area of liquid blue stillness.

Her strokes of charcoal give a rhythm and beauty to this work that is reminiscent of Chinese ink drawings. Expressions of shade, texture, line and form reveal the outer representation of movement but are imbued with an inner inventive quality of discovery and connection.

The lines create a rhythmic balance that is given depth by the skilful poised application of light and shade. The density and textural nuances of the black tracks and merging smoky hues orchestrate the tempo and pulse of movement within the composition. 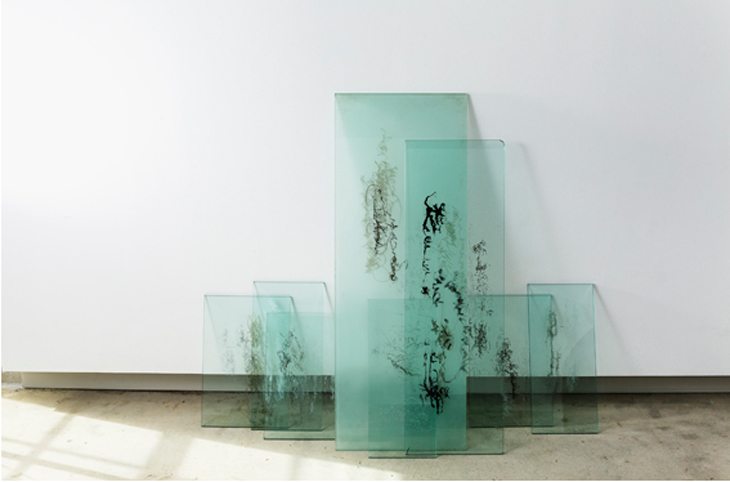 Sirenssound, 2015/16, is an artwork of eight glass panels inspired by studying the movements of the fusion of contemporary and classical Indian dance performed by the Sirens Dance Company.

The markings on these glass panels graph the ethereal qualities of thought and movement. They document the grace of a single action as it merges into a series of changes.

The glass allows the play of light and transparency to dance and travel like shadows cast by multiple actions.

The markings are etched with the seasoned certainty evident in all of the works in this exhibition. The lines vaporize and materialize with gestures suggesting the antiquity of time and fragility of relics.

These subtle glass panels define the intensity of slow motion and the patterns create a soothing and delicate visual language for the process of thought and movement.

The absence of markings leaves empty spaces in sections of the glass panels. This technique sensitively and circumspectly produces the inherent rhythm of this fragile yet very persuasive work.

The three light box works are sculptural, textural configurations of change where the light emitting source draws the eye into a sustained focus.

The sensual sweep in one work captures the beauty of curves and the lit cracks in the white clay that meander gently across the work. They have the same resonance as the drawn lines in her pictorial exhibits. The light is the line and the line is the light in this beautifully rich and deep representation of the waves of changing energy.

In another light box the white clay crust is gnarled and the lit cracked lines illustrate the sparks of wonder and quivering character of shifting landscapes. In the third light box the circular cycle of illuminated movement invites the viewer to reach beyond the realm of the surface and explore within.

In Emily’s residency with the Sydney Dance Company she was able to work with dancers Angela Hamilton, Gideon Archdall and Paul Walker to create Bodyground, 2016, single digital video, colour and sound lasting 10:22 minutes.

These dancers performed on her damp clay grid and the juxtaposition of dancing bodies in film and a sculptural landscape is a fine example of the paired synthesis of art and dance.

The softness of the shadowy changes in form and shape of dance positions in the video connect with the fluctuating panorama of the gently undulating individual white tiles in Somascape, 2016.

Space is investigated in the multi-dimensional array of the solid horizontal forms of the clay grid integrating with the dancer’s opaque figures as they intertwine and unfurl on the vertical screen. On first viewing there is a dichotomy in the exhibition, Phytogenesis, 2016, however closer observation attests this work pivotal in connecting the diverse origins and concepts that abound within the exhibition.

Emily does not need viewers to ‘read’ her artworks in a predetermined way. Confidence, authenticity and integrity in her method of communicating visually and sculpturally document a record that affirms individual interpretation.

She has mapped a structure that is a sculptural response to her intuitive creative understanding and her aesthetic philosophical beliefs.

The suspended solid glass tubes hang from a wire mesh platform. In contrast, the grounded vertical steel is coiled in rope and rises from an aged steel grid within the whole grid.

This artwork is a powerful intellectual construction that captures the process of her thought in abstraction. Its precision, clarity, stability and balance are the qualities of constructivism.

Her work is fluent in the combination and placement of the rigidity of contemporary materials like borosilicate glass and stainless steel with the organic and traditional material of ropes. In this exhibition Emily McGregor has given equal significance to the pictorial and sculpture images of a narrative of observations of change, the symphony of dance and the focus of attention that allows for life’s surprises.