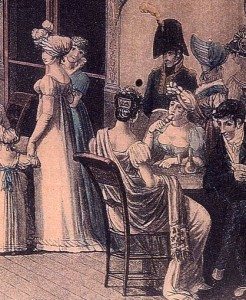 The French revolution in 1796 rocked upper class foundations in both Europe and England. A directory ruled France and the dashing Corsican General Napoleon Bonaparte became Commander in Chief. His victories on the battlefield were to shape chair styles no less than the themes of Grand Opera. Chairs lost their foppish curves and became monumental, strong for straight backed soldiers to sit on. The fashionable gathered at Frascati’s where styles echoed a desire to be an integral part of a classical scene as they enjoyed their ices. Napoleon and his wife Marie-Joseph-Rose, who he renamed Josephine, became Emperor and Empress of France. An irresistible combination they were a potent inspiration to every type of artist and opportunists of their day. The Empire style they cultivated put society before the individual. Across all the arts, architecture, interior decoration, the opera, drama and literature there is a discernible mood of honour, patriotism, courage, self-denial, friendship and family.

Album 1 of Slava Grigoryan’s The Cello Suites spent a record 13 weeks at #1 on the ARIA Classics Chart and Album II, released on November 3, is much anticipated