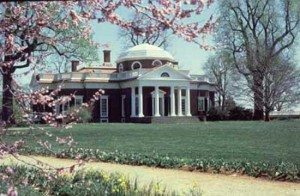 Noted English architectural historian the late great Sir John Summerson (1904 – 1992) described English Palladianism, as it has become known, as ‘that balanced combination of the useful and the beautiful, or prosperity and good breeding’. What it did do was satisfy the need for a style that encompassed the principles of order and harmony with elegance and a lightness of touch so that the end result was a style that was aesthetically very pleasing. English Palladianism became highly influential in America through the support it received from American President Thomas Jefferson. He pursued his passion for knowledge of the classical style and, at his house Monticello it reigned supreme, at least until the advent of a new style produced by architect, interior designer, writer, educator and all around genius Frank Lloyd Wright (1867 – 1959) with the arrival of Modernism, late in the nineteenth century.