Business, you know, may bring you money, but friendship hardly ever does* For many people who undertake the restoration of old houses, the house itself seems to swallow up most of their, and probably some of the bank manager’s resources. It was certainly so in our case, leaving us all but bereft of funds for furnishing. We did have, however, two inestimable advantages. In the early 1950’s in England it was still possible to find suitable furniture for a Georgian house at what now seem ludicrously small sums of money, particularly if one sought out furniture that was unfashionable.

Our second great advantage was in having renowned English designer John Fowler (Colefax & Fowler) as our friend and mentor. It was through him that we came to appreciate the delights of painted furniture at a time, when it was possible both to find and afford it. The ubiquitous stripper with his tank of caustic soda had not yet appeared on the scene to destroy the charming decoration (and consequently the intrinsic value) of much painted furniture. This profitable exercise catered for the highly fashionable country cottage look of stripped pine. 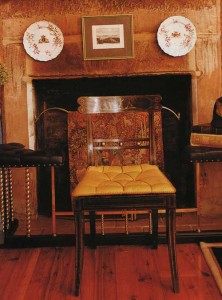 We have to concede that a great deal of furniture that was immersed in the stripper’s’ tanks had already been repainted or. had reached a state beyond which it was possible to make out enough of the decorative details to be able to carry out an authentic restoration. Nevertheless, great quantities of delightful painted decoration were destroyed from the 1960’s onward.

It is ironic that in the search for the country cottage style, painted decoration that was destroyed in the process, was the very fashion that had graced another period when the whole country cottage image was so popular. Indeed much painted furniture was designed for the modest Regency houses that the romantic era persisted in referring to as ‘cottages’.

Painted furniture however, was not limited only to the smaller houses; it was to be found in grander houses. 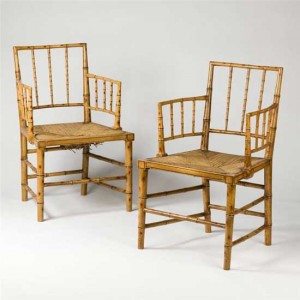 As it happened, the first pieces of painted furniture I bought were originally in the servant’s rooms of two great houses in East Anglia.

A set of chairs simulated to look like bamboo came from the housekeeper’s room in Blickling Hall in Norfolk. Another set came from the huge and eccentric mansion that the equally eccentric Earl of Bristol built for himself at Ickworth in Suffolk around 1800.

I have always assumed that the mirrors, like the chairs, came from the rooms of upper servants, however this may not be the case, as some years later I bought six beds from a ‘servant’s dormitory in a home in the west of England.

These beds were quite elaborately decorated, the cast iron bars of head and foot being painted to simulate bamboo with the finials and patera in brass. Much of the charm of these pieces lies in the rather primitive way the decoration has been thought out and executed.

The trophy of musical instruments on the Blickling chair is crudely painted in comparison with the similar, but more elaborate, trophy on the skirt of a card table attributed to Hugh and John Finlay, the Baltimore cabinetmakers, and made in the first decade of the nineteenth century. The bamboo on the Ickworth toilet mirrors is again crudely hinted at in comparison with many examples of very sophisticated, simulated bamboo pieces, which were destined for more important rooms.

These humble examples of painted furniture were made around 1810 and indicate the range of its popularity by that date, popularity largely due to two key figures, the Prince Regent and Thomas Hope. The Prince Regent, whatever his failings as a man and a Prince, was a notable patron of the arts.

He collected widely and spent lavishly – his penchant for the French taste being indulged by the purchase of much furniture from the Royal collections dispersed after the French Revolution – and there is no doubt that his Catholic interests had a profound effect on contemporary tastes of the nineteenth century. 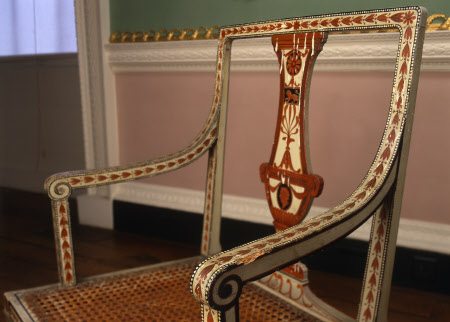 The French taste for white and gilt furniture was prevalent throughout the latter half of the C18 and this theme was copied by the neo-classicists from English architect Robert Adam onward. But, the neo-classical style fed by the interests in the new discoveries at Pompeii and Herculaneum was by now becoming academic in approach. Not only the shapes of the furniture were greatly influenced – for instance in the use of animal forms as supports for tables and chairs – but also the colours and decoration used for painted furniture.

Thomas Hope is one of the most famous names connected with the classical movement. His “Household Furniture and Decoration” published in 1807 exerted an enormous influence on contemporary taste. This book was based on the decoration of his own house in London, which was designed to provide a suitable background for his Greek, Roman and Egyptian antiquities.

An account of just one room, the Egyptian or Black Room – gives some idea of this remarkable house. It had “ornaments from scrolls of papyrus and mummy cases, the furniture and ornament, which was yellow and bluish green relieved by masses of ‘Black and Gold’. 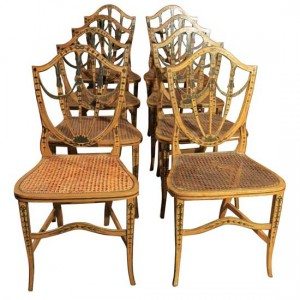 This Regency style based upon the academic study of classical architecture and influenced by the fashions of the French Empire was ideally suited to the taste for painted furniture.

The rather flat, two dimensional quality of decoration on Greek vases, the stylized motifs of honeysuckle, acanthus leaves and palm leaves and the use of thin lines and fret or key patterns for borders were easy to adapt for use on painted furniture, and the ‘Pompeian’ and ‘Etruscan’ colours of red, black, brown and cream produced a truly striking effect.

This kind of painted furniture was generally designed to create a special decorative effect and frequently made use of the skill of ‘Marbleizing’ table and cabinet tops to give an even more classical look. Black and Bronze seem to have been the favourite base colours, with decoration in gilt or, sometimes, straw colour or red. Chairs of the ‘Trafalgar’ type were often painted black, with an oval inset in the top rail. This would be painted en grisaille on monochrome, and generally depicted classical or Chinese figures in an appropriate landscape.

There was as well a huge vogue for painted or japanned black furniture. Perhaps to provide a foil for the pale natural woods, such as maple and satinwood so beloved by Regency cabinetmakers. Of the highest quality was furniture made from exotic timbers and inlaid with brass by the most influential of master craftsman George Bullock (1777 - 1818) - reproduced courtesy Martyn Cook, Sydney

The other enormously popular timber was rosewood, and the very distinctive graining and streaking lent itself well to imitation in paint. In fact, there was a definite taste for these kinds of jazzy woods with very strong graining such as Zebrawood and Calamander. The fact that they were very expensive, itself gave impetus to the painted imitations.

They reached an incredibly high standard, high quality in exotic woods could be imitated at a fraction of the cost by using beech wood or, for the cheapest furniture, pine which was then painted, grained and gilded to give a very rich effect.

The Regency produced many interesting new forms of furniture – for instance small portable bookcases with stepped shelves – which were well suited to this type of decoration. Much of this falls into the category of what was known as ‘fancy furniture’ – such things as worktables and hanging shelves – much of it in the Chinese taste.

There was also a marked taste for the Gothic: the charming fantasies of both the simulated bamboo and the cottage Gothic of the Regency seemed to be the direct descendant of the taste of the Prime Mininster’s son Horace Walpole at his house Strawberry Hill. In general this furniture was intended for smaller houses or for bedrooms in grander houses and was painted in pale colours, although the taste the black was also evident the use of colours reached a very high degree of sophistication. In particular great care was taken with undercoats for instance that excellent quality of Regency black was generally achieved by the use of green as undercoat.

Bamboo furniture was also generally painted to imitate natural bamboo and the rings and knots are often most skilful. The other popular colour seems to have been a pale mid green with darker markings. This colour, so often and so misleadingly called ‘Adam’s green’ was also popular with the Gothic type of small chairs – the Gothicness generally consisting of the top rail having either cut out or painted in an ogee or pointed arch design, sometimes with trefoils and quatrefoils. 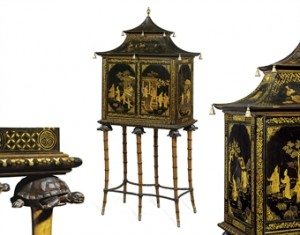 Lesser pieces of furniture such as washstands, side tables and some chests of drawers were often just made of deal and painted. Simulated bamboo was popular here but in these cases there would be no turning and the simulation would be entirely two-dimensional. Other very popular base colours were either a Beige putty or a Grey putty colour, generally decorated in either a clear Green or Blue or occasionally Brown with lines and leafy scrolls, sometimes highlighted with White and shadowed with Grey or Black.

Side tables were frequently lined in a rectangular top, sometimes simple or sometimes carved, the turned legs often had the reverse lotus shape painted half way up a direct copy from the Empire style of decoration.

Another feature of Regency furniture of this type is the use of shadowing to give a stylized effect of light falling from one side only. The lines are painted in light and dark colours side by side, on the right and bottom the light colours will be on the outside, and on the left and top it will be on the inside; or vice versa, thus giving the effect of shadow. Sometimes the tones change place in the middle of the run to give a more illusory effect. Even in its least sophisticated form, Regency painted furniture is full of subtleties and charm.

Alan and Ann Gore (authors History of English Interiors) lectured during the 1990’s frequently about English decorative arts in both England and the USA. Now deceased, Alan Gore was originator and writer of the popular Thames Television Series The English House and The English Garden, the latter narrated by the late Sir John Geilgud.

Ann Gore visited Australia in 1996 and lectured at the NSW State Library on a series relating to the Jane Austen era in England for the Academy of Design and Decorative Arts. The Academy Co-ordinator, Carolyn McDowall, subsequently led three Study Tours through England with Ann and Alan Gore visiting, staying and dining in Country Houses and visiting major Decorative Arts Museums and Galleries. Ann and Alan Gore visited Australia in May 2000 lecturing for the Academy of Design and Decorative Arts at Brisbane and for the David Roche Foundation at Adelaide.

Waterloo at Windsor: 1815 – 2015 will be a new exhibition, mounted by The Royal Collection Trust. Marking the bicentenary of the Battle of Waterloo, it will be held at Windsor Castle from the 31st January 2015 to January 2016. The ‘Waterloo Chamber’ in Windsor Castle was designed to display…