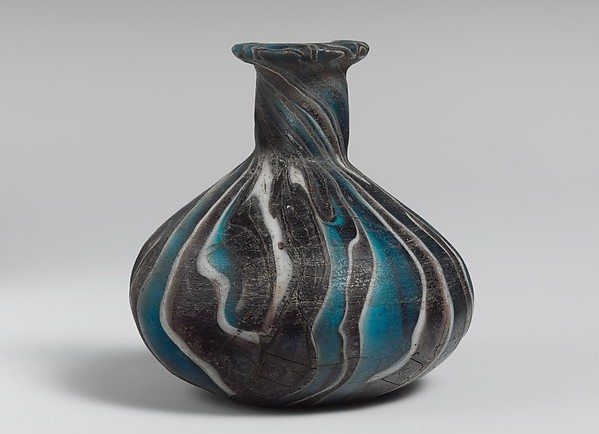 Every morning, a well-to-do Roman lady of the first century would have herself bathed and made-up by her maids before visiting, or being visited by her friends.

The favorite scents of the day were toilet waters, prepared with French lavender, saffron, and crushed rose petals: in the evening, heavier perfumes based on cinnamon and myrrh might be worn.

These perfumes retained the properties of their fragrance because they were stored in brilliantly coloured glass vessels to protect the fragrances from light.

Of all the ‘created things’ in the world perhaps nothing is quite as magical, more marvellous or indeed more enchanting, than glass. The development of the industry has been influenced by technical innovations, historical events, and changes in taste. One-handled jug signed by Ennion, Roman, blown in a four-part mold, 1st half of 1st century A.D. Unknown provenance, but said to have been acquired from a collection near Naples, Italy, courtesy The Corning Museum of Glass, Corning, New York and The Metropolitan Museum of Art, New York – Exhibition Ennion: Master of Roman Glass

The first known glassmaking “manual’ yet discovered dates from seven centuries before the Christ event.

Contained on clay tablets in the library of ancient Assyrian King Ashurbanipal (669-626) BC, instructions on how to make glass stress the necessity to placate the spirits and observe the true ceremony required.

Utilized in a myriad of different forms, facilitating a vast range of decorative techniques to give it the desired finish, glass has dazzled generations of makers and patrons throughout history in different cultures and civilisations.

Because we have no definitive answer as to the real origin of glass, the mystique surrounding it only adds to its romance.

From jewellery to funerary, from weaponry to vanity, from churches to villas and more lately in our own time, for industry, glass and its properties and uses through research are being extended.

Ennion: Master of Roman Glass is an exhibition at The Metropolitan Museum of Art, New York held over the New Year period 2014/2015. The Met Fifth Avenue has among  its holdings what is considered one of the finest collections of this material in the world.

Glass has always been in many ways a luxury item. Roman glass is particularly enigmatic when its beauty is revealed at the hands of master craftsmen and the most outstanding examples of Roman mould-blown glass were made by an artisan craftsman called Ennion. Ennion was very proud of his work. An important aspect of his design was a signature on his mould blown vessels revealing ‘Ennion made me. Let the buyer remember him’.

The Metropolitan brought together many fine examples of ancient glass from some outstanding museums and private collections throughout Europe, Israel, and in the United States. Dr. Shlomo Moussaieff, who had the initial concept for the exhibition, also lent six works. The glassware from this period is primarily jugs and cups. There were some 37 complete or fragmentary vessels in the show, with 24 by Ennion, including the Metropolitan’s three signed pieces.

The diverse selection of works by Ennion found in archaeological excavations on sites as far away as Israel and Spain prove his profound influence on an arising young immature Roman glass industry.

Examples by other signed glassworkers of the period include one of only two intact works by Ennion’s closest rival, Aristeas and there are beakers signed Jason, Neikais, and Meges. Hexagonal flask (amphoriskos) signed by Ennion, Roman, blown in a four-part mold, 1st half of 1st century A.D. Said to be from Potamia, near Golgoi, Cyprus, Gift of Henry G. Marquand, 1881 (New York), courtesy The Metropolitan Museum of Art

Fused from select materials, crushed, mixed and heated for a long period of time at high temperatures, the resultant translucency of glass refracts light dazzling in its brilliance.

Its invention somewhere in Mesopotamia (present day Iraq and Syria) was all about small objects for a thousand years, until hollow vessels appeared around 1500 years before the Christ event.

Asiatic methods of core-forming were introduced to Egypt by Pharaoh Tuthmosis III (c1504-1450BC) although it was not until the reign of Amenhotep II (1450-1425BC) objects were produced in larger quantities.

The technique arose early in the first century before Christ in Syria allowing for quantities of identical vessels to be produced.

Two important technical advances in technique were the use of the blowpipe and closed multipart moulds, which happened during the late first century B.C. and early first century A.D., respectively.

A stunning hexagonal flask thought to be from Potamia near Golgoi, Cyprus made during the 1st half of the 1st century AD is signed by Ennion. 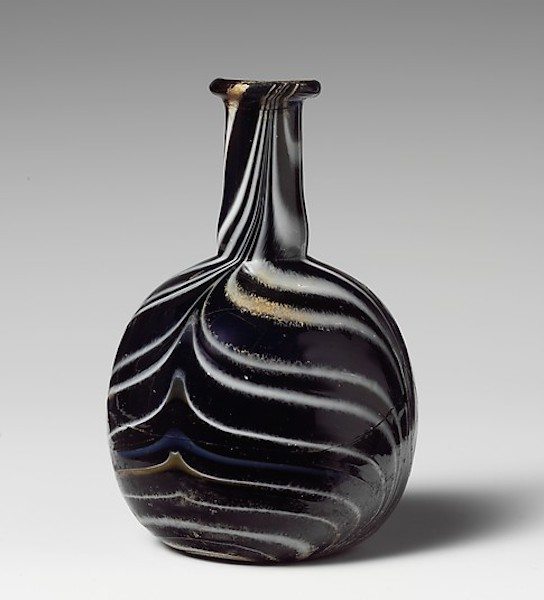 The Romans introduced glass blowing, about 50 BC and dark blue glass became a specialty.

During the reign of Augustus (31BC – 14ACE) Rome emerged as an economically successful city, its population approaching one million people.

Superb glass vessels made by the core method were used for perfumes, and medicines; indeed, the physician Scribonius Largus (active about A.D. 50) insisted that certain medical preparations should only be kept in glass containers.

A more specialized subgroup of mould-made glass was Mosaic Glass. “The normal method of manufacture of this kind of glass consisted of arranging rods or pieces of prefabricated rods of glass in different colors side by side either over or inside a mould, and then heating it until the glass fused together.” (Hayes, 22) The Metropolitan Museum of Art in New York has in its collection a glass mosaic perfume bottle. Made during the 1st half of the 1st century AD it has a striped mosaic pattern of applied trails wound around on a blue ground… they are translucent honey brown, opaque white, opaque light blue and opaque yellow trails.

Dark blue was a desirable colour in ancient times as it imitated the all-embracing midnight night sky and the desired substance Lapis Lazuli, which Egyptian Pharaoh’s used in great quantities.

The best was imported from Afghanistan and flecked with gold. Being able to produce that effect in glass seemed all the more magical.

A portrait head of a woman in The Met New York’s Roman glass collection is imitating rare and valuable lapis lazuli.

She was moulded and carved during the second century AD and is thought to represent the goddess Juno, the consort of Jupiter Capitolinus, who was set up either in a public temple or wealthy private sanctuary.

Changing the colour of glass is a bit like cooking. Everyone can follow a recipe, but true talent comes through when the artisan steps away from the norm and is willing to experiment The skilled workers at Alexandria also produced colourless glass, the last and most difficult, at first, to achieve, as well as gold-leaf glass, gold beaten out to a very thin sheet and sandwiched between layers of protective clear glass.

When colourless glass was invented (through the introduction of manganese oxide) in Alexandria around AD 100 the Romans also began to see its application for architectural purposes.

Glass windows, albeit with poor optical qualities, began to appear in the most important buildings in Rome and the most luxurious villas of the Roman patricians in Campagna.

Methods for decorating blown glass by colouring or cutting were in place by the fourth century mainly in Syria and Egypt when coloured glass was replaced by colourless glass engraved, gilded and enamelled. Changing the colour of glass is a bit like cooking. Everyone can follow a recipe, but true talent happens when the artisan steps away from the norm and is willing to experiment as revealed in this cast glass garland bowl, 1st century BC.