Just as the exhibition Eternal Prague, with its haunting images by Melbourne’s multi award winning photographic artist Joyce Evans is about to open she is herself recovering from a health setback.

Joyce Evans epitomizes, for her many friends and admirers, the spirit of survival that she captures so brilliantly on handmade gelatine silver photographs. Especially those for this powerful show.

It is more than just a historical record, or the careful documentation of a 700-year-old Jewish Cemetery at Prague. It is an all encompassing experience that speaks out strongly about life and death with the power of great art.

The images on show were recorded by Joyce in 1989 when she was visiting Prague. It was just before the so-called Velvet Revolution, when the ruling communist regime collapsed to be replaced by western capitalism.

They take you way beyond the lens of a camera, into a timeless place of great beauty, joy and indescribable quiet and peace. Joyce’s ability to create a connection between the people of a culture that suffered so much is fascinating.

She often used to see what others would not, and her images are all about visual conversations, which human beings all around the world can join into, understand, and be moved by. 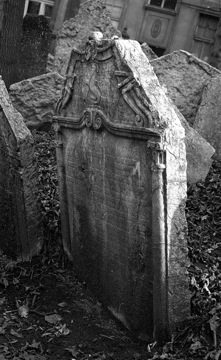 Joyce poses a question that no one it seems can really answer well, or want to with any sort of conviction.

She wants to know why the Germans, who set out to so purposefully annihilate the Jewish people from the earth during World War II, allowed their cemetery, which is in the heart of Prague a city they occupied to survive at all?

Joyce’s own answer is it was because the spirit of the ‘Golem of Prague’ prevailed, and ‘he’ simply would not permit it to happen.

In Hebrew tradition and Jewish folklore the Golem is a mythical being created entirely from inanimate matter. Generally regarded as a ‘he’, the creature appears in the Psalms of David – ancient Hebrew songs, as well as medieval writings.

The Golem has come to the aid of the Jewish people throughout history in their times of trouble and travail, shoring up their spirit and helping them to gain the strength to defeat, or to survive the cruelty of their enemies.

As one of Australia’s national treasures in the world of photography including a being a curator, art collector, and lecturer, Joyce Olga Evans, B.A., Dip. Soc. Stud., (born 1929) has exhibited widely winning numerous awards, including the prestigious Hasselblad Masters.

Passionately dedicated to photography Joyce has had many solo exhibitions of both her landscapes and her portraits throughout Australia and Europe.

She spent ten years of her life documenting Australia for the National Library, which holds over 350 of her images. She has also worked as a lecturer, an approved valuer, an assistant director, a curator and is a Research Fellow at Melbourne University.

Joyce has exhibited extensively in Australia and in France and her photographs are held in collections all over the world. Joyce is a two time recipient of the IAPP Print of the Year Award and has also won the Hassleblad Masters. Her works  have been published extensively and you will find her in the Who’s Who of Australian Women and the World’s Who’s Who of Women.

Her work is held in public and private collections both locally and abroad. Her commitment to photography can be traced back to the Church Street Photographic Centre at Richmond in Melbourne, a specialist photography gallery and bookshop she founded in the mid-1970s.

Through this centre for excellence in the art of photography Joyce was able to support and encourage a whole generation of amazing Australia photographers, one she has continued to give freely to this day. Joyce will be at the opening celebration if you wish to pay your respects to her personally and to view this powerful exhibition.

All images used with the kind permission of the artist, Joyce Evans and Gold Street Studios