Welcome co-producer of Fabergé: A Life of its Own, Alice Ilich, one of world’s leading authorities on Fabergé and Russian art. We thank Alice for facilitating presenting the story behind the making of the award-winning special event film coming to Palace Cinemas on 15 and 16 August 2015 at 1:00 pm about one of the most prestigious names in the history of art, design and craftsmanship, Fabergé.
~~~~~~~~~~~~~

Carl Fabergé propelled the little known jeweller of ‘small items and spectacles’ into a world renowned and iconic brand. He was the descendant of an Huguenot family and founder and through brilliant business acumen turned the firm into one of the leading purveyors to the Russian Imperial Family.

The name Fabergé resonated across Europe and America as one of the greatest creative jewellers and goldsmiths. His patient restoration of early gold and enamel items in the Hermitage for over a decade gave him exposure to some of the great masterpieces made by the leading goldsmiths and jewellers throughout the world. His creations ultimately won him the attention of the Imperial family.

The documentary, Fabergé A Life of Its Own tells the history of this iconic name.

Carl Fabergé took over his father’s small business and developed it into one of the world’s most sophisticated business structures of the 19th Century. 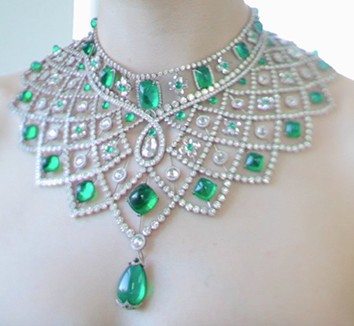 It still holds enchantment in the very pronunciation of its name. However, to achieve that acme he masterminded a business structure that surpassed anything of the time.

Carl Fabergé housed his creative teams, their independent companies and employees under one roof, producing the full gamut of jewellery, guillochage, enamelling, gold and silver-smithing, with all of the supporting staff amenities including their own house doctor and dining facilities. This was the state of the art for Europe.

The big break came when they won the patronage of the Imperial family. The movie focuses on the rise to prominence and success of the business globally as a result of this patronage and its connections to all the noble houses of Europe and England.

However, above all, its achievements were due to the firm’s ability to create an extraordinary array of stunning daily functional articles such as gold cigarette cases, bell-pushes, thermometers, enamelled photograph frames, jewellery and silver flatware at one end and the famed almost mythical Imperial Eggs at the other. Patrick Mark Director, Fabergé: A Life of Its Own

The story continues, paralleling Fabergé’s trajectory and its ultimate collapse with archival footage from glorious Imperial Russia to its utter demise at the end of Word War I and the Bolshevik Revolution. Out of ashes of its destruction, the Fabergé name, as well as the items it created, arise as various entrepreneurs recognise the talismanic attraction these pieces hold, evoking romance, tragedy and above all the magnetic draw of the plight of Russia’s beguiling Imperial family.

It was indeed, the arrival on the scene, of yet another contemporary champion who saw the potential of the iconic brand and is taking it on a 21st Century journey. This led to the origin of film’s name, ‘Fabergé: A Life of Its Own’.

The documentary came about with the aligning of three former colleagues and friends from Christie’s London. They recognised that it was time that a contemporary historic record of Fabergé’s past and present be created. 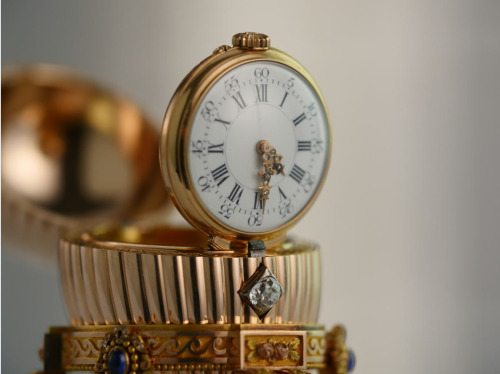 The team was aware that, to most young people growing up in in the 1970’s, the name of Fabergé was synonymous with the company manufacturing the ubiquitous fragrance, Brut, championed by actress Farah Fawcett and boxer Henry Cooper.

Together with Tatiana Fabergé, grand daughter of Carl Fabergé, a program was devised to achieve this. After several years of thoughtful planning, detailed orchestrating, settling the content and funding, the complete story of Fabergé could finally be told.

The script writer and director of the documentary, Patrick Mark, embraced the project with great fervour creating an outstanding photographic and literary narrative.

The latter spoken by the harmonious voice of Sam West, of Howard’s End fame. He takes the viewer along the many reincarnations of Fabergé to its present ‘life’.

Alice Ilich, recognised internationally as one of the world’s leading authorities on Fabergé and Russian art and her co-producer, Ludovic Lindsay, made this task achievable. 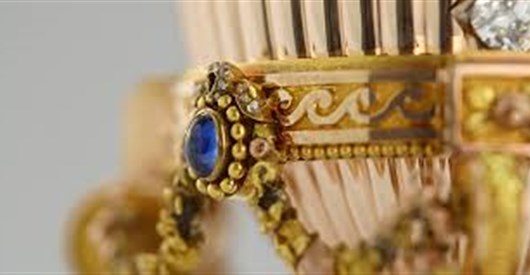 The “Faberge Pearl Egg” features 139 fine white pearls, and more than 3,300 diamonds as well as other precious gemstones, 2015

Museums and Collectors around the world, including Her Majesty the Queen, Christopher Forbes, Prince Albert of Monaco generously allowed the production team to film some of their prized items.

Throughout the movie there are collectors, historians and jewellers lending their insights.

The creative process of Fabergé’s engine-turning – guillochage is examined and one charming story, of why an entire collection of cigarette cases was privately commissioned and one in particular, encrusted at intervals with jewels along the engraved map of the Nile.

The outstanding production acumen of Patrick Mark, his passionate interest in discovering as much as he could about Fabergé’s history, together with his creative team, in particular its editor, Shawn Tracey, make for a truly unforeseen journey.

It was not just recounting the history, but the pursuit by the team of the proliferation of Fabergé items dispersed during and after the Russian revolutions. This took them to Russia, where they filmed a recent discovery by the Moscow Kremlin Armoury’s curator, Tatiana Muntian, that behind the massive safe door of the Fersman Mineralogical Museum, wrapped in tissue paper and concealed in a cardboard box was the unfinished Imperial Constellation Egg of 1917.

Its blue glass celestial globe was engraved with the constellation of the day of the Tsarevich’s birth.

Most of the Fabergé family initially fled Russia for Switzerland following the Bolshevik Revolution. The company’s exquisite creations were then scattered around the world through private sales conducted by the Soviet government seeking funds as well as the emigration of private individuals forced to sell their jewellery and Fabergé pieces to survive. These items were then incorporated into the exclusive private collections and distinguished public institutions, which include the Metropolitan Museum of Art, Hillwood Estate, Museum and Gardens, Virginia Museum of Fine Arts, The Victoria and Albert Museum, The Hermitage and one of the most recently formed collections on loan to the Houston Museum of Natural Science.

Even today the lure of Fabergé is witnessed by passionate collectors traveling to international auctions and for some to participate in the hunt for lost Fabergé items.

The most important of these is the search for the missing Imperial Eggs. This takes us to the exciting post script to the documentary.

This is the exclusive new footage tracing the amazing discovery of the missing Third Imperial Egg of 1887, recently discovered by chance in the United States and subsequently sold for an estimated US$30million.

There is a firm view that iconic brands last forever. The history of Fabergé is testament to this.

The creators of the movie Fabergé are delighted to bring to the public the rich and exciting story of Fabergé. Fabergé: A Life of Its Own
Palace Cinemas

The award-winning documentary Fabergé: A Life of Its Own (2014), tells the fascinating story of one of the most prestigious names in luxury goods, offering unprecedented access to the most esteemed private collections, insights from world experts, and interviews with the descendants of the Fabergé family. The film highlights the royal connections to the extraordinary Fabergé artistry and includes exclusive new footage that offers a rare opportunity to see two historic pieces never before exhibited to an international audience. This special Cinema Event release will be in movie theatres in Australia as of the 15th August.

Event Cinema, a rapidly growing sector of the entertainment industry showcasing events-based performances, events, and presentations, and Arts Alliance bring an ever-expanding international portfolio of releases spanning all art forms to movie theaters in over 70 countries. Event Cinema is continually evolving to find innovative big-screen experiences, with exciting arts events from opera and ballet, top art exhibitions, and theater performances, to iconic rock and pop concerts and documentaries. These unique events can be enjoyed by audiences across the globe together on the same day in movie theaters.

Arts Alliance is the leading producer, financer, distributor, and marketer of Event Cinema worldwide. With over 70 Event Cinema releases across screens around the globe, Arts Alliance develops, markets, and distributes world-class films to audiences in 4000+ screens in over 70 territories, engaging fans with the content they are most passionate about. In the fastgrowing Event Cinema market, Arts Alliance presents multi-dimensional content across all genres: live opera and ballet

Hot on the heels of the success of Downton Abbey, which captivated the hearts of English viewers during 2010, comes news of the all new three part series of its inspiration, Upstairs Downstairs. It is another character laden piece filled with wonderfully flawed people ensuring that everyone viewing feels right at home.