The Gallery of Modern Art (GOMA) at Brisbane is offering a free program of films “Fairytales and Fables” from 10 January – 30 March 2014, providing many memorable mesmerizing moments for people to enjoy a sprinkling of magic dust from the wand of the many creative people who made it happen. All the stories on offer will screen at GOMA’s Australian Cinémathèque and there will be plenty of tales that both enchant and unnerve.

GOMA’s fantastic festival of film will open on January 10th with a special event, one that blends the exquisite 1001 Nights-inspired shadow puppet animation The Adventures of Prince Achmed 1926, with live accompaniment.

This is the oldest surviving animated film known, with superb silhouette techniques used by the creators taking great inspiration from their cardboard cut outs. The movie was very avant-garde in its day and today is still a tribute to human imagination, which is more powerful than knowledge.

The story was taken from the collection of fables and fairytales known as 1001 Arabian Nights, primarily the story of Prince Achmed and the fairy Paribanou, which featured in ‘The Blue Fairy Book by Andrew Lang.

Restored brilliantly by German and British archivists 1998 – 1999, this is a classic movie in the true sense, one of renowned excellence in its day.

The original score music was also reinvented when British film composer Geoff Smith wrote a new score in 2008, which he performed live as it was in 1926. Other contemporary scores have been written since, such is the inspiration of this work for current movie music composers. 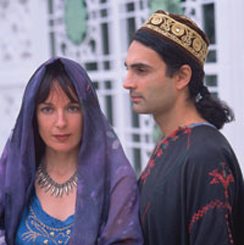 For the opening night event on the 10th January at 6:30 pm vocal and instrumental music accompaniment will be presented by the duo Oscar and Marigold aka Kim Cunio and Heather Lee.

Oscar & Marigold are Brisbane based performers who present some of the oldest and most beautiful sacred music written by such luminaries as Saint Hildegard Von Bingen (1098-1179), an outstanding German writer, composer, philosopher, mystic, abbess and polymath of her age.

They perform comfortably in many languages and styles. Heather sings with a pure voice, Kim sings with a velvet bass and they play a myriad of forgotten and rare instruments.

Director Chris Saines said ”Fairytales and Fables’ offers an opportunity to revisit some of the genre’s most popular titles, such as Wolfgang Petersen’s The Neverending Story 1984 and Jim Henson’s Labyrinth 1986. Labyrinth, produced by George Lucas (Star Wars) and the amazing creator of the magical Muppets Jim Henson (1936-1990) was for Henson a sad end to a brilliant career.

It was mostly panned by critics in 1986 but has since gained a strong ‘cult’ following.

Jim Henson certainly knew all about the extraordinary and fantastic power of puppets to tell a tale and capture the attention of children of all cultures and all backgrounds.

Singer David Bowie featured as Jareth the Goblin King and Jennifer Connelly as Sarah. She is on a quest to reach the centre of a maze to rescue her infant brother Toby, who has been kidnapped by the Goblin King.

Apart from Bowie and Connelly most of the other significant characters in the film were puppets. There will also be other opportunities for everyone to discover other films that help to reinvigorate these genres on the big screen, including Rob Reiner’s much-loved fantastic comedy The Princess Bride 1987, which is sure to attract a crowd.

This movie that is a combination of comedy, adventure, fantasy, romantic love, romance, true love and fairy tale has a loyal fan base and following worldwide. It was gleaned from the 1973 fantasy romance novel written by William Goldman who said “I’ve gotten more responses on The Princess Bride than on everything else I’ve done put together—all kinds of strange outpouring letters. Something in The Princess Bride affects people“.

In November 2013 Disney Theatrical announced they would be staging a new stage musical version, based on the novel and film screenplay. Fantastic Mr Fox a story by English writer come genius Roald Dahl, is both a feast for the eyes and ears. Wes Anderson, he takes you into a completely new world from the first moment... Director Chris Saines noted that the films in the program ranged in tone from light-hearted to disturbing. They include reinterpretations of classic fairy tales, as well as original stories that combine elements of fairytale and fable with parody, experimental film and horror.

So parents do beware of what your children, particularly those under ten years of age are going to see.

Nightmares can last for a long time. As part of the Gallery’s New Wave Teens program, a free screening of Spike Jonze’ Where the Wild Things Are 2009, exclusively for teenagers will be held on Saturday January 18 from 1.30pm.

On Saturday February 22 at 1.00pm, program curator Amanda Slack-Smith, Curatorial Assistant, Australian Cinémathèque, will give a talk exploring the oral and literary roots of the darker side of the cinematic fairytale.

For the full program check out the GOMA Cinema Website

On Wednesday October 26th at 10.05 pm renowned Australian Actors Cate Blanchett and Geoffrey Rush (who played together in: Elizabeth The Golden Age) will host ABC1’s Program At the Movies: 25 years with Margaret Pomeranz and David Stratton anniversary episode. What a wonderful milestone to have achieved for two of Australia’s most passionate presenters of all that is best in the world of cinema.