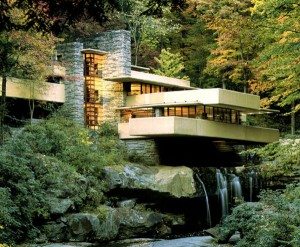 Twentieth century American architect Frank Lloyd Wright (1867-1959), greatly influenced by the art forms of Japan, placed an emphasis on horizontal lines. His innate understanding of the philosophies of Taoist Zen Buddhism are evident in his design for one of his most successful compositions, a house and garden entitled Fallingwater. He fitted it seamlessly into the woods of western Pennyslvania, holding fast to the romantic notion that nature itself held the key to inspiration. He never lost sight of his boyhood vision for that of an ideal, pastoral garden in which there is a direct, vital link between the landscape and the built forms it inspired. He said ‘man takes a positive hand in creation whenever he puts a building upon the earth beneath the sun…he too, is no less a feature of the landscape than the rocks, trees, bears or bees of that nature to which he owes his being’

Join the Twilight Walk & Candle-lighting Ceremony at Brisbane on May 2, 2012 between 4 – 6pm. It marks the beginning of Domestic Violence month in Australia.