Winners of the 2015 Fanfare Competition by Artology. Their works are currently on show at the Sydney Opera House, being played prior to every performance.

Artology is a social profit organisation, which through its projects aids youth development and social change through the arts.

Based in Sydney and founded by Graeme Wood AM, they are unlocking and emboldening and enriching the lives of young people through active participation in the arts.

At the Sydney Opera House the creativity of eight youthful Australian composer hopefuls is currently being expressed in Fanfares now alerting patrons that shows are about to begin.

Sydney Opera House fanfares are the first of their kind in Australia and in the year ahead some estimated 1.4 million theatre-goers throughout 2015 will hear them.

“Fanfare has grown into a huge community of more than 50 young composers, hundreds of compositional creations and countless supporters. It’s thrilling to know that it has crossed the oceans to the spectacular Sydney Opera House. It’s a dream come true. How wonderful it would be to arrange an Aussie Fanfare exchange.” 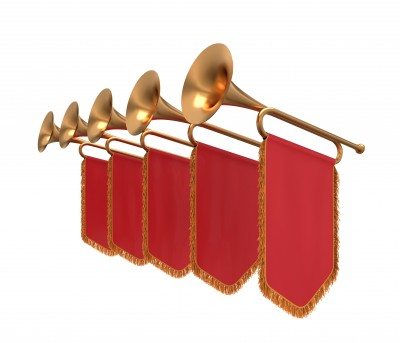 The Fanfare compositions, which are short, exhilarating pieces of music will be heard in the foyers before every show until the end of the year, creating an atmosphere of anticipation and excitement for audience members.

It will also add another dimension to their Opera House experience.

The group of young composers whose works are on show are honouring a tradition in short musical flourishes, originally played by trumpets and other brass instruments.

It is all about making a fuss, letting people know that an important occasion or event is about to happen.

Fanfare composer John Rotar said: “…being a fanfare winner means that my home town of Bundaberg will now be represented on the international stage.”

Emerging out of the Middle Ages, Fanfares became an integral aspect of royal life for centuries, including attending the opening of parliament once such a tradition had been established.

During the 19th and early 20th century at special evening events, Fanfares also announced the arrival of important guests, especially those representing the monarchy.

It was in 1942 that American composer Aaron Copland wrote his stunning Fanfare for the Common Man, played by horns, trumpets, trombones, tuba, timpani, tim-tam and bass drum. The manuscript score is now to be found in the US Library of Congress.

Copeland’s special fanfare heralded the arrival of US participation in World War II, preceding the famous speech by Vice President Hern A. Wallace proclaiming the dawning of the Century of the Common Man. Artology began their competition for a Fanfare in 2014, and this year challenged their young hopefuls to produce special works that would provide a special experience for people in a special building, one they would remember.

Held annually, winners are chosen from more than 120 entries, and 19 year old Fanfare composer John Rotar also noted “It’s a great way for regional and rural Australia to connect with one of Australia’s most magnificent cultural icons”.

Sydney Opera House Chief Executive Louise Herron said: “Through our Children, Families and Creative Learning team we are deeply committed to inspiring the next generation of artists and audiences. We want to hear their voices and unleash their creativity. This is what young people demand – they want to be makers, not just consumers.

A villa in ancient Roman times was all about the cultural ideal of rural life and in it, surrounded by nature, man could become the master of his own destiny