London based 18th century composer Georg Frideric Handel (1685-1759) would no doubt be surprised his three act opera Faramondo, which he completed on Christmas Eve 1737, was both appreciated and applauded wildly in downtown Brisbane Australia, a city and country not on anyone’s radar at the time.

It certainly is now, following on from Scottish Opera Director Paul Curran’s authoritative amazing re-imagining of this what surely must be Handel’s greatest masterwork, which has to date only be played a handful of times.

Long will everyone present on this opening night of the inaugural Brisbane Baroque music festival at Brisbane remember the power and sheer joy of the music, the technical brilliance and bravura playing of the musicians.

To top it all off there was the glorious singing and acting by the hand picked cast, all of whom individually excelled themselves at every phase of their performance, while as an ensemble were truly sublime.

What an extraordinary dramatic work this is full of complicated relationships the order of the day – well nothing really changes at least in terms of our humanity. Wonderful too that we were given a very inventive ‘road map’ so we could follow the storyline acted out by not only a sensational cast of singers but also a team of great and very youthful actors from the Harvest Rain Theatre company Faramondo gained great success at the International Handel Festival in Göttingen, Germany in 2014 and has now at the Brisbane Baroque Festival 2015, taken the crowd by storm.

This is opera seria at its best; based typically on a classical subject and characterized by extensive use of the aria da capo and recitative.

The ornamental effects were delicious, a splendid com­bi­na­tion of tech­ni­cal know how, split-second tim­ing, thrilling accu­racy and, above all ‘over­ar­ch­ing ele­gance’.

The excellent acoustic and virtual size of the Conservatorium Theatre worked extremely well for this powerful production.

The music is truly sublime… Handel excels, the theatricality and musicality is breathtaking.

What more can anyone say… Handel had a steady handle on the compositional style of his time that today still holds us not only enthralled but also in mesmerized awe of his talent.

The players of the splendid Orchestra of the Antipodes were led with powerful humility by Brendan Joyce and guided with exceptional élan by conductor and harpsichordist Erin Helyard. 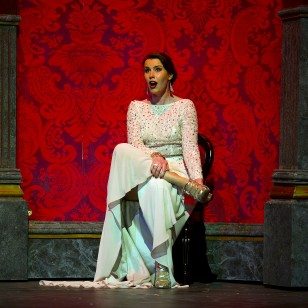 There are simply not enough superlatives. How else could we have stayed the four-hour journey if we weren’t filled with such admiration for everyone concerned.

Writing an opera about warring French factions for a cast of eight characters was unique in its time and in this production the masterful casting produced an outstanding result.

The complexity of the plot arises from a promise made by Gustavo King of the Cimbrians, that he will give his daughter’s hand in marriage as well as his kingdom, to the man who delivers to him the severed head of Faramondo, King of the Franks.

He mistakenly believes Faramondo has committed a crime against his family.

As with all quite silly eighteenth century opera plots there is a great deal that has to happen before noble generosity can triumph over adversity and hatred and ‘constancy can conquer cruelty’. Looking beyond that in true early music style, the hero of the evening is played by a mezzo-soprano rather than how it was in its day by a castrato.

American mezzo-soprano Jennifer Rivera was a stunning Faramondo. Her top notes were sensational, filling the auditorium thrilling everyone, ensuring that we knew she really meant business. Her voice had just enough depth and strength or would we say masculinity as to be completely convincing and after a while you didn’t even think of gender.

Hailing from California Jennifer has had an amazing career to date including being nominated for a Grammy award – no wonder. Jeremy Kleeman as Teobaldo, with Wayne Tigges as Gustavo and Anna Devin as Clotidle and company — with Anna Devin – Soprano at QPAC Conservatorium Theatre.

Wayne Tigges as Gustavo, King of the Cimbrians commanded the stage with his presence and the voice that has been described as ‘vocal velvet’ living up to its name.

Scintillating Irish soprano Anna Devin was Clotilde, Faramondo’s sister. Her articulation and seamless style was truly beautiful, overwhelming at times with her intensity and intelligence at managing some of the most difficult passages with such eloquence.

Countertenor Tai Oney as Adolfo in his arias produced such clarity in his coloratura moments; his is a bright strong male soprano voice that he uses to powerful effect. Countertenor Christopher Lowrey as Gernando was exceptional and suitably sleazy when he needed to be.

His sweet honeyed dulcet and mellow toned voice with its lyrical excellence was silky and seductive and completely captivating – glorious to listen to and a pleasure to behold, at many points he held us all in the palm of his hand.

There was one aria of his that completely took everyone apart it was so sublime, reaching realms rarely entered with such engagement.

The musicians I was talking too afterward knew exactly which one I meant immediately but were unable to give me its name. Number 46 on our sheets one said afterwards I think… there are so many stunning arias Carolyn. He was right. Mezzo-soprano Anna Starushkevych as Rosimonda sang quite a number of them. She looked completely fabulous in her glimmering designer gown with the split up the side and flaming red hair dazzling with a voice that captivated and enthralled us all.

Intense, engaging, she’s a powerhouse on stage a defining presence with a dazzling voice.

I have to single out and mention my admiration for set designer Gary McCann about the way in which he linked this modern casino setting to the past. It was glamorous and bizzare all at the same time. The splendour of the thrilling backdrop curtain that came down for scene changes provided an extraordinary vision of individual artists such as Anna. They posed against his brilliantly conceived 17th -early eighteenth century hunting scene so full of menace, especially when lit brilliantly and effectively by Gavan Swift the lighting designer.

It knocked our socks of along with the brilliant costuming. All exceptional.

Bass baritone Jeremy Kleeman as Teobaldo punctuated his performance with authority and fine singing. He and the Aussie songbird soprano Alex Oomens as Childerico equipped themselves well producing some fine singing.

They may have had only smaller roles to play, but they were both pivotal to the storyline, slotting seamlessly into this extraordinary team.

The youthful diminutive Alex has such great strengths of style and she once again showcased her glorious voice that will now doubt gain yet further richness and refinement as she leaves soon to study at the Royal Academy of Music in London.

The acclamation didn’t end in the theatre.

At the celebratory gathering afterwards the Governor of Queensland expressed his pure delight and the head of QPAC waxed lyrically as everyone applauded again not only the stars but all those who supported the performance.

Then there was time to say thank you to Brisbane Baroque Artistic Director Leo Schofield AM and Executive Director Jarrod Carland, the dynamic duo who made it happen. They were heaped with much deserved praise. It is no mean feat to have the courage of your convictions and to bring such excellence across the world at considerable cost to woo a new audience in a new town and succeed.

It is the stuff dreams are made of and to all concerned it’s a very big well done from me. We did it… members of the cast of Faramondo with conductor Erin Helyard after the event… Brisbane Baroque, 10th April, 2015

You all reached for and attained a pinnacle of perfection and I could only feel sad for all those who missed such a sensational experience and an opportunity to embrace true greatness.

Stars on the forehead for everyone.