By the end of the eighteenth century and early nineteenth century in England bouquets of flowers and herbs were carried by a bride, looking for all the world as if they had just simply been gathered from a nearby field or meadow. They were charming, delicate, symbolizing both purity and new life. They were often bound by a ribbon or wound together by ivy, representing two hearts being interwoven as one.

This was a very pleasing arrangement, especially for the heroines and heroes of Fanny Burney’s or Jane Austen’s latest novels to carry on their wedding day. The flowers included roses, peonies, sweet peas, scabious, lilies, delphinium, dahlias, nerines and fuschia. In January 1809 Rudolph Ackermann produced the first issue of what would become the most influential monthly periodical of its day ‘The Repository of the Arts’. It was aimed at, and catered to, a populace eager to keep up with the latest trends and information about styles of interior décor, especially those based on what a wider society perceived as what was preferred by the landed gentry and aristocracy.

This included a great range of the ‘at home’ activities that could be completed without depending on the vagaries of the weather. All of those aspiring to be the most fashionable craved the up to date latest information about plants and flowers and detailed instructions on how to arrange them. Since the previous century Queen Charlotte and her daughters had set a fine example for all young ladies of fashion and style by being heavily involved in the world of arts and crafts. At Frogmore, the Queen’s favourite home, the ladies had painted delightful ‘chinoiserie’ decorated lacquered panels on the walls.

They all loved flowers and English physician and botanical writer Dr. Robert Thornton had noted effusively. ‘There is not a plant in the garden at Kew…but has been drawn by her gracious Majesty, or some of the Princesses, with a grace and skill, which reflect on these personages the highest honour’.

Two of the new and most popular flowers were the dahlia and the fuchsia. It was in 1789 that dahlia seeds were first sent from Mexico to Madrid and Lady Holland posted the first seeds to England, while acting as her husband’s librarian during his diplomatic mission there.

All the dahlias in England today more than likely descend from these original seeds. In 1829 the dahlia was proclaimed ‘the most fashionable flower in England’ and Henry Phillips publication ‘Flora Historica’ described the ‘full brilliancy of these floral luminaries’ as shining ‘as conspicuously in our groves as gas in our towns’. 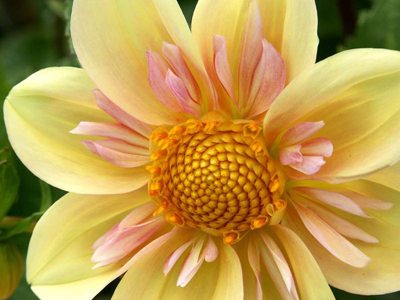 In 1833 the dahlia was decreed a ‘florist’s flower’ and joined an illustrious list, which included carnations, anemones, auriculars, daisies, tulips, ranunculus and hyacinths, all of which were highly suitable for developing the English art of fashionable flowers and their arrangement.

All the flowers on the ‘florists’ list had been elevated to the heights of favour and importance by the various flower societies first founded by French Huguenot immigrants fleeing religious persecution when they landed in England in the seventeenth century following the revocation of the Edict of Nantes by Louis XIV.

While the dahlia’s route to England was via ‘high society’ the fuchsia, on the other hand, arrived it seems in a humble sailor’s bag. 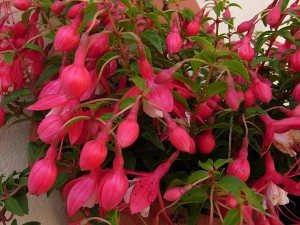 It was brought home from the West Indies by a sailor for his wife in 1792 and the story is that an astute nurseryman James Lee spotted it growing in the window of their poor abode.

He duly approached them, purchased and propagated this intriguing new specimen and by the end of the next year he had raised 300 flowering plants for sale.

It is reported that ‘chariots flew to the gates of old Lee’s nursery grounds’ to purchase them.

Lee was obviously a wily character with a nose for sniffing out the goods that would cater to coming trends and in no time at all the plants were completely sold out. Fuchsias became a mainstay of indoor decoration, both as pot plants and cut flowers, right throughout the nineteenth century and beyond

The eminent botanist Sir Joseph Banks himself would not allow anyone else to carry the fuchsia he had acquired into the greenhouse at Kew Gardens, so excited was he by its arrival.

The thirst for exotic horticultural knowledge was even described in children’s books of the period. In a ‘A Visit to the Bazaar’, in which discussions take place between Mr. and Mrs. Durnford and their daughters about the derivation and development of flowers.

‘I should like that pot of china roses Mamma‘, said Emily, ‘they came originally, I believe, from China, and are called Rosa sinensis’…Oh Mamma! do buy that sweet myrtle’ cried Caroline,  ‘I am so fond of myrtles and geraniums’. 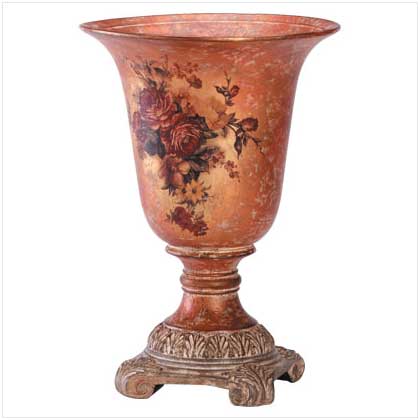 Many of the vases used for early nineteenth century flower arrangements were similar to their predecessors. Glass and ceramic bowls, beakers, urns and vases of baluster, semi-circular, ovoid or decanter shape were favoured and bowls supported by a central leg or trio of figures were exceedingly popular. English porcelain factories churned out huge quantities of vases for flower arrangement by the thousands, including flowerpots with holes in the bottom and bases to stand on to catch any drips.

Bulbs were grown in water in ‘glasses’ made especially for doing so and at Derby and Worcester vases and semicircular bulb pots and delightfully painted flower bricks all became a specialty produces in a variety of sizes and with a huge choice of painted fashionable scenes, including the delightful Chinoiserie.

Vases and pots were produced in pairs and sets of three and give and these garnitures, as they became known, (from the French word garnir meaning to garnish) looked very effective when they were placed centrally or either side of a ‘mantelpiece’ a word that replaced the earlier ‘chimneypiece’. Tables were placed in the centre of rooms, especially round tables with a bowl filled with wondrous flower displays.

Tables or commodes between windows were another favoured place for flower display and the increase in cut flower arrangements was echoed, and indeed overtaken, by the increase in growing plants indoors on stands.

These were placed under windows or in recessed window embrasures.

As the Victorian age moved forward flowers overflowed from indoor rooms into the highly fashionable conservatories, which now attached to many houses in England.

Conservatories became the absolute rage and were also used for balls and lavish parties, kept warm by huge stoves and a profusion of plants indoors helped everyone to endure long freezing winters.

On 29 September 1836 Lady Londonderry noted in her diary that at the Winter Palace in St. Petersburg

‘They have excellent contrivances for flowers…large stands for filling up corridors and fireplaces and recesses and a particularly pretty manner of portioning off corners or posts (parts) of rooms by railing or Treillages, on which creepers are trained having their roots in a box on the ground’. If you were a member of the ‘beau monde’ during the ‘season’ you could hire the flowers and shrubs from James Cochran’s shop in Duke Street.

He earned the praise of the ‘fashionable world’ for a ‘happy disposition’ of plants and his gorgeous garlands were very popular.

After dining with Lady Londonderry Benjamin Disraeli, the Prime Minister commented ‘there was a bouquet by every guest and five immense pyramids of roses down the table’. 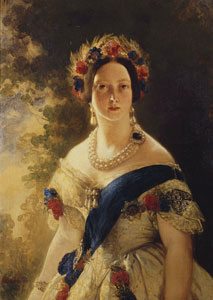 If he had to sit on a buttoned sofa surrounded by the new Victorian craze for a frenzy of ferns, he would have had much more to say I am sure.

Fern decoration reached dizzying heights by 1851 when cases filled with ferns were exhibited at The Great Exhibition held in Hyde Park, London.

Queen Victoria from a young age had been very fond of flowers and she always had them in any room that she was occupying.

Roses in pots were recommended for indoor display, especially in a boudoir because of their scent.

Everyone particularly loved tea roses, which had been so-called because their scent resembled that of tea leaves.

Today Julia’s Rose a modern variety echoes the preferences of the day.

Their colour is a delicious delicate buff brown tinged with softest pink and in the late Victorian era and the Edwardian era elegant lace and lawn tea gowns of this colour became de rigueur for ladies to wear when taking tea in an appropriate setting, which was also liberally sprinkled with tea roses. 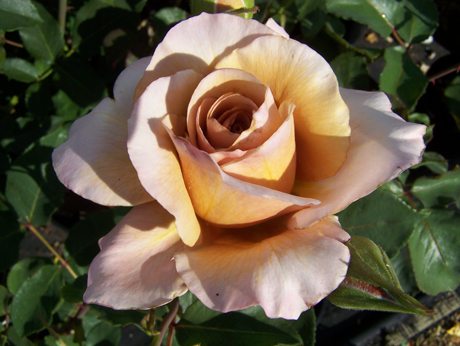 Often they purchased the gowns in white and then dyed them at home with tea, so highly appropriate.

Everything was just too lovely for words.

Designed first in the 1870’s tea gowns were easy, comfortable garments appropriate for a woman to wear for tea with family and friends ‘at home’, but they became increasingly elaborate and fitted.

By the 1890s they combined exotic fabrics and historical references, and were worn for public appearances, such as dinner parties.

This stunning example has a richly embroidered front panel  probably made in India designed to appeal to European taste, and complimented by Limerick lace from Ireland.

From the back, a long pleat of lace drops from the neck to the hem, a style known at the time as the Watteau pleat, after dresses seen in paintings by eighteenth-century French painter Antoine Watteau who was also fashionable. Flower mania, Fern mania and foliage mania had all gone together well during the great age of housekeeping. However by the turn of the twentieth century and the arrival of the elegant Edwardian era, it was all being toned down.

Once again the focus switched to providing flowers that looked as if they had been just gathered from the garden, the nearby wood or meadow.

They were arranged loosely with a great deal of pizazz and style, going back to fashion the future and giving further impetus to the evolution of the English art of fashionable flowers and their arrangement.

The City Recital Hall, Sydney offers five lunchtime concerts in 2014, for those working or shopping in the vicinity of Martin Place, the heart of the Sydney CBD