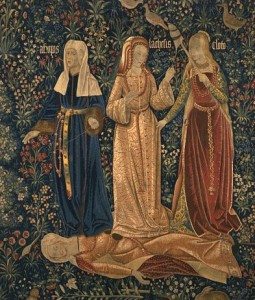 Woven textiles were a measure for the status and wealth of a society from ancient times. At Arras in France, an important garrison town for the Roman Empire the entire population converted to Christianity in the fourth century. It became a centre for the wool industry and its wealth grew after 1180 when it was granted a commercial license by the crown, based on the successful production of tapestries for which ‘Arras’ became a generic term. The ‘three fates’, an image from Greek mythology was captured on this tapestry weaving the threads of destiny. Lachesis determined the length of thread – the period of one’s life, Klotho combed the wool and spun the thread of life while Atropos wove the thread into the fabric of one’s actions. The belief was it didn’t matter what you decided you wanted to do, or to be you couldn’t escape a pre-ordained destiny.

The Imitation Game stars Benedict Cumberbatch who deciphers difference well, helping us understand the importance and significance of a good man’s achievements