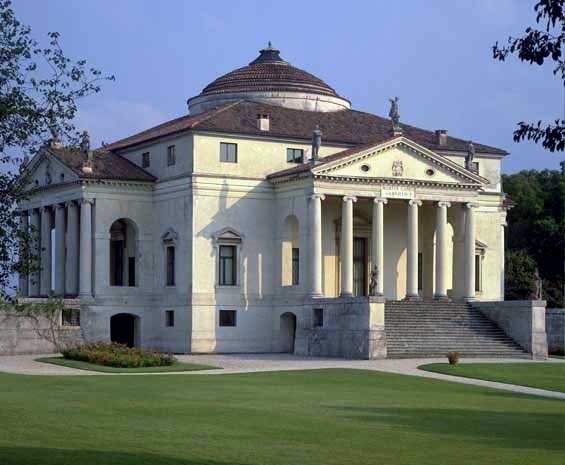 Professor Bruce Boucher’s scholarly and accessible work, Andrea Palladio, The Architect in his Time was first published in 1994  in a ‘user friendly version’…to fit comfortably into a suitcase or backpack for a quick trip to Vicenza, the scene of many of Palladio’s triumphant works in architecture. Don’t know about you but I have always been ready to go to Venice in 20 minutes. But we digress…Palladio, Boucher confidently tells us, ‘is arguably the most influential architect the western world has ever produced’. 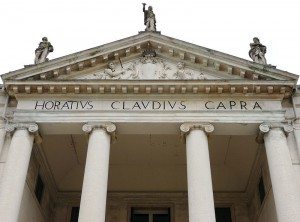 By the end of the book I have to admit I was ready to jump on a plane for Venice, Vicenza and the Veneto to visit all those buildings, both public and private, designed by Palladio so that I too could enjoy experiencing ‘their attraction and wonder at their perfection’. Palladio made ‘man the measure of all things’. He re-interpreted the first century treatise of Roman architect Marcus Pollio Vitruvius, taking note of his advice to use eurhythmy, proportion, order and harmony to design buildings for both public and private use.

This splendid narrative, lets us travel with Palladio on a dusty road to Rome on foot, just like all those young English gentlemen of the C18 on their ‘Grand Tour’ who followed Palladio’s important guide (Antichita di Roma) to its ancient monuments.Following publication of Palladio’s ultimate traveler’s guide and his Four Books of Architecture (Quattro Libri dell’ Architettura) in England by Palladian enthusiast Richard Boyle, 3rd Earl Burlington in the early eighteenth century, enthusiastic English noblemen took up his ideas readily. They produced villa architecture, in what has been coined the ‘Palladian’ style, one that had a profound effect on the development of western domestic architecture for over two centuries. 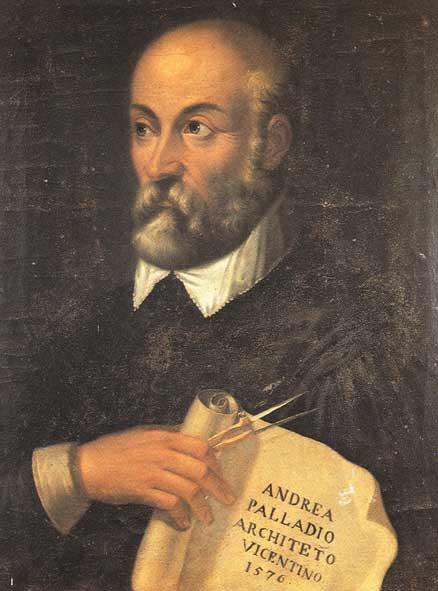 Just as Palladio himself, in his Quattro Libri, endeavoured always to address a lay audience, so Bruce Boucher brings the architectural hero of his book, successfully into the same arena. He paints a clear and vivid picture for us of this man of his time, a ‘Renaissance Man’, one whose thirst for knowledge is only exceeded by his desire for more. He offers  us an opportunity to not only understand how and why his architecture evolved in tune with intellectual ideas and social change, but also to visit the buildings that influenced him on an armchair ride, illustrated by brilliant photography, principally by Paolo Marton.

We learn to know and appreciate why Palladio wanted to ‘see with my own eyes and measure everything with my own hands’ enabling him to produce well conceived, detailed and integrated concepts that ultimately led to successful results. Something that still holds true today in our own frenetic world. 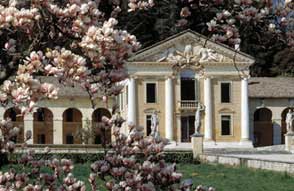 Without solid foundations nothing of substance that lasts can ever be produced. Boucher also acquaints us with Palladio the environmentalist. At the Villa at Maser, his brilliant exploitation of a natural spring to provide water for the villa, its gardens, farm buildings and kitchen garden is a lesson on how to tailor a design that respects nature while using its bountiful resources cleverly. One could safely say that Palladio, if alive today would want to ensure that we returned to nature all our waste products. He may even successfully, through Professor Boucher,  stir us all to become much more passionate about protecting the fragility of our environment and ultimately safeguard the future of mankind.

This book is a must for all those interested in any aspect of art and design. It is also for those who want an intelligent, informative read, one that supplies the facts without being dry or too academic, but rather adopts an attitude that is both erudite and enjoyable. It should stimulate your visual literacy and enquiry, and assist you to open your eyes to the possibility of not just looking but also seeing and gaining a better understanding abouty the world around you. It is also an exceedingly important contribution to the ‘real history of classical architecture.’

PS. You may enjoy these other posts…about Palladio and his style

Palladio, in pursuit of the perfect house

What is Palladian style, more than a villa in the Veneto?

You can also purchase the book at the Australian Online bookstore www.bookoffers.com.au

Shakespeare in the Royal Library, starting 13 February 2016, is an exhibition at Windsor Castle examining aspects of the playwright and his influence on royalty