My favourite trio of boutique style small museums offer a unique experience to the visitor. All are in amazing locations with collections that cover epochs of history from antiquity to the nineteenth century in Europe.

They are sited at Sydney, Paris and London and are the Nicholson Museum, Musée du Moyen Age and Sir John Soane’s Museum.

They provide an intimate experience.

It is well worth giving up at least a half a day or more to each, so that an unhurried interaction with the objects can be the aim.

Every time I have visited these three, and it’s more than once, I have not only again been captivated, but have also found there so much more to look at.

They are all crammed full of wonderful and unique treasures.

The advantage of this type of Museum is that you can get up close and personal with very classy collections.

Each also have shops with unique gifts you would not ever find anywhere else. And, the bonus is they all offer a unique perspective on, and of, the art and history of man. 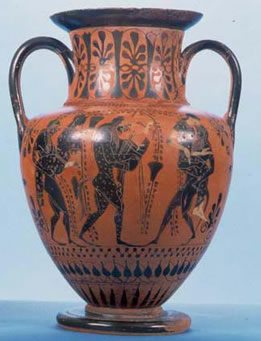 The Nicholson Museum celebrated its 150th anniversary in 2010 at Sydney.

The museum offers free to the public,  a diverse, intelligently displayed set of wonderful objects dating from many different eras and places in antiquity. They come from Greece, Italy, Cyprus, Egypt and the Near and Middle East.

As well as more notable items, such as a select and fabulous group of painted Greek vases, there are also many interesting artefacts, bronze implements, bronze and terracotta statuettes and figurines, terracotta lamps, as well as early Greek and Roman glass.

Of particular importance is the fine collection of New Kingdom sculpture, featuring the monumental head of Rameses II and a diorite upper torso of Horemheb, who was Tutankhamun’s regent and general.

They also have an Egyptian mummy that is completely intact, with the inner painted coffin on view inside its original sarcophagus.

The museum staff are helpful and the special publications they sell are superb if antiquity is your passionate interest.

The list of Exhibitions is impressive and include “The Etruscans: a classical fantasy” 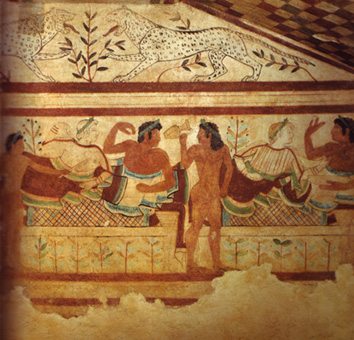 In popular imagination the Etruscans are the very stuff of fantasy, myth and legend.

Who are they, where did they come from, what does their language mean?

In reality, although wiped out or assimilated by Rome, they have left us an extraordinarily rich heritage of art, jewellery, metal working, terracotta sculpture, urban planning, walls, and roads.

Indeed, in the sixth century before the Christ event, the Etruscans were the most powerful people in the Mediterranean.

So what went wrong? 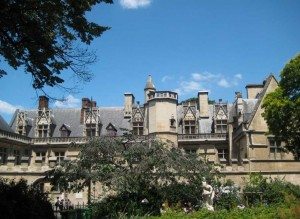 At Paris the Musée du Moyen Age is perhaps the most outstanding example still extant of civic architecture in medieval Paris or, as the Romans called it, Lutetia (derived from an ancient Parisii word for marsh or swamp). Formerly the town house (hôtel) of the Abbots of Cluny and built from 1334 the building was rebuilt by Jacques d’Amboise, Abbot in commendam of Cluny between 1485-1510.

With its intriguing combination of Gothic and Italian Renaissance architectural elements in 1833 Alexandre du Sommerard moved into this old Bishop’s palace and installed his large collection of medieval and Renaissance objects. When he died in 1842 the state purchased the collection and opened it in 1843 with his son Edmond as its first curator. Among the outstanding collection of textiles from the Middle Ages are the The Lady and the Unicorn tapestries, which were purchased for the Museum in 1882 by Edmond Du Sommerard. They illustrate the five senses and the sixth “To My Only Desire”, stands alone. 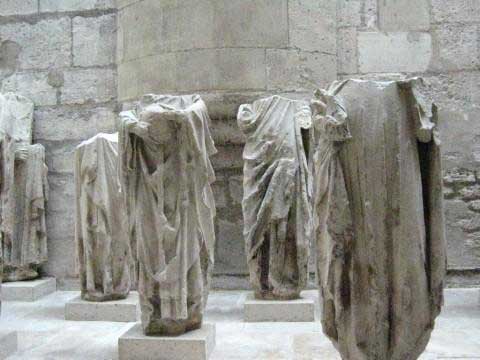 This delightful place is constructed over the remains of Gallo-Roman baths, which are famous in their own right.  Rediscovered in the 12th century large sections of the frigidarium or cold rooms were fed by a subterranean aqueduct.

The massive walls and vaulted openings provided a direct model for medieval architects building cathedrals, bridges, and other large structures in the so-called ‘Romanesque’ style.

Since the year 2000 visitors can gain access to the Museum by strolling from the Saint-Michel and Saint-Germain boulevards through a succession of glorious garden spaces, which are inspired by the representations of gardens and flowers of growing in the Medieval period on the Museum’s textile collection.

CURRENT EXHIBITION/s
Le Trésor de Guarrazar (The Treasure of Guarrazar): a magnificent collection of votive Visigoth crowns dating back to the 16th century.

At London is my favourite of the three the Sir John Soane’s Museum, which is situated in an inner suburb Lincoln Inn Fields, nearby to Holborn tube station. I suspect it is because as an interior designer, I just enjoy the whole experience here. An exceptional architect of the Regency period in London, John Soane was mainly ignored by the Prince of Wales, despite being the esteemed architect of the Bank of England. Born in 1753, he was the son of a bricklayer and following a long and distinguished career determined to establish the house as a museum to which ‘amateurs and students’ should have access.

A brilliant Professor of architecture, Soane used models of the great sites of Ancient Greece and Rome to familiarize his students with the principles of architectural design. A member also of the Royal Society his own home in the styling of its facade is 100 years ahead of its time. It has more in common with terrace homes of the Art Deco period than his own era and proves that he was a visionary.

While Soane championed the classical style, he also pared it down and reduced many of its elements to simple lines and elegant forms, very different from the more robust classical lines of the Prince of Wales’s architect John Nash.

The young men who came to study at his house were very privileged to work in a drawing office surrounded by a cascade of beautifully detailed plaster casts and models that he made and were taken from the iconic treasures of classical antiquity. There are masks, rosettes and garlands, capitals, columns, urns, snakes and trophies, a pair of leopards and a panoply of vestal virgins dripping down the walls, poking through doorways and cluttering a catacomb below that contains an Egyptian sarcophagus in this London home-cum-museum, which lay untouched for almost two centuries. 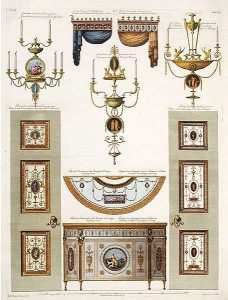 Designs by neo classical architect Robert Adam, from his Works on Architecture.

For many years the house was considered London’s most bizarre attraction. That is until Margaret Richardson, its now legendary curator arrived to transform it in 1984 and, the public gained some knowledge about what it had to offer. My first visit had been in 1978 when it was still in a state of romantic decay. Entirely captivated over the years I revisited a number of times and watched its progress recommending that it was a must visit when in London to a great many people. Those who did visit it came back having had a great experience and eagerly passed the knowledge on.

It was for a long time what appeared to be an Alladin’s cave, although many rooms remained shut as they were reorganized and restored. Some like Soane’s drawing office have never been opened except to a few as there are just too many precious relics and not much room to manoeuvre. Visiting with a decorative arts and design tour group in tow in 2001 meant us gaining a private viewing (the house was shut to the public) and access to many of its magical spaces. So if you have a group to go then contact the Curator for a special visit.

We were also able to view the greatest collection of paintings by eighteenth century artist and social commentator William Hogarth first hand and close up. As well as the survival of Soane’s own collection of over 8,000 drawings he collected the original drawings, and neoclassical masterpieces of Scottish architect Robert and James Adam, which you can make an appointment to view.

It is all quite simply remarkable. 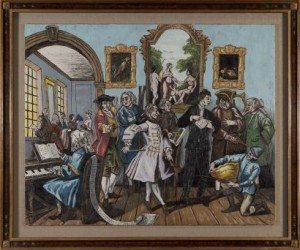 DAYS AND HOURS OF OPERATION
Tuesday to Saturday, 10-5pm when admission is free.

The Museum holds a special candlelit opening on the first Tuesday evening of each month, 6-9pm. No advance booking. Please expect long queues. Check the Christmas/New Year and Summer Opening Times before your visit.