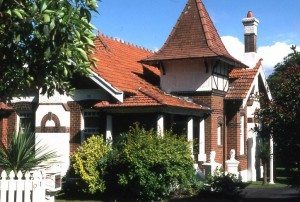 “Nature abhors the straight line’ was a rule of thumb when laying out a garden to suit a new style of Australian house as the great southern land finally became united under one banner at the moment of Federation. This was when the six separate self governing former British colonies of New South Wales, Queensland, South Australia, Tasmanian, Victoria and Western Australia formed one nation on January 1st, 1901. Within the garden a sense of seclusion was important, and fences and boundaries were concealed by informal planting without preventing the sense of space from spilling over to the adjoining property. The emphasis was on mixed planting, kept tidy, but not clipped, so the natural growth of the plant was respected, like that of the nation. 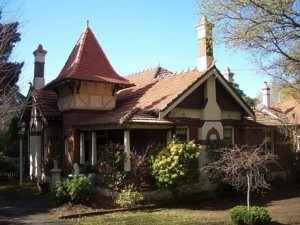 Houses were nestled into a garden where the tree planting and shrubbery framed the building and was brought up close and personal to the house. Within the garden a sense of seclusion was also important, and fences and boundaries were concealed by informal planting without preventing the sense of space from spilling over to the adjoining property. The emphasis was on mixed planting, kept tidy, but not clipped, so the natural growth of the plant was respected. At the time ‘respectable’ homes were built solid, of red brick and timber with such characteristics as slate roofs, stepped parapets, high pitched roofs and chimneystacks that formed a ‘picturesque’ composition of great complexity. 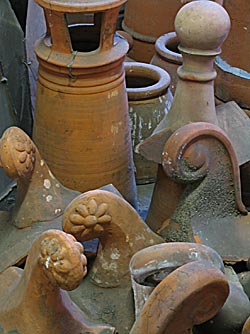 On top of ever roof was a finial of various forms, including the kangaroo a declaration of Australian nationalism. The houses contained women who were meant to be good wives, mothers and housekeepers. The man of the house was meant to be sober, reliable and the breadwinner for his wife and children, who were to be seen and not heard. Husbands had steady jobs, could be an accountant or company clerk, or in his own small business. He had at least one good suit, possibly two, a silver watch and chain to attach to his waistcoat. His wife spent her day doing good works and would have had at least one good hat, a best dress, which she had made by hand. Each child had one Sunday best outfit and the family went to church. Australian suburbs were busy burgeoning dramatically to house these most respectable families and the idea of subdivisions and estates was influenced by the American experience, although the houses remained essentially English in style. The houses usually had six or eight rooms. They were solid brick and or weatherboard and set in streets lined with pinoaks and plane trees. Properties were fenced to define the street boundary and provide the house with an air of increased substance. The people who lived in these new suburban houses did not like the idea of change. They were loyal to Britain, to good King Edward and they did their duty in times of peace and war.

Turkey Flat Vineyard, in the heart of the famed Barossa Valley, is a vital part of the region’s rich societal and cultural heritage with its award winning wines