In society today no one should have to go without food when the world produces enough for everyone to eat. On World Food Day 16th October 2011 a giant replica of Sydney Harbour Bridge made from donated food was erected at Campbell’s Cove in Sydney to raise awareness of the thousands who are without any food at all in Australia, in a country that calls itself lucky.

Australians shouldn’t have to wait for a flood, for a bushfire or emergency to show their fighting community spirit. Practically you can help someone in need by simply donating a can of food, by giving funds, or by volunteering your time to help pack food. Foodbank Australia is a social profit organisation that distributes food and grocery donations to welfare agencies, which feed the hungry. Statistics reported on their website are alarming. 12% of Australian children live in poverty and numbers are growing, not declining. 2.2 million Australians don’t have enough money to take care of basic needs. In 2010 and 11 Foodbank Australia fed 75,000 people every day but still it was not enough. Right now they need more friends, more funds and more food. If you have you a heart to help please follow our link This is a challenge for the whole community.

By learning from past attempts to stimulate social action in Australia, as well as successes abroad, by taking advantage of new technologies and by learning the lessons of behavioural science we can challenge the status quo. We can increase our levels of giving and mutual support in society, so that we can make social action an aspect of everyday life. In 1984 social action gave people the power to really change things, not just in their local area but in the world. We need to revisit that action, especially as we come close to Christmas time. Giving, in society, says a great deal about who we are.  In 1984 Irish singer songwriter Bob Geldof and his colleague Scottish guitarist, singer songwriter Midge Ure empowered their friends and colleagues by forming a ‘Band Aid’ group to help raise money to help victims of famine in Ethiopia. They recorded a Christmas song to remember.

Do they know it’s Christmas? 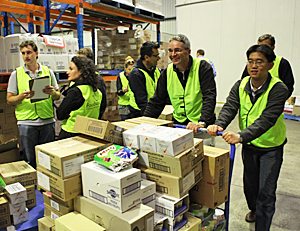 Its October and the stores are already stacked with enough tinsel and trimmings to cover an entire city near you. But surely Christmastime has to be about more than tinsel and presents?.

First we need a big band aid solution to help those in urgent need then secondly, we need long term solutions.

Did you know a staggering 2 million people in Australia rely on food relief at some point every year?  A million of these are children. The evidence is largely hidden, but the facts according to Foodbank are compelling and confirm that the need is growing, particularly amongst the working poor and the elderly.

Australia is deemed one of the richest economies in the world and so it is very difficult to conceive of the figures quoted.

Australia, despite a strong economy has hungry people in surprising numbers in every state, in urban as well as rural communities, in all age groups, and in nuclear families as well as single parent households. Last year Foodbank distributed over 21 million kilograms of donated food, which met only part of the need. Foodbank’s target for 2015 is 50 million kilograms, which they hope will bring them closer to achieving a vision of an Australia without hunger.

Help Foodbank to make a difference and to bridge the hunger divide Visit www.facebook.com/FoodbankAustralia and show your support Sip on Healthy Skin Tea and soak in a hot tub infused with Sacred FLora Both Soak and you will maximise the experience provided by Ya-Lu Blue Tea Bar, Melbourne