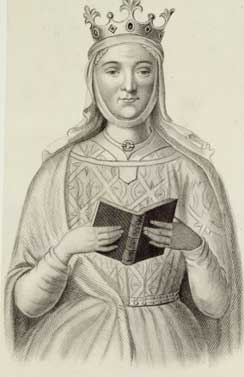 Eleanor of Aquitaine was in her time the most famous woman in the world. She grew up at the court of her troubadour father William X Duke of Aquitaine, renowned as being at the cutting edge of early 12th century culture. At 15 she married the Dauphin of France and within days the old king died and Eleanor and Louis ascended the throne. She was put aside because she only gave her husband two daughters. She then married a renowned philanderer, Henry, Count of Anjou and Duke of Normandy who became Henry II, King of the English. She bore him five sons and three daughters during a tempestuous relationship. As a result of his capriciousness, she supported their sons Richard and John in a rebellion against him and he imprisoned her. When her son Richard 1, the Lionheart went on crusade she became Regent of England, raising the ransom for his release when he was captured.