From the earliest times gardens were associated with shade, running water; fragrance and fresh produce and therefore represented peace and prosperity. Each visit to a garden is a unique experience because its plants, ornaments, views and garden buildings appear in a sequence that can never exactly be repeated ever again. Another quality, not possessed by any other work of art is the intensely evocative dimension of scent.

Christians and Muslims believe that water is a symbol of moral and sacred purification and that the origins of an idealized garden are encapsulated in the Song of Solomon from the Old Testament.

A garden locked is my sister, my bride,
A garden locked, a fountain sealed.
Your shoots are an orchard of pomegranates
With all the choicest fruits, henna with nard,
Nard and saffron, calamus and cinnamon,
With all trees of frankincense, myrrh and aloes, with all chief spices – a garden fountain, a well of living water, and flowing streams from Lebanon 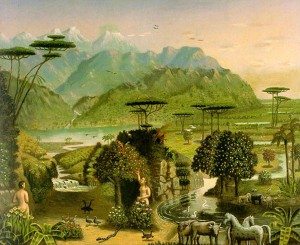 The Old Testament book of Genesis describes the idealized pattern of garden… ‘and a river went out of Eden to water the garden and from hence it was parted and became into four heads’. The four square garden signified the four quarters of the universe with the four rivers of life intersecting at the garden’s centre.

From ancient times four signified what was solid, what could be touched and felt and its relationship to the four points of the Christian cross made it an outstanding symbol of wholeness and universality, a symbol which drew all to itself’. The idea of paradise as a reward for the Muslim faithful translated to an earthly garden being an anticipation of heaven to come. Enclosed behind high walls with access through an imposing gateway at its centre four artificial rivers of life met in a square basin, a man made shape. The fourfold garden represented solidity, calm and home, the place where you could “plant” yourself. The symbolic meaning of the number four dealt with stability and invoked the grounded nature of all things. Four seasons, four directions and four elements were powerful essences wrapped up in a four-sided square package.

When the Persian world was conquered the promised Paradise with its fountains, water courses flowing into channels, shade trees and an abundance of green vegetation corresponded almost literally to the Prophet’s description in the Koran, which expressly speaks of a heavenly paradise as a central tenet of faith. This reinforced the importance of a garden and, accordingly the Prophet’s description were incorporated into the decoration the gardens that Sultans built to please him. 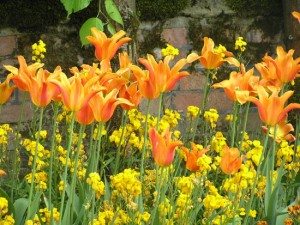 Green is a powerful colour symbolically associated with regeneration, fertility and rebirth. It has special significance for Muslims because Muhammad is quoted in the Qur’an as saying “water, greenery, and a beautiful face” were universally good things. Some scholars say green was Muhammad’s favourite colour and that he wore a green cloak and turban. In the Qur’an (Surah 18:31) it is said the inhabitants of paradise will wear green garments of fine silk. While our reference to the Qur’an is verifiable, it is not clear if other explanations are reliable or folklore.

Centuries of Muslim gardening development and scholarship would, over time, make an enormous variety of plants and their cultivation readily available to the western world. The following years were exciting as shrubs, bulbs and flowers, long familiar to Islam, flooded into Europe. They went wild for them, especially Holland who would over the centuries ahead make the tulip, that grew wild in Turkey, an integral part of both its culture and economy. In Islam the whole of nature becomes a symbol with each flower admired, not so much for its individual beauty, but because it is a reminder of the spirit of God.

The Rose has a special significance to the Muslim. By tradition it was created from a drop of perspiration that formed on the prophet Muhammad’s brow during his heavenly journey.

When the rose is faded,
Memory may still dwell on
Her beauty shadowed,
And the sweet smell gone.

That vanishing loveliness,
That burdening breath,
No bond of life hath then,
Nor grief of death.
‘Tis the immortal thought
Whose passion still
Makes the changing
The unchangeable.

Oh, thus thy beauty,
Loveliest on earth to me,
Dark with no sorrow, shine
And burns, with thee. 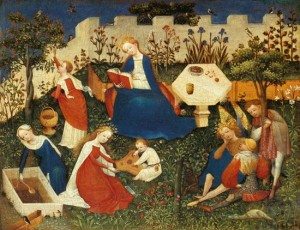 The Rose, delicate and ephemeral, represents the frailty of the body and the transitory nature of human life. In the language of flowers the rose has many characteristics, including simplicity and beauty. European medieval legend asserts that the first roses appeared miraculously at Bethlehem as the result of the prayers of a ‘fayre Mayden’, who had been falsely accused.

The idea of a medieval European pleasure garden was first recorded in c1260 in Dominican friar and bishop Albertus Magnus’ De Vegetabilbus et Plantis, which contained practical advice culled from the Pliny the Elder’s Historia Naturalis Book XXII ‘on the importance of herbs’ written in the first century.

This encyclopeadic work remained the great repository of knowledge throughout the Middle Ages in Europe; one everyone else would draw upon. Magnus suggested ‘about the lawn may be planted every sweet smelling herb such as rue, sage and basil … flowers as the violet, columbine, lily, rose, iris and the like. Between these herbs and the turf at the edge of the lawn set square, let there be a higher bench of turf flowering and lovely and somewhere in the middle provide seats so that men may sit down there to take their repose pleasurably when their senses need refreshment. 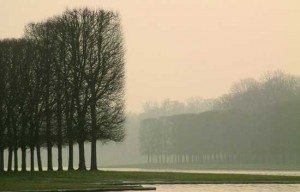 The human desire for more than a subsistence level lifestyle is fulfilled to a large degree by the beauty and visual satisfaction we find in gardens that by and large we can find no where else. A garden can provide a divine, inspiring or animating influence as well as many opportunities for visual artistic expression.

It is suggested modern civilisation ‘without its garden traditions may be judged impoverished, flawed and incomplete’ .

For those with strong and committed beliefs spending time in a garden of eternity is a desired goal while for others it is about finding paradise on earth,  a place of seductive solace far away from the stresses and strains of contemporary life, to dream.

Paradise Found is an aspect of our Online Video Course – Evolution of Art, Design & Style