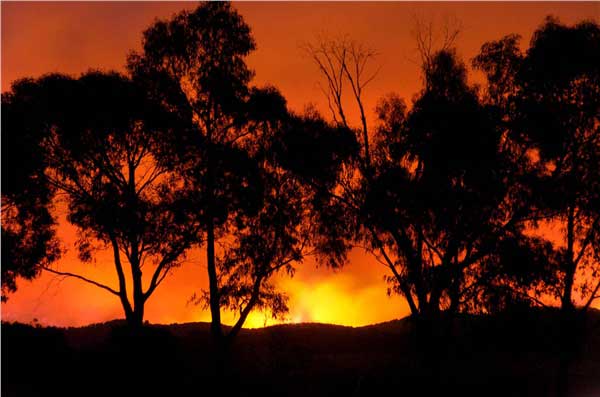 We are coming into the fire season again in Victoria, that period each year where the highest incidence of bush fires occurs in Australia.

Fire is a serious business, where many people are still recovering from the ruin of 2009’s Black Saturday, when the most devastating firestorm in Australia’s history claimed countless lives and millions of dollars worth of property.

Since then there has been many more, with Tasmanian and New South Wales Bushfires in 2013 destroying hundreds of dwellings. 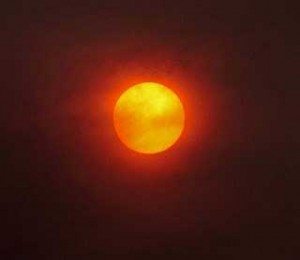 Fire has been present on the Australian continent for millions of years and is an integral aspect in the renewal and regeneration of its landscape.

Today our knowledge about the physics of any fire in Australia is informed by the history compiled since European settlement and the brilliant new ways of gathering forensic evidence about arson.

Despite all the information gathered for over two centuries many were still caught out on Black Saturday and ignored early warnings to leave.

Stay and go warnings were subsequently found to be not very clear or well understood and so many residents who stayed with their homes were included in the very large loss of life.

The fires also took place in some of the most designated dangerous high-risk areas in the world.

So why do we continue to build in such places when we know the risks. Are the reasons similar for those people who choose to stay living around the edge of a volcano or, to build on areas such as the San Andreas fault, despite warnings it is dangerous to live there? Why is it we do not learn from what has gone before? Why do people constantly put their possessions ahead of cherishing their own life? And, why is it we are reluctant to leave when faced with the cataclysmic fury of a fire?

The psychology about why humans fail to flee will surely need to be a major part of any form of future study in fire behaviour.

Is it about complacency, or about the ‘it cannot possibly happen to me syndrome’, that still exists at least here in Australia 200+ years after settlement in a countryside we know is volatile.

English military and the free settlers, who populated this place during its early colonial period, were well aware of the devastating effects of fires at home in England.

Today the English still prioritize warnings about what to do in case of a fire. Instructions are on view in every public space and place. They are all fiercely fire conscious.

Perhaps it is because they still have only one fire in mind, the like of which they never want to encounter again, as a constant reminder. 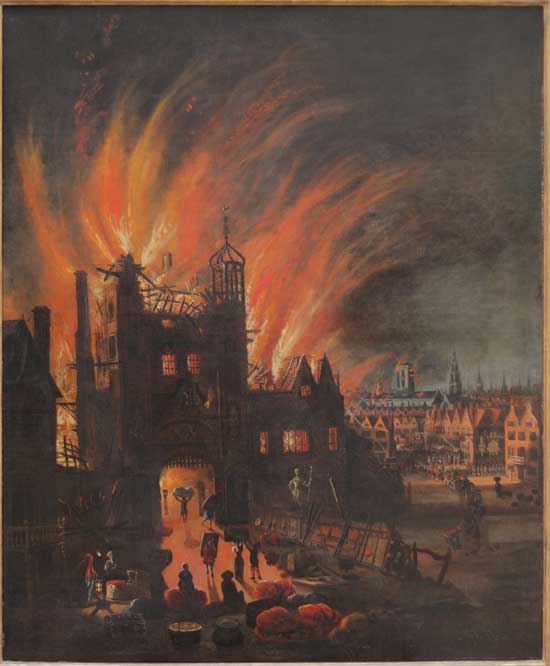 The Great Fire of London in 1666 has been re- examined many times in the light of recorded eyewitness accounts, contemporary documents, private papers and personal letters by people with a great deal of expertise.

They have traced the exact route of the fire, from where it started in Pudding Lane.

It did not only claim lives, destroy buildings, goods, people’s possessions and livelihoods, but also obliterated virtually every trace of the old medieval city of London, one that had been six centuries in the making.

In history endeavouring to discover how this fire started meant that a ‘line up’ of the usual, and some of the most unusual suspects.

They included foreign agents, religious fanatics, political factions and, the King’s baker Thomas Farriner in whose premises the fire started. The Duke of York and King Charles 11 were also on an extensive list.

It seems the King was known to be frustrated because he wanted to make drastic changes to the century old wood frame buildings and paper shack shanties that made up most of the city at that time. On 2nd September everything was in place just waiting for someone to light a tinderbox.

There had been a ten-month drought and the warehouses in the city of London, which was one mile square, were well stocked for winter with wood, coal and every other type of combustible material known to seventeenth century man.

Also a gale sprang up, providing just the right amount of oxygen to feed a fire once it had started.

It raged through narrow alleyways where the overhanging top storey’s of timber framed houses virtually met across the street allowing the fire to quickly catch hold and leap from roof top to roof top, much like the ‘devil himself’.

It was a case of hell on earth. 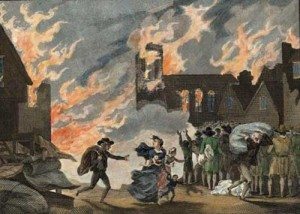 The Great Fire is a story of chaos and bureaucratic bungling. When the blaze began fire was a frequent phenomenon in the old city. So full of complacency, were the residents of London, that virtually everyone ignored it except for diarist Samuel Pepys.

He, being alerted by his maid that one had started not far from where he lived and, knowing that such information would win the King’s favour, he left his wife dozing and hastened away to Whitehall Palace where he could report on what he had seen.

Now to do this he had to walk a great distance, hire a boat to go upstream on the Thames to the old Palace, while all the way the fire was gaining a great foothold back in London. 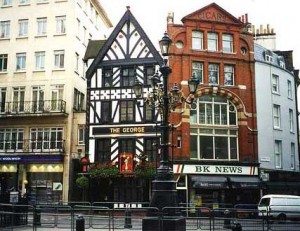 The George, a rare Great Fire of London Survivor

Once there, he had to make his way through the rabbit warren of old buildings (except for Inigo Jones new and superb classically inspired Banqueting House) that made up the palace precinct, giving an account of what was happening to a group of courtiers gathered in the King’s Chamber.

They then sent word to the King who summonsed Pepys beyond the Presence Chamber, through the Privy Chamber, Withdrawing Room and finally into the royal presence in His Majesty’s bedchamber.

There he reported to a King, as he recorded in his diaries, who was ‘reclining on his bed with his (King Charles Spaniel) dogs with the ‘stink of dog shit heavy in the air’…but then the whole court was reputedly ‘nasty and stinking’ despite the finery they lounged about in

It didn’t help what happened either that ‘visionaries’ had long heralded 1666 as a year in which hell fire, or damnation would rain down on sinful Londoners, 666 being the number of the Beast in the Book of Revelation.

As if it hadn’t been enough that the year before the citizens of London had been totally ravaged by the abominations of the Great Plague, which killed thousands of people.

Now there was also a threat of comets crashing or blazing stars smashing into the earth, which must have been a terrifying thought London’s thousands of illiterate and starving homeless people. The lechery and debauchery the court of Charles II was at the time becoming renowned for, only served to reinforce an earlier claim of members of the Puritan religion, that divine retribution would ‘lend a hand on the day of a dreadful judgement’.

The story of the Great Fire of London is still told in all its graphic detail to every English child.It is ingrained in the national consciousness. It is certainly not a tale for the feint hearted but it is a continuing reminder about the frailty of humankind when faced with ‘hell’ in the fury of a firestorm.

The French revolution in 1796 rocked upper class foundations in both Europe and England. A directory ruled France and the dashing Corsican General Napoleon Bonaparte became Commander in Chief. His victories on the battlefield were to shape chair styles no less than the themes of Grand Opera. Chairs lost their…