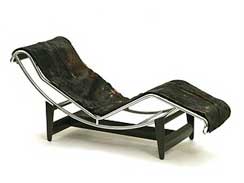 Charles Edward Jeanneret changed his name to Le Corbusier. As a modernist, he was primarily concerned with the least complex method of fitting form to function. His radical plans included replacing the historic centre of Paris with eighteen gigantic skyscrapers. Thankfully in this he failed. His books published between 1923 and 1955 had a profound international influence on town planning and building design. His first building Unite d’habitation was constructed at Marseilles between 1945 and 50 based on proportions calculated according to the human figure. Together with his brother Pierre Jeanneret and Charlotte Perriand he produced tubular chromed steel furniture using chromed or nickelled tubular or flat steel as a framework with plain veneers, leather or skin upholstery for the finishes. In 1925 at the “Exposition Internationale des Arts Decoratifs et industrials Modernes” Le Corbusier’s pavilion entitled “L’Esprit Nouveau“, allowed for a first public viewing of Modernism in France.

The National Gallery of Victoria in summer 2015 offers many wonderful shows and events for people of all ages to enjoy, to be immersed, inspired and invigorated