Flamenco Cuerdas is a vibrant musical entertainment show, which was part of the Queensland Music Festival 2013 series ‘Esperanto’ – bringing the world together one song, note, voice and drumbeat at a time. It’s a romantic idea, the bringing together of the world and its cultures with a single language.

Embodying the spirit of Esperanto, the Brisbane Powerhouse, a contemporary multi arts venue pulses nightly with music from a myriad of cultures and genres. Flamenco is one of them.

Flamenco Cuerdas means flamenco strings. The show is devoted to what those flamenco strings, both guitar or violin, can inspire in the Indian, Jewish, Arabic, gypsy collision of cultures that is flamenco. First mentioned in literature in 1774, the genre grew out of Andalusian and Romani music and dance styles and on November 16, 2010 UNESCO, which strives to build networks among nations declared flamenco one of the Masterpieces of the Oral and Intangible Heritage of Humanity.

Born at Brisbane, virtuoso guitarist Gerard Mapstone has put together an extraordinary group of musicians in a collaboration of flamenco guitar, dance, violin and percussion, providing enthusiasts with an opportunity to enjoy a passionate exploration of the flamenco style.

They include Jessica Statham (pictured) a Sydney based flamenco dancer who trained at the famous Amor de Dios academy in Madrid, James Hauptmann a Sydney based percussionist playing cajon an instrument originally from Peru, the supremely talented star violinist Brisbane based Shenzo Gregorio and the very elegant palmera Stacey Erbacher.

The group is called DaLeCANA FLAMENCO COMPANY and in the intimacy of the Visy Theatre at the Powerhouse as we all waited for the concert to begin anticipation began to build. The crowd that had filed in to the theatre’s dark spaces, sat in hushed silence as the stage, almost within touching distance, became bathed in a soft violet light, the leaf patterns on the floor like a dappled moonlit forest.

In a contemporary twist away from the strict origins of old flamenco the violin is substituted for the traditional flamenco singer. In this show, the violin ‘sings’ the letra (verse) and calls to the dancer to react.

Shenzo Gregorio adds an extraordinary dimension, weaving a multi-layered lyricism and counter-melody over the rhythm of guitar and the deep insistent pulse of the cajon. Opening the show was Asturias, a classical guitar piece originally written for piano by Spanish composer Isaac Albeniz (1860 – 1909) who, filled with nostalgia for his homeland and with a powerful romantic imagination, wrote music that evoked images of Moorish Spain, ancient stone fortresses and flamenco juergas, a late night party.

Next came the melodic alegrias, a flamenco style in a 12 beat compas or rhythm, which is rich and vivacious.  This was juxtaposed with a hauntingly beautiful Granainas written by Gerard Mapstone and considered his signature work to date.

Originating in eastern Andalucia, it is distinguished by its melodic style and guitar chords and unlike most palos or flamenco style pieces, it doesn’t have a rhythmical framework.

It has an almost Baroque feel, which is all about intimacy and interacting with the audience. This offering evokes the Spanish custom of ‘el paseo’, a social stroll traditionally in early evening along the streets of Spanish towns with family and friends with no real destination.

This is the first moment we see Jessica Statham take to the stage.

There is a sinuous grace to her choreography for el paseo and the evening air of a Spanish street suddenly becomes warmer hinting at a sultry earthiness.

Throughout the show we are treated to a melting pot of cultural influences.

When Shenzo reached for his purple violin with cello strings, we knew we were about to be treated to something special. We weren’t disappointed.

The instrument he played has a haunting mesmeric quality, which is almost Celtic, evoking images of a medieval forest, mists and meditations. 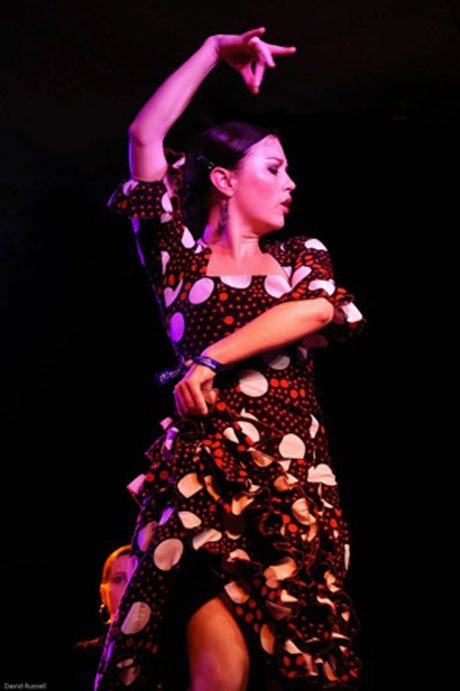 The music was composed by Gerard and titled ‘Nacer’ which means ‘to come into being’. He explains the inspiration for the work as finding yourself in an optimistic place after years of struggle.

In his own words ‘when you reach that point in your life and you realize the things that have changed for the better, and you’re in a place where you’re hopeful’.

We were all rather hopeful the music would never stop.

A popular inclusion in the set list, Almoraima by Spanish guitar great Paco de Lucia (1947 – ) is a groundbreaking bulerias emphasizing the Arabic influences, which run generously through flamenco music. At the end, the music slowly fades out, with a nod to the theory that masterpieces never have an end, it’s up to the listener to add the last note and to be a part of the message.

The audience did, and the final note was a grace note.

The stunning Solea por Bulerias is the style that Jessica chose for her solo dance. It is a palo that sits between the two styles of solea, a darker more somber feel and bulerias, more upbeat.  They share the same 12 beat rhythmic structure but as the solea moves into the bulerias, the tempo increases, the mood lightens the atmosphere becomes more electric.

For Jessica, it is her palo of choice ‘It rings true in me and I feel at home in it. It has dynamics and power.’

Her stage presence is rich and mesmeric and she owned the stage for the next fifteen minutes as she called for an emotional response from the audience and we felt included in her private world for just a moment. 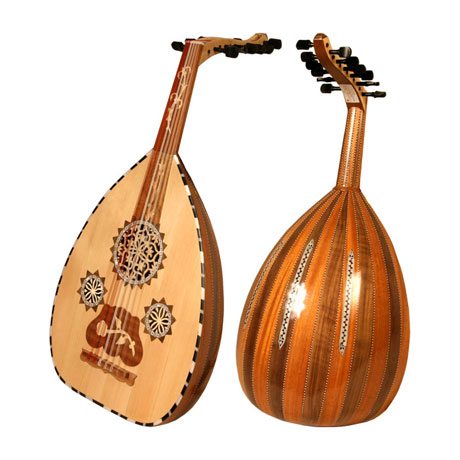 The evening’s performance ended on an exhilarating high note with a spontaneous festive bulerias de jerez, the kind of improvisation you would find at a late night flamenco party somewhere in the heart of southern Spain. Then the music stopped, the dancer left the stage and the spell was broken…until next time.

In terms of what’s next for DaLeCANA, this is a group that has found their groove together.

James Hauptmann is so tuned to the rhythm of Jessica Statham’s feet he can lock in to her rhythm as if the two are one.

They have all worked together in various different ways over the last few years so have adjusted to each other’s tempos, blending and matching rhythms and moods.

Gerard has been working with South American and Cuban musicians of late.His new acquisition is the Oud (pictured) so we can expect to see some Moorish influences appearing.

He will also be releasing a new album with Shenzo in the near future..

He makes no secret of the fact that ensemble work, rather than solo guitar is his preference. He enjoys the collaborative side of flamenco and has chosen to surround himself with artists who feel free and unafraid to express themselves.

He will be touring the show around Australia in the coming months. There are some exciting times ahead for this group of performers and we look forward to exploring new territory with them.

Maybe the most powerful feeling you can be left with following a great flamenco show is wanting more – more passion, more poetry, more flamenco dancing, more cuerdas. And maybe that’s what cuts to the very heart of flamenco. It makes us yearn.

In the meantime, there is the memory of moonlight in New Farm Park, old stone walls illuminated with soft light, the sound of laughter from the bar, red wine and late night flamenco.