Music is cheerful, joyous and celebrates an abundance of life. 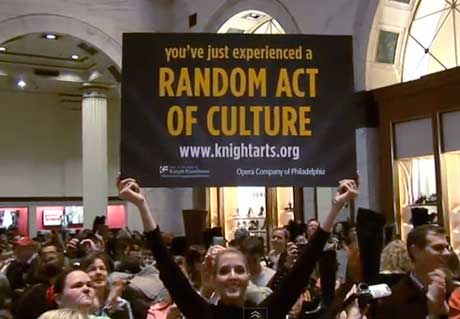 All forms of art should always be elite, but never elitist. A random act of culture, as performed by a musical flash mob, deserves to be applauded in so many ways. However these days if it is to proceed and continue, it must also become a smart mob that behaves intelligently and within the law. A musical flash mob provides people from all walks of life and all backgrounds with an opportunity to come together on the spur of the moment to create a memory, that when remembered, will for a long time in their lives cause them to smile.

It’s certainly brilliant that it steps outside the box of conformity to celebrate spontaneity and take back to the people performance art forms hijacked over the last fifty years to become almost exclusively the preserve of a modern corporate aristocracy. 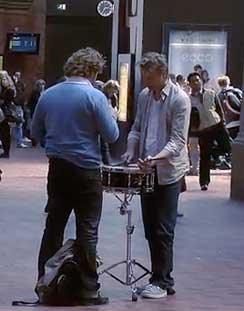 Let's start at the very beginning, a very good place to start... Ravel's Bolero, drumming up an audience at Copenhagen Railway Station

Since 2003 the instant public performance art movement that sees elite style music now played in places where a majority of people gather, the railway station, the shopping mall, the park and so forth has grown gradually. It has been interesting to see the reaction world wide. The people love it. because its all about a moment of unexpected sheer delight. It sets hearts racing and smiles broadening.

From a choir singing George Frideric Handel’s soaringly splendid Hallelujah Chorus magically in Macy’s Department Store at New York in November 2010 to a great piece of pomp and circumstance, the playing of Ravel’s hypnotic Bolero by the Sjællands Symfoniorkester (Swedish Symphony Orchestra) at Copehagen Railway Station on May 2nd 2011, the musical flash mob has become cultural phenomenon that should be encouraged and licensed by smart councils and local governments to happen regularly.

These magical moments reach out to children of all ages, inspires young adults and re-inspires those who are more mature. It also motivates musicians and singers to strive to ensure their music remains ‘elite’ and to save it as an art form so that it can continue to be enjoyed well into the future. A musical flash mob allows many to enjoy and experience a moment of beauty one on one. As an art form it crosses all boundaries in its quest to achieve excellence and is admired by people from all walks of life.

Enjoy Ravel’s Bolero and then read on 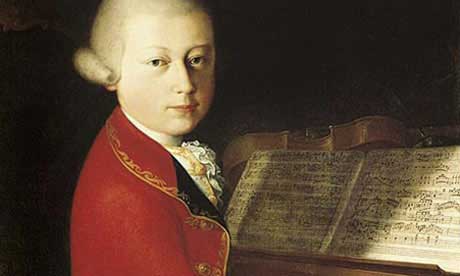 From my experience opera when performed in a public place always receives a rousing welcome. There is a great deal of difference in listening to a piece of opera music on a CD via headphones than being in a place where its being performed by musicians first hand. Mozart’s opera The Magic Flute, a tale of triumph of courage, virtue, and wisdom was first performed in a suburban theatre, rather than at court. Mozart himself conducted the orchestra, his sister in law sang the role of the Queen of the Night and Emanuel Schikaneder, who had provided the libretto played its popular character, the bird catcher Papageno. Opera is really all about humankind, its advancement through trial and error and love and life. But in order for it to survive as an art form, opera companies like that at Philadelphia, which organized many of that cities choirs to perform in Macy’s near to Christmas, need to continue to step outside the norm and challenge themselves for the good of their art. When Campbell Newman was Lord Mayor of Brisbane he supported an initiative at Brisbane City Council, Operapolitan, which brought opera events to the wider community in the Brisbane metropolitan area from 2006 – 2008.

He wanted to ensure that a lot of people in Brisbane city had an opportunity to experience something beautiful by taking opera from the concert hall to the shopping mall. The repertoire featured works from the traditions of opera and operetta, plus songs from musical theatre, the movies as well as cultural and contemporary songs. They entertained with wonderful songs, arias and duets such as O Mio Babbino Caro, Nessun Dorma, La Donna Mobile and My Heart Will Go On. 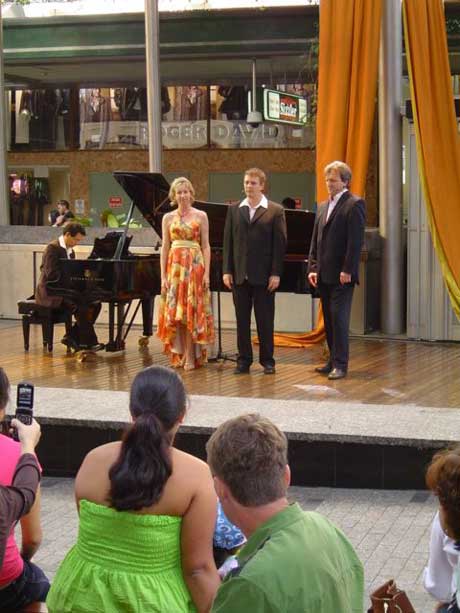 The crowds were phenomenal. There were people from all walks of life and all backgrounds.

The courier on his daily round who kept looking at his watch, but taking time out to drink in the atmosphere, the busy P.A. who hoped her boss would wait a few minutes longer, the construction workers from the site next door, the tradies on break, the blue collar workers in their suits, the secretaries and so many more.

There were couples with babies holding them up to hear the music, children on holiday rushing to sit down to listen, mothers, grandmothers, boys and girls.

The team of singers gained a following of families, who went to every shopping centre performance becoming opera groupies. One Italian family brought along their grandfather who had always loved opera, but he had never seen it performed. Not even back in Italy before he and his wife migrated, where opera is considered by all the people as their own.

Dear Grandfather was so overwhelmed with joy at the first and second concerts he was crying with happiness. When it came to the final concerts weeks later, to the team’s dismay they discovered that he had died. In his honour the rest of the family turned up for the final performance and this wonderful tribute touched everyone involved and it’s a memory they will carry with them forever.

Musical flash mobs showcase to the rest of the world the best of the many democratic freedoms we in the west enjoy. The musical arts reflect the maturity of contemporary society, and alongside all the other visual arts, represent the very essence of our culture, its attitudes and philosophies its fashions and passions.