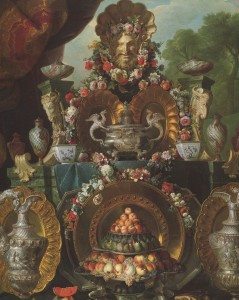 French Chef Francois Massialot was Cuisinier Royal at the court of Louis XIV (1638 – 1715). He set a standard for dining throughout Europe from 1698 when he used flowers to decorate the dessert remove following a great dinner. Other descriptions of flowers decorating the dessert at Versailles include one with twenty-four silver pots filled with fabulous flowers and one with potted flowering shrubs decorating the table for dessert, hung with preserved fruit and ribbon garlands. At a gala a vase of silver filigree held an orange tree covered with flowers and fruit. Around its base was sixteen baskets and vases filled with flowers. Another momentous occasion saw tables covered with turf as green as if it was the month of May encircled with garlands charged with leaves, flowers and fruit. This was laid out on round tables made fashionable by Louis, who wanted a clever way to defy protocol and place his mistress the Marquise de Maintenon opposite him, rather than at the far end of a long narrow table. At the turn of the eighteenth century A.F. Desportes recorded in a painting a multi-tiered buffet set up for a banquet at Versailles. Garlands festooned the shell-framed mask of Pan and tumbled over the plates and dishes.

Over a 40 year period artist Robert MACPHERSON has presented works that appeal to a broad cross section of people, challenged both intellectually and culturally